Round Robin and contactee history

In October 1983 AFU received a large and well-preserved collection of books and magazines donated by Mr. C. O. Holmquist, Rockneby, Sweden. Among the different sets of magazine issues dating back to the 1940s were an almost complete set of Round Robin, volumes 2-34 (1946-1978). Round Robin was edited by Meade Layne, who founded Borderland Sciences Research Association (BSRA) in San Diego 1946. This publication is a unique document and a basic source of data on early UFO contactee history. I have for years been trying to find the missing early issues to make the AFU collection complete but so far no luck. 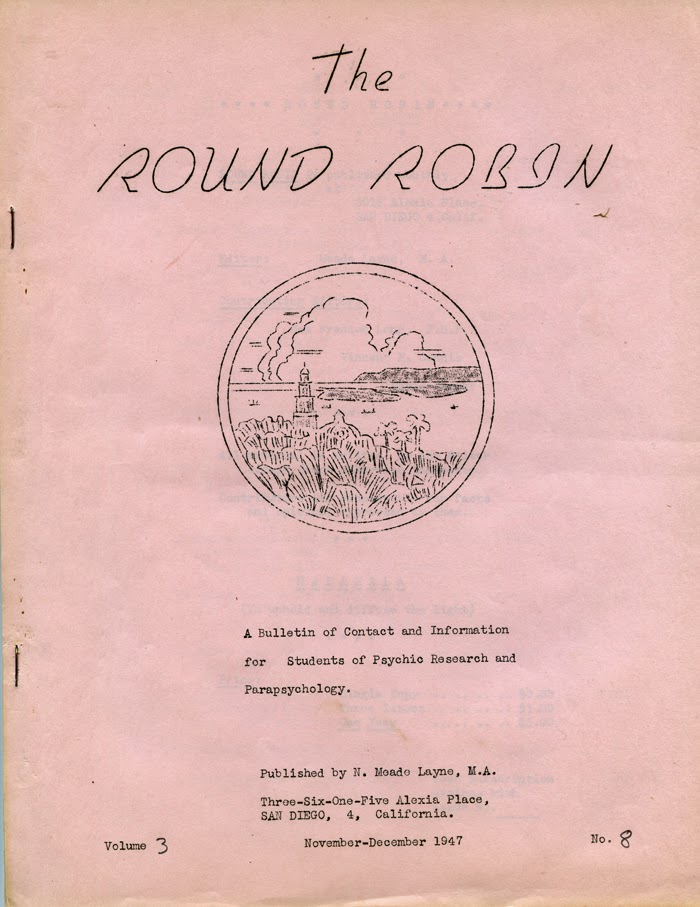 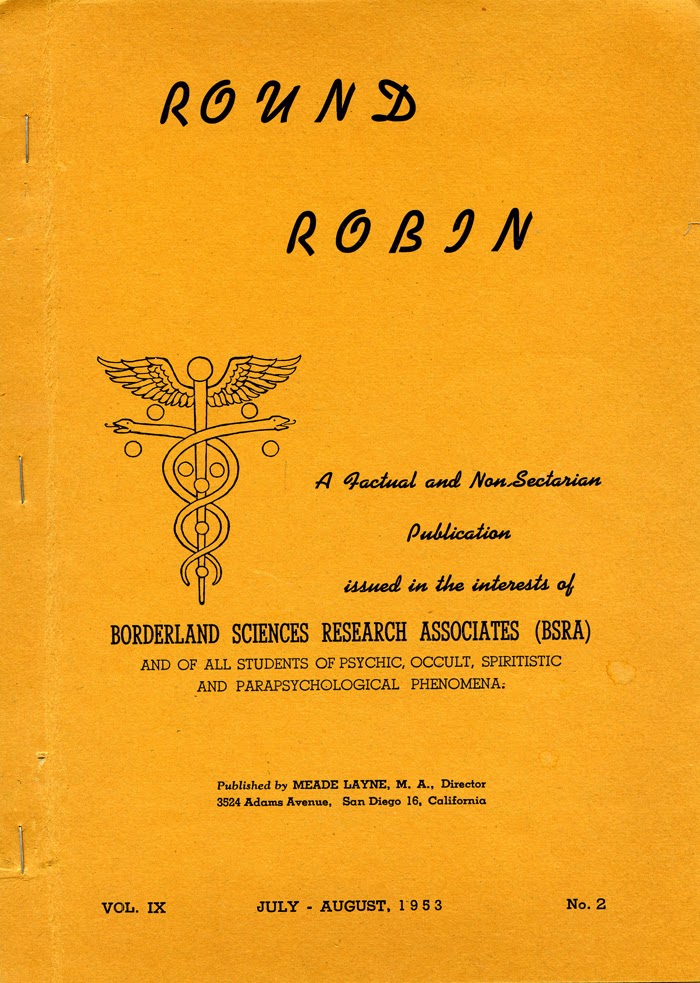 A few weeks ago I found a very informative article, Newton Meade Layne as Fortean, written by independent scholar and Fortean Joshua Blu Buhs on his blog From an Oblique Angle. Joshu also mentioned that he had found a complete set of Round Robin at the California History Room Section of California State Library. I sent an e-mail to the library requesting information about the possibility of receiving photocopies of volume 1 of Round Robin. On March 10, I was informed by Ms. Katleen Correia that volume 1 of Round Robin contains approximately 230 pages and that the library is "unable to provide such extensive photocopying." She referred to various private researchers who could provide the service for a fee. As AFU is a not very rich non-profit foundation I hope some ufologists or forteans in California could give us some help instead?

There is much interesting historical data on early UFO contactees to be found in the early issues of Round Robin. The San Diego area was something of a cradle for the UFO contact movement. And it all started on October 9, 1946 when hundreds of witnesses observered a UFO over San Diego. In the classic Flying Saucer Have Landed George Adamski present his version of what happened:
"I had never given too much thought to the idea of inter-planetary travel in man-made ships. This subject had never entered my mind until late in 1946. I, too believed the distances between planets to be too great for spanning by mechanical constructions. But during the meteoric shower on 9 October 1946 I actually saw with my naked eyes a gigantic space craft hovering high above the mountain ridge to the south of Mount Palomar, toward San Diego. Yet I did not realise at the time what I was seeing. As many of us will remember, people everywhere were asked to watch the heavens that night and count the numbers of meteors falling per minute. 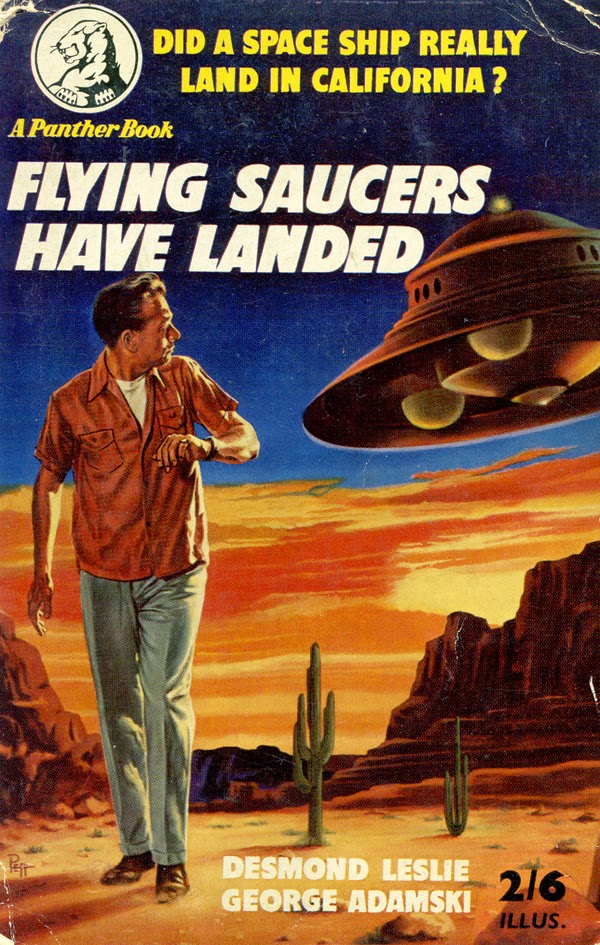 This we were doing at Palomar Gardens. When, suddenly, after the most intense part of the shower was over and we were about to go indoors, we all noticed high in the sky a large black object, similar in shape to a gigantic dirigible, and apparently motionless. I noticed that no cabin compartment or external appendages were visible, but I figured that during the war some new types of aircraft had been developed and that this was one of them. My calculation was that it was up there to study the falling meteors at that high altitude, so I gave no further thought to it, except to wonder why it was so totally dark. While we were still watching, it pointed its nose upward and quickly shot up into space, leaving a fiery trail behind it which remained visible for a good five minutes.

Still thinking nothing of it, we all returned into the house and turned on the radio to a San Diego station where a newscast was being given. All of us were surprised and incredulous as we listened to the announcer say that a large cigar-shaped space ship had hovered over San Diego during the shower and that hundreds of people had seen and reported it. The description tallied with what we had seen."

Another witness to the San Diego UFO was the remarkable trance medium Mark Probert, who became an important member of the BSRA group. Meade Layne called Probert and suggested he tried to get some information from his contacts regarding the strange object. Probert received the message that the object was interdimensional (etheric) and the people on board had for years been trying to contact and wished to meet a committee of scientists at an isolated spot. 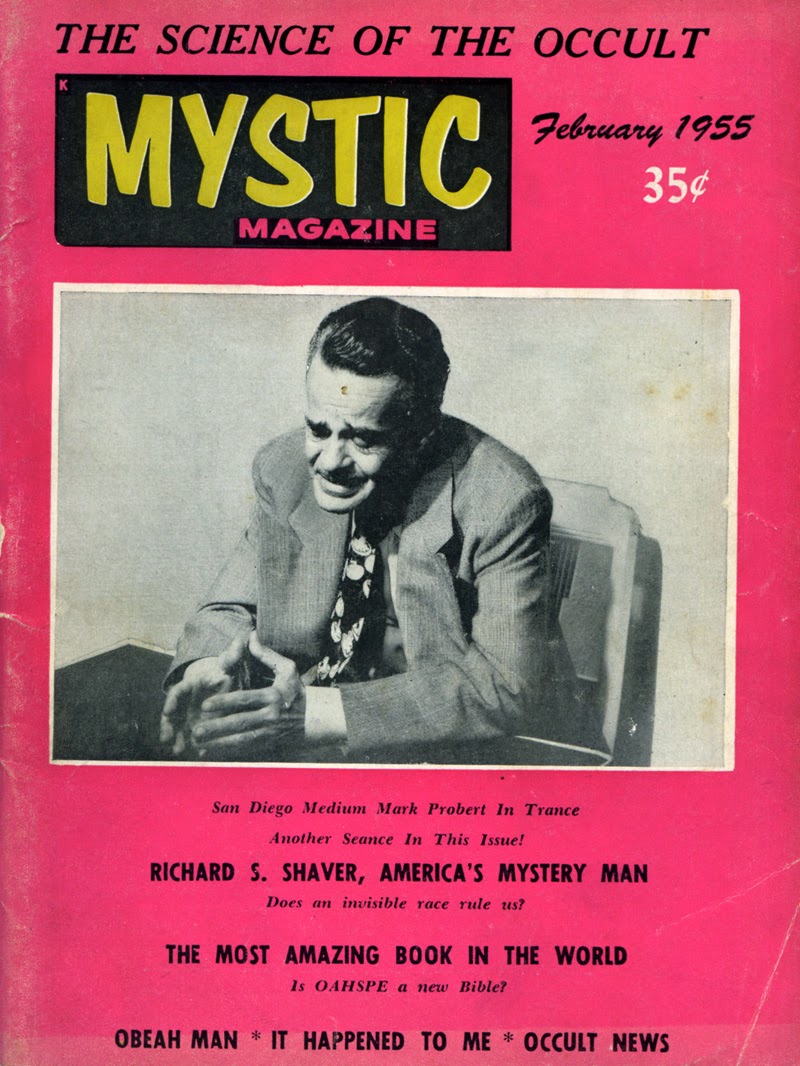 This was one of the first claims that UFOs represented aliens from another world. Obviously there was also some contact between George Adamski and the BSRA group, as reported in Round Robin, vol. 8, no. 5, Jan-Feb. 1953, p. 11). On January 3, 1953 Mark Probert and Meade Layne visited the Adamski home at Palomar Gardens and a seance was held. About a dozen people were present, among them George Hunt Williamson: "The discussion concerned the recent landing of a Disc and a brief interview between its occupant and Mr. adamski; also recent radio communication with the Disc people or Guardians." 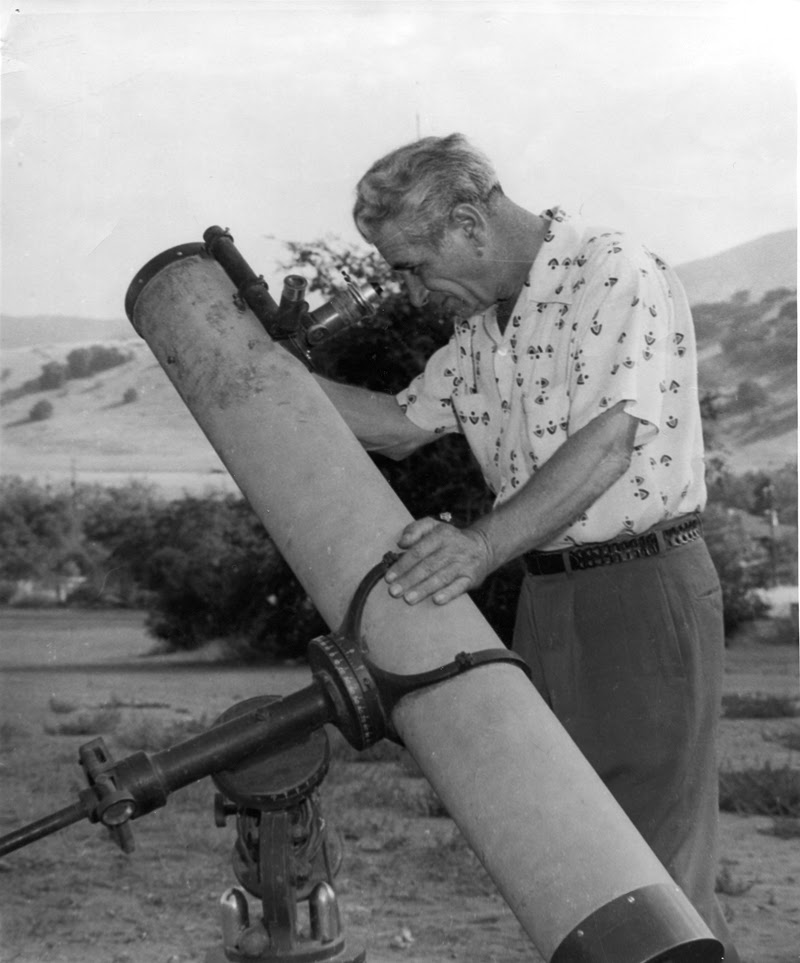 A study of the early BSRA history and the early issues of Round Robin could give many clues to the beginning of the UFO contact movement. Hopefully AFU will soon obtain a complete set of this unique publication.