What happened to Bevan Berthelsen?

This week I have arranged the organizational files of Köpings UFO-förening, one of the most active and prominent local groups in UFO-Sweden history. It was founded already in January 1973 and folded in 2004. During its heyday 1973-1980 it was directed by chairman Thorvald Berthelsen, who changed his name to Bevan Berthelsen in 1980. Bevan and Köpings UFO-förening, in many respects, laid the groundwork and changed the direction of ufology in Sweden to a more serious and scientific endeavor. 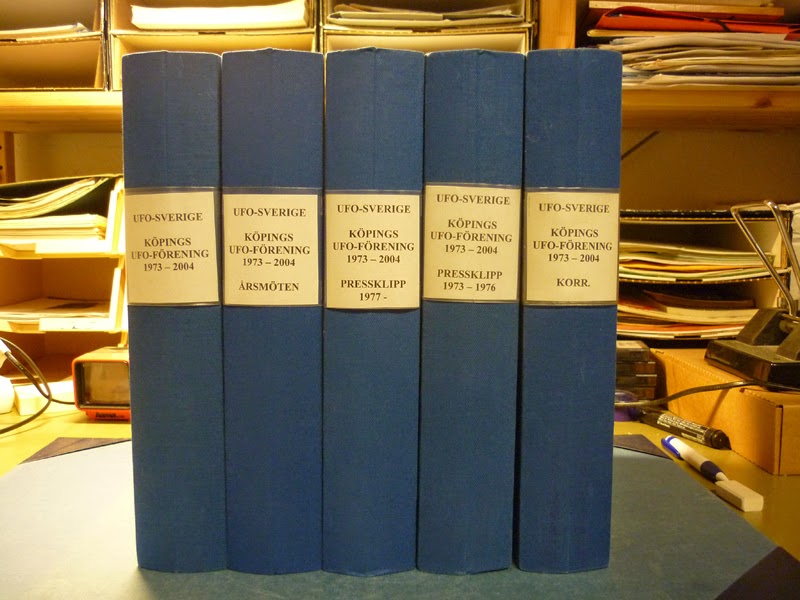 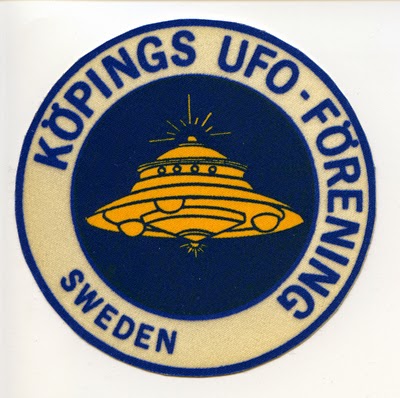 Thorvald Berthelsen entered the ufological scene with a fervent commitment and soon became a leading public figure and spokesperson for the Swedish UFO movement. Together with collegues from Köpings UFO-förening he started a massive information campaign ranging from November 10 to December 15, 1975. During these weeks he lectured in 22 different Swedish cities and travelled more than 200 Swedish miles. In many cities there were hundreds on listeners. A second information campaign was conducted between February 3, and March 23, 1976. As a result many local UFO groups were founded all over Sweden and many of the active ufologists today began their ufological career after hearing a lecture by Thorvald Berthelsen in the 1970s. 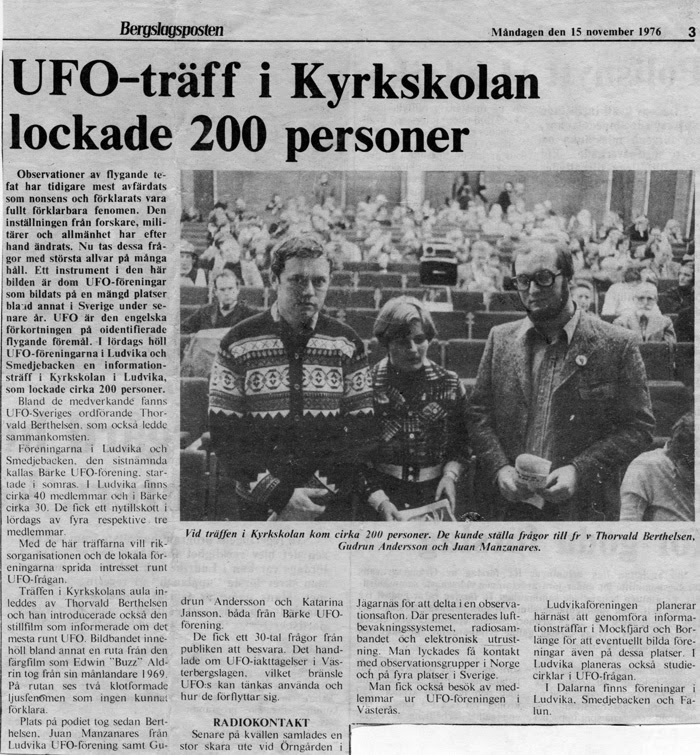 The local press reporting on the information campaign

In March 1976 Thorvald was elected the new chairman of the national organization UFO-Sweden. He immediately started reforming the handling and investigation of UFO reports and entered an informal cooperation with Swedish military and intelligence authorities. He initiated better and more critical investigative procedures and was one of the first to recognize that some UFO reports were in fact launchings of Russian satellites. 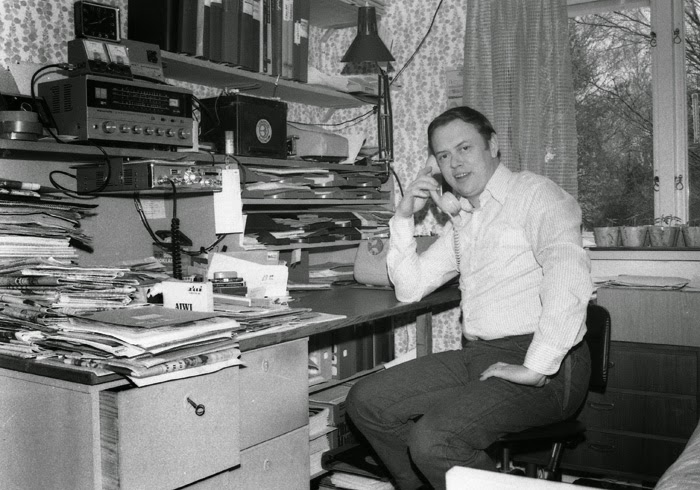 Thorvald Berthelsen at his home in March 1976 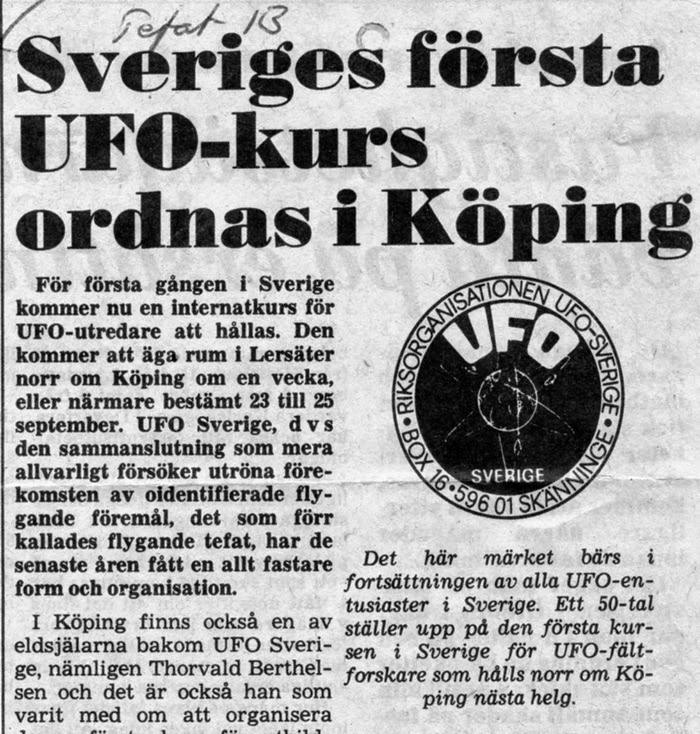 Nerikes Allehanda reporting on the first field investigation seminar in 1977

February 24, 1978 was the opening night in Stockholm for Steven Spielberg´s film Close Encounters of the Third Kind. Thorvald and the Köping group entered a massive advertising and media campaign in collaboration with Warner-Columbia. Information about UFO-Sweden was printed in the Warner-Columbia leaflets. Largerly because of the heavy media coverage the UFO-Sweden annual conference in Stockholm on March 18 was attended by 1.300 listeners. The largest annual conference in Swedish UFO history.

The next great PR event initiated by Thorvald and the Köping group was a large UFO exhibition at the Köping Museum in the summer of 1978. With economic help from the Köping municipality the exhibition became a huge success with more than 10 000 visitors. A large flying saucer model visible from the E18 highway attracted families on summer vacation. The model was 5,5 meters in diameter and weighed 250 kilo (551 pounds). 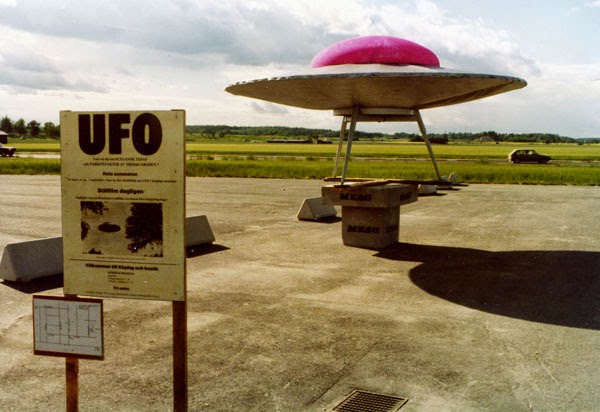 The many years of intense and dedicated activism for the UFO cause took heavy toll on Thorvald´s health and in 1979 he retired from his post as chairman of UFO-Sweden. At the annual conference on April 7, 1979, Birgitta Andersson was elected as new chairman. 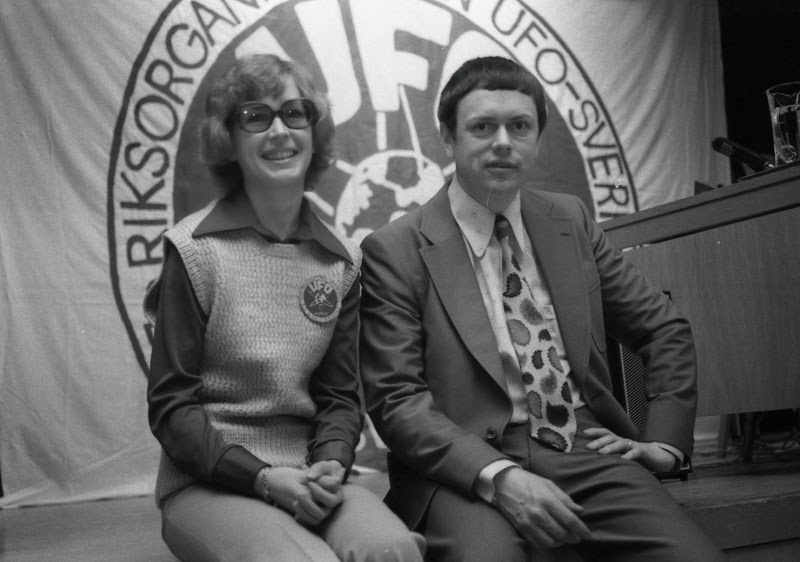 This is the open and visible history of Thorvald Berthelsen and his UFO research activity in the 1970s. But there were also a few intriguing and unexplained events not generally well known in Swedish UFO history. Some of these events were mentioned by Thorvald when I interviewed him on October 10, 1992. In the beginning of the 1970s he regarded UFOs as a "ridiculous, laughable" subject. But something happened in the summer of 1972 that was to change his life. 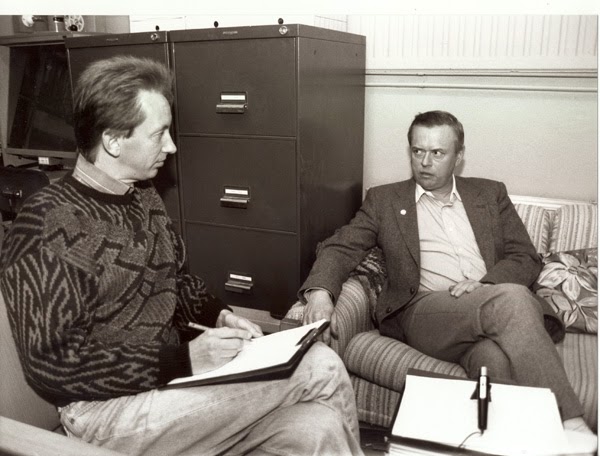 My interview with Bevan Berthelsen October 10, 1992

In the middle of one night in the summer of 1972 Thorvald left his bed sleepwalking. He put on his clothes, left his house and bicycled about two kilometer (1,4 miles) to an uninhabited plateau (Slätängen) with a few deserted crofts situated between the towns of Köping and Arboga. At this plateau he suddenly woke up, wondering what he was doing there in the middle of the night. Rather irrationally he picked a few flowers, found his bike and went back home where his wife naturally was curious to know what he was doing in the middle of the night, as he had been gone for several hours. Thorvald could give no logical answer as he was not a sleepwalker. To this day he is still puzzled by the event.

About a week after this curious episode Thorvald became intensively fascinated by UFOs and borrowed all books he could find in the local library. He soon contacted the UFO-Sweden organization and formed the local group Köpings UFO-förening in January 1973. On March 11, 1973 Thorvald, together with three witnesses from his workplace, observed a cylindershaped object silently passing over Köping. No explanation was found to this observation which was reported in local media. 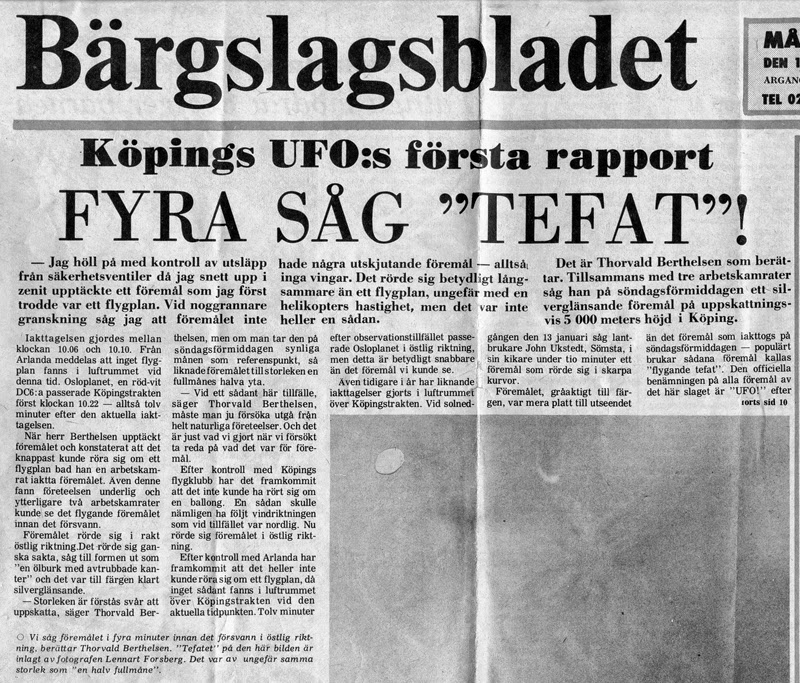 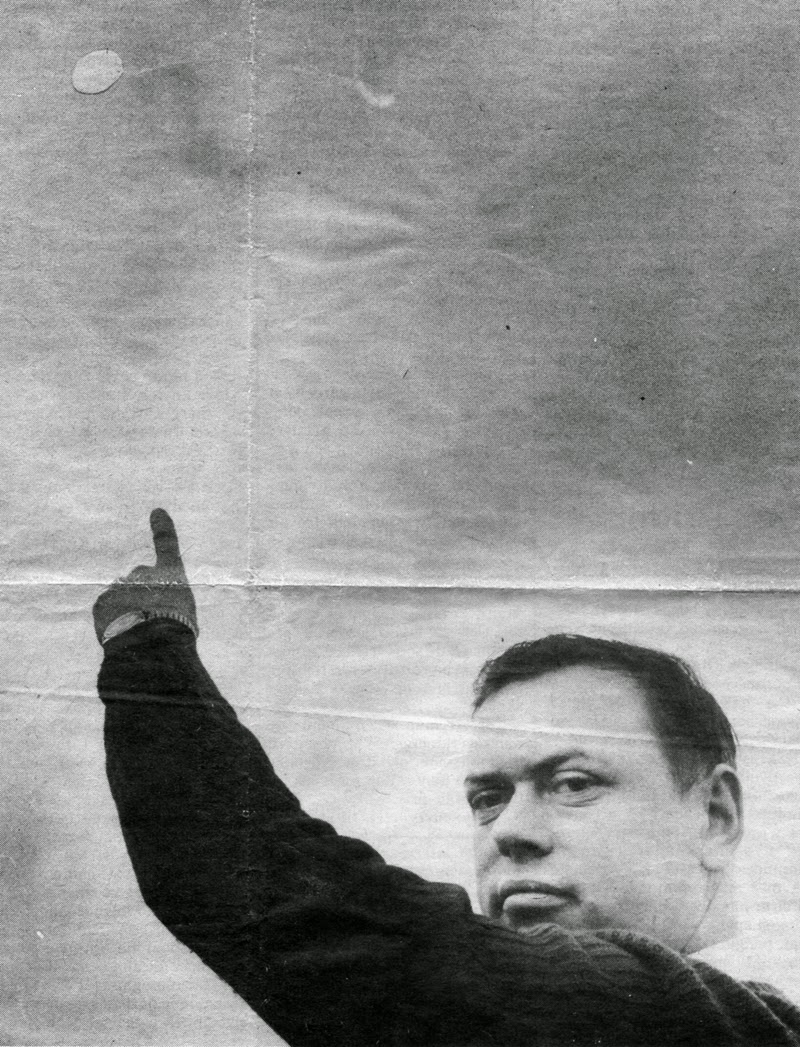 Thorvald Berthelsen and his wife lived in a country house with good views in all directions. On the same day his UFO observation was mentioned in the local newspaper a man knocks on their door. Bevan is met by a man in his thirties, dressed in a brown suit and white shirt. He has dark hair, appears suntanned and his eyes are slanted but still not Asian looking. The man ask Bevan how he is feeling and continue asking about directions. He says thank you and leave. "I thought, who the hell was that? I ran out and looked for him. The road was straight in both directions. If he had come walking I would have seen him. His eyes were slanted. That caught my attention. Afterwards I felt this experience was weird". For ufologists this is a classic men-in-black (MIB) experience. Or was it just an unusual man looking for direction? 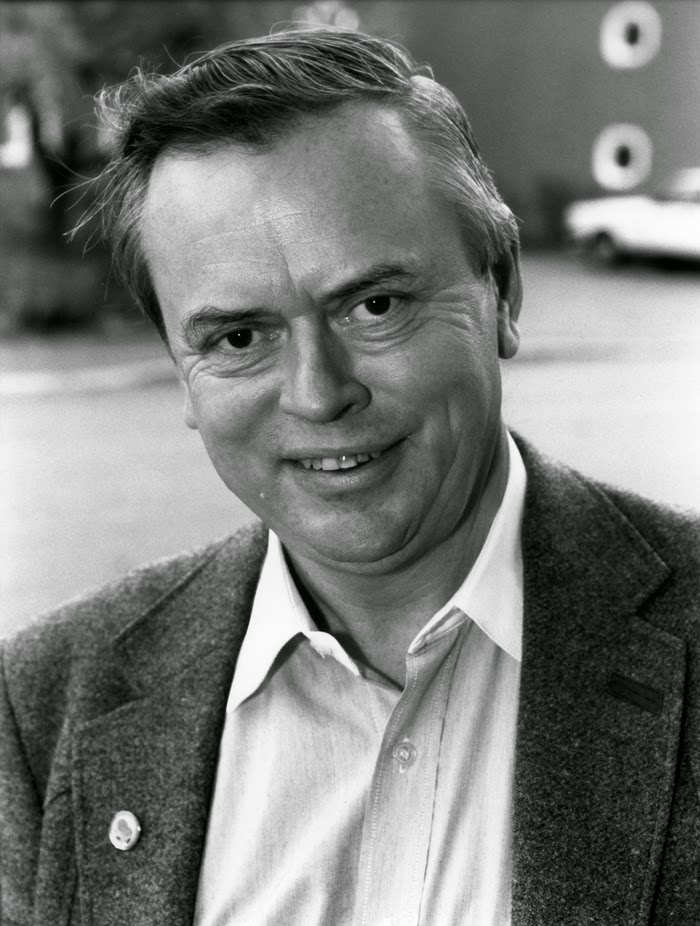 Were these events unusual coincidences? Or were Thorvald Berthelsen somehow "tagged" by whatever was behind the phenomena, as reported by several contactees and close encounter witnesses? To this day he has no idea and has refrained from speculating. In 1980 Thorvald left his UFO engagement and inspired by his wife entered Subud, a spiritual movement founded in the 1920s. He then changed his name to Bevan Berthelsen. When I asked him if he ever regretted his involvement in the UFO movement the message was clear: "No, it was fantastic years. A wonderful time."

As usual there is a steady stream of visitors to AFU. Guiding groups and presenting all our eleven premises takes quite some time so my collegue Anders Liljegren and I use to limit the presentation to four or five premises. This is more than enough for most visitors to get a good grasp of the staggering amount of books, magazines, clippings, correspondence and other archival records preserved at AFU. We don´t want interested beginners to develop mental exhaustion at their first visit to the archives.

On October 11 we were visited by Christian Forslind and Mattias Lövgren from the nearby city of Linköping. And on October 13, Anders and I guided a group of librarians with friends from Norrköping Public Library. It is always a pleasure to present the AFU collections to my librarian collegues as they of course are curious to enter and understand the literature of the strange underground world of ufology, Forteana and paranormal phenomena. 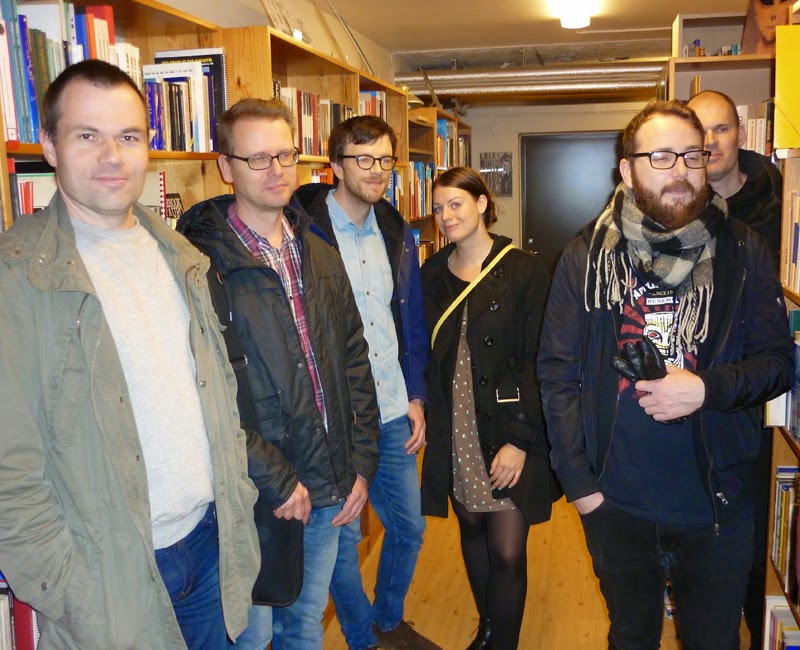 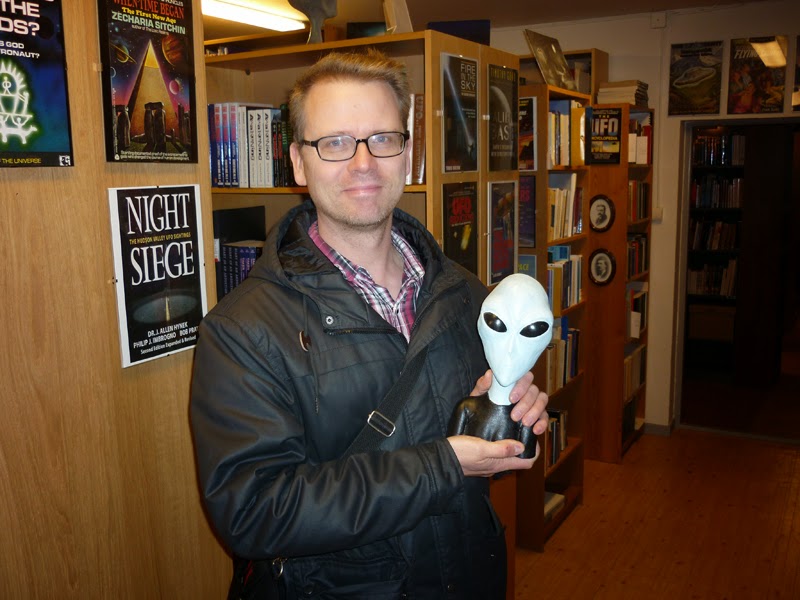 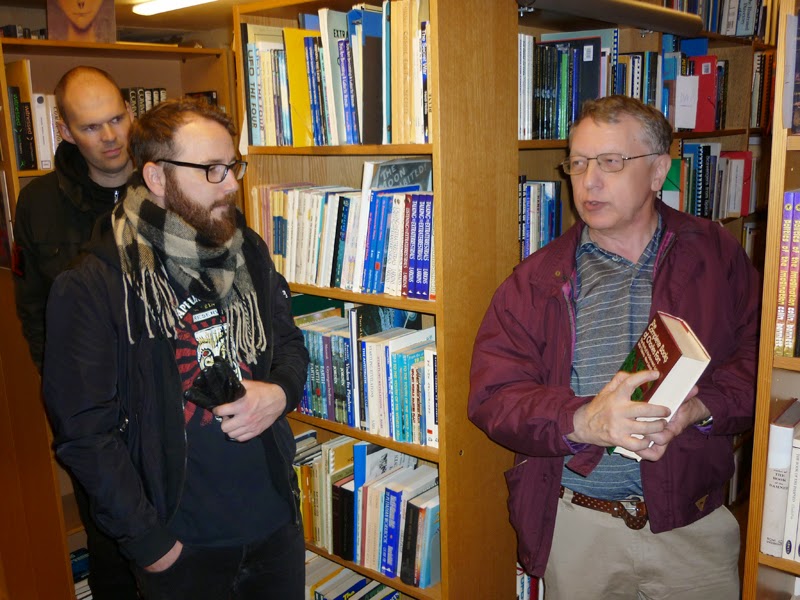 Our new visitors had a chance to peruse the impressive donations that recently arrived at AFU. 260 boxes of books, magazines etc from donors in England: Lional Beer, Bob Rickard, Omar Fowler, Busty Taylor, Bill Foley (Contact International), Peter Rogerson, Edwin Joyce (FSR), Bob Digby and the late Steve Moore. Especially fascinating was the large collection of books on the Kennedy assassination and related conspiracy theories from Peter Rogerson. There is also a small film clip from the C-archive on You Tube taken by Clas Svahn, which gives a good estimation of the size of the latest donation to AFU. 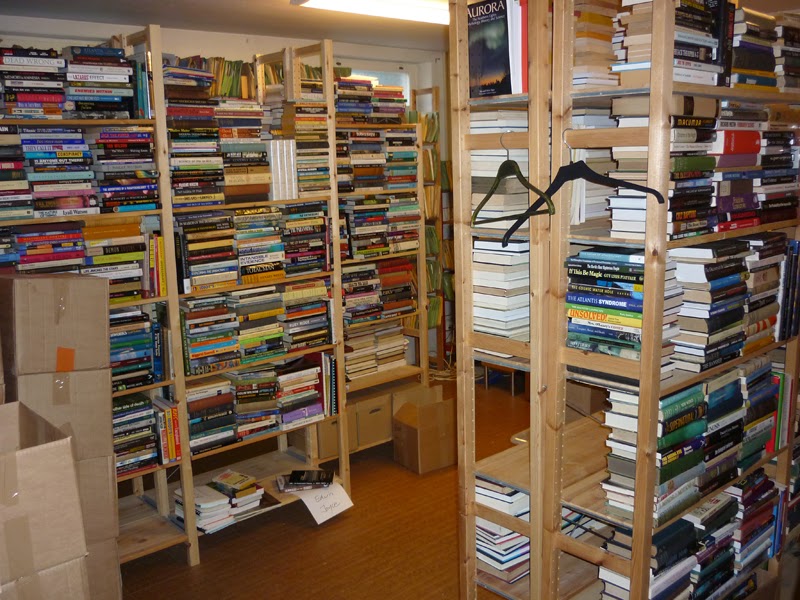 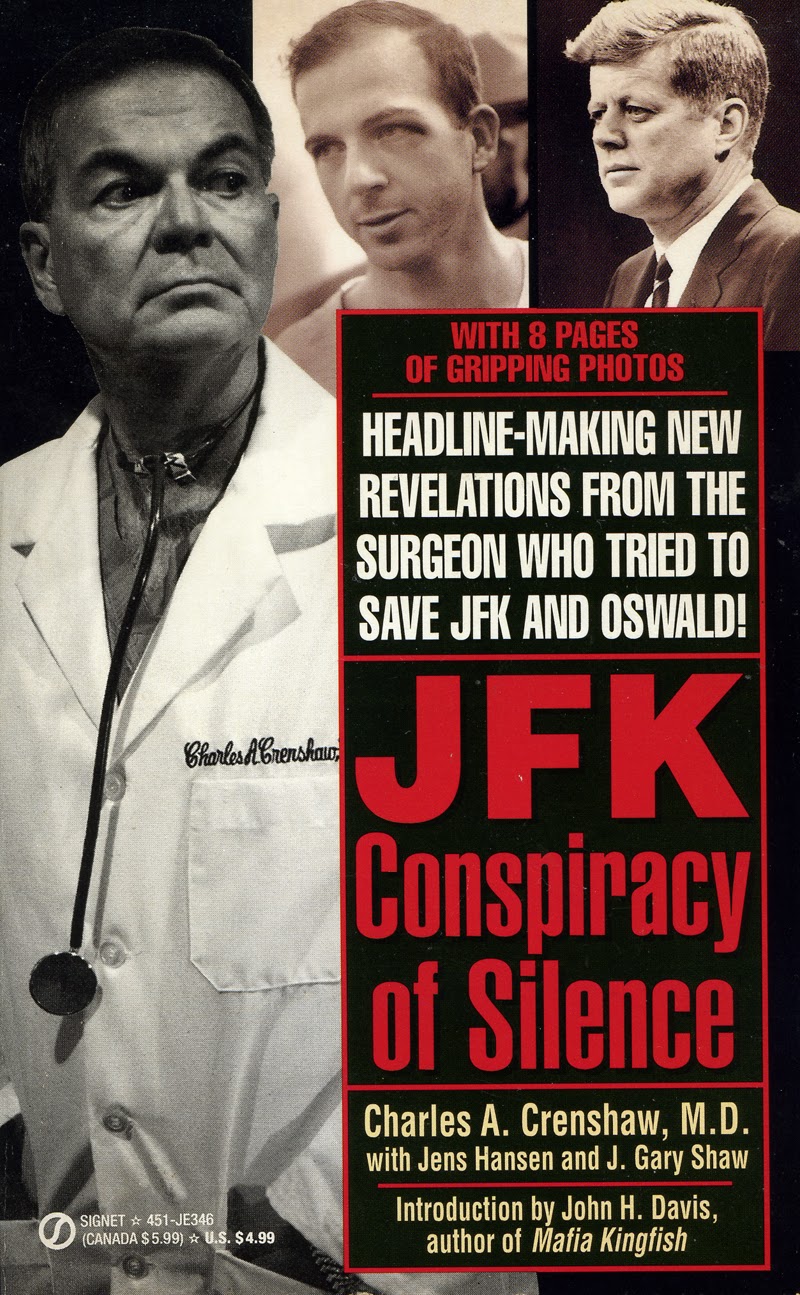 Unpacking the boxes I always feel like a small boy on Christmas. So many new and interesting titles and so little time to read. Below some titles from the Peter Rogerson collection. 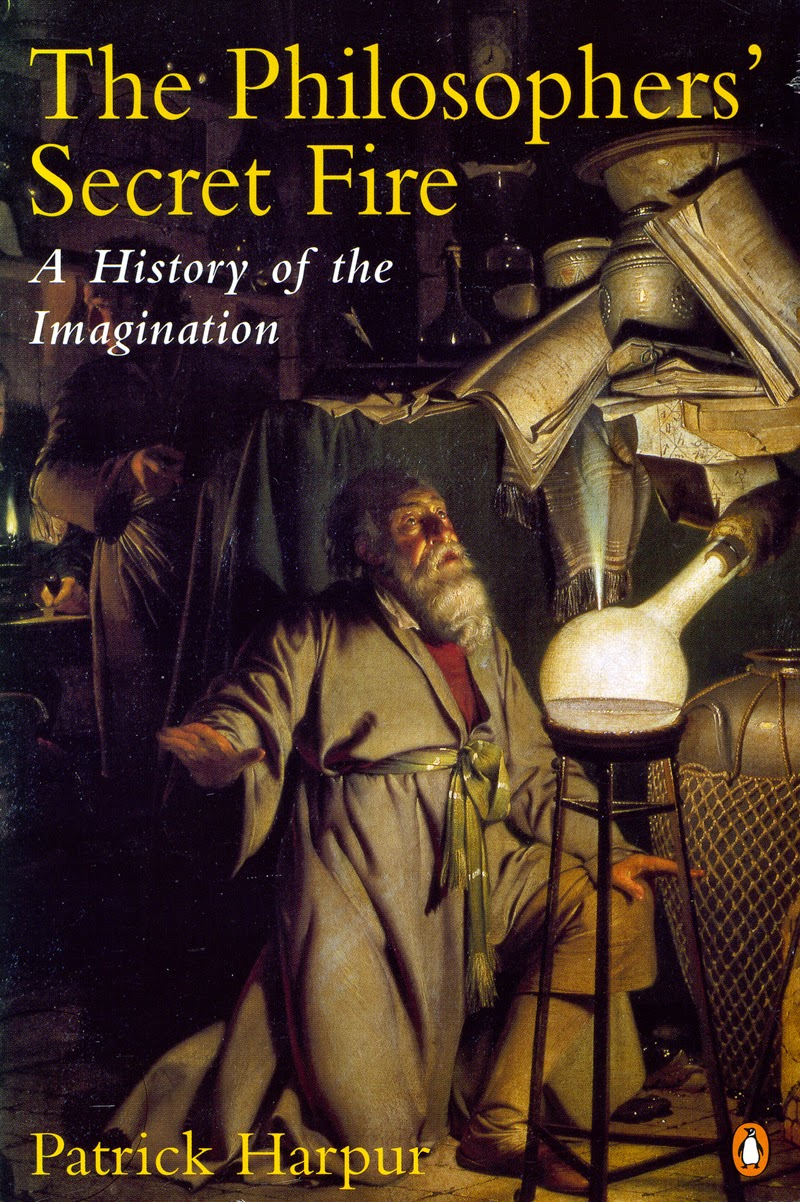 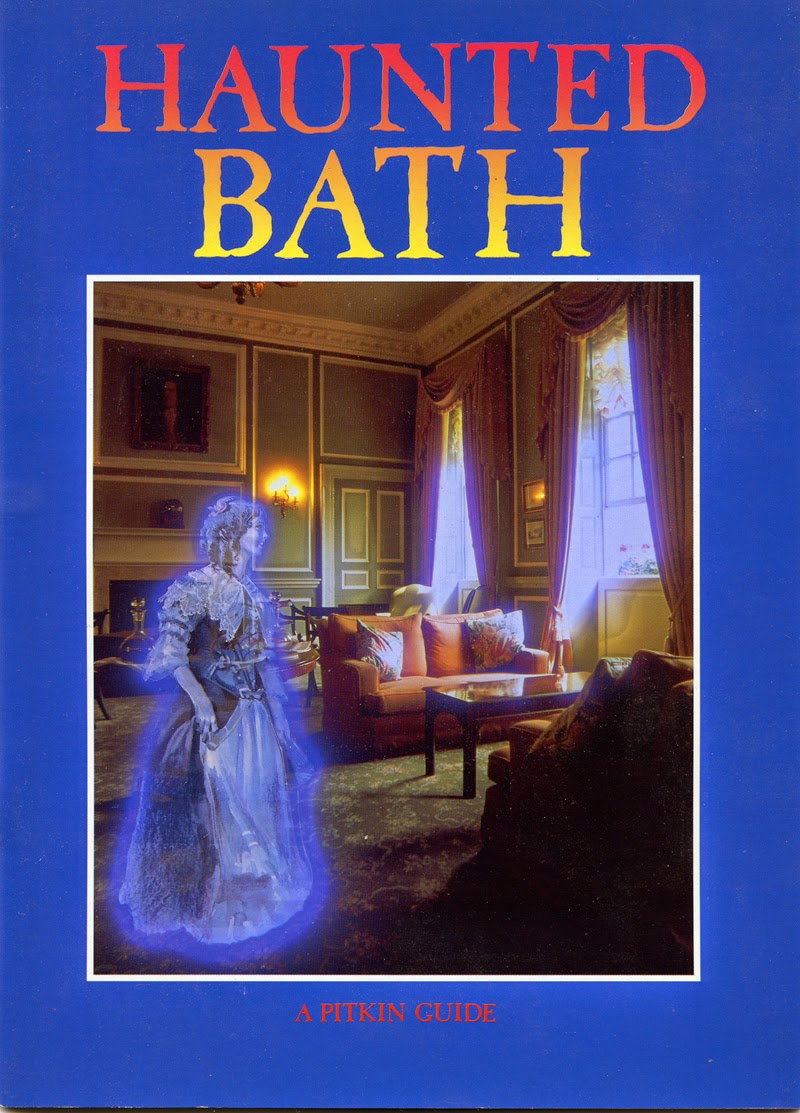 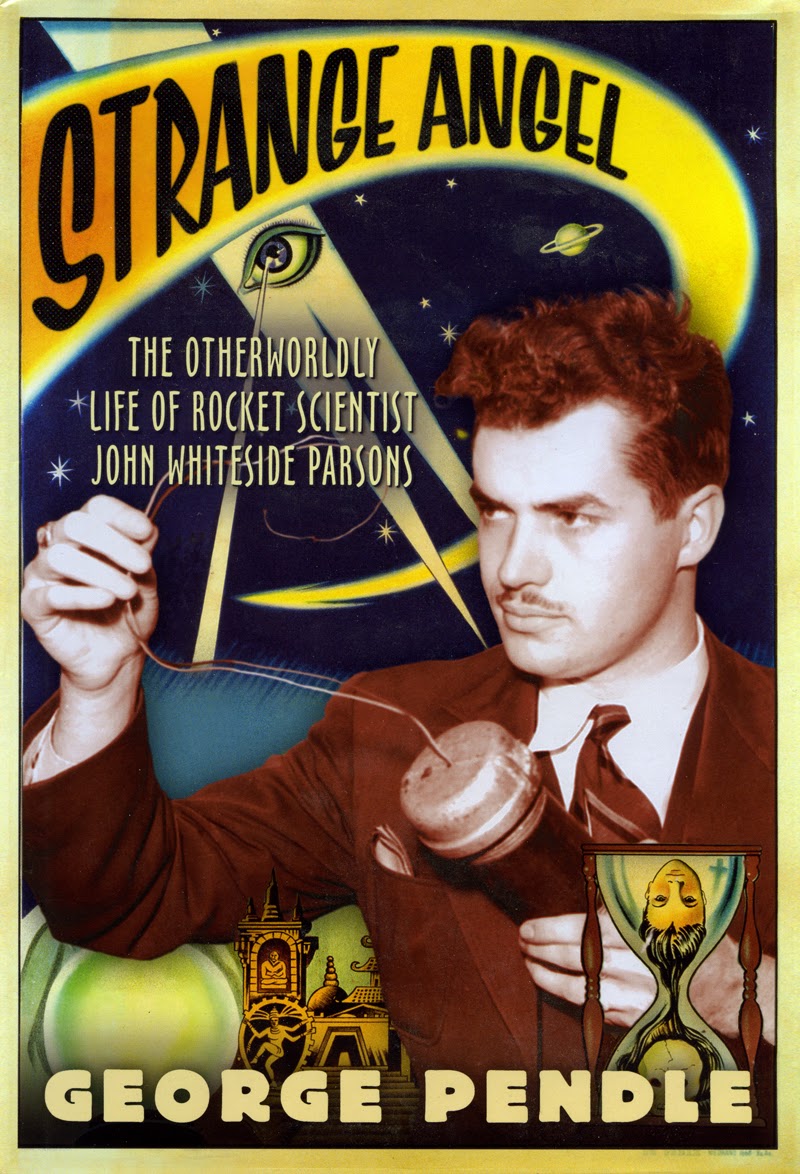 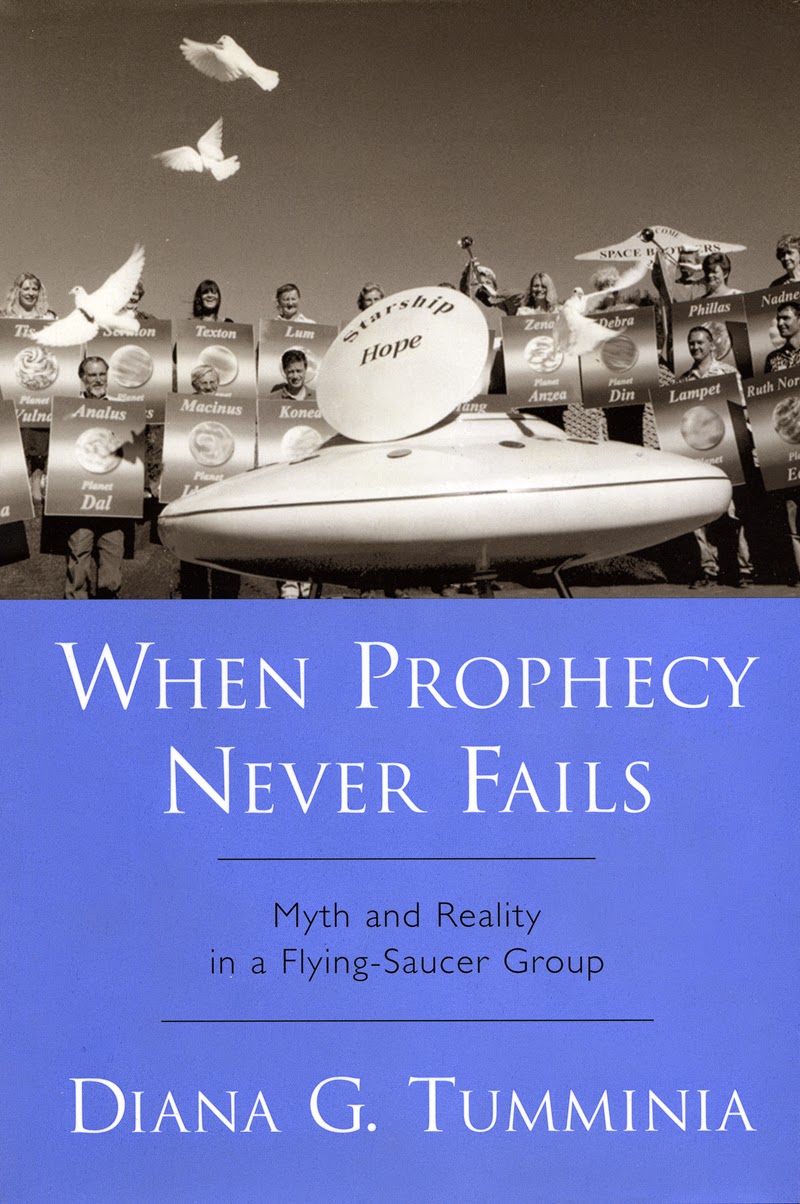 While perusing the shelves at AFU I become acutely aware of the heretic nature of our subjects and data. How distant we are from mainstream science and religion and the usual interests and hobbies of "normal" everyday people. Especially as we have the audacity to claim there are a vast array of phenomena out there that neither orthodox science nor religion understand or care to investigate. Those cultural and intellectual heretics who enter this world of Forbidden Science often becomes an embarrassment to mainstream society as they open a crack in the wall of materialist/reductionist science and philosophy. Serious ufologists, Forteans and paranormal investigators are the gnostics, cathars and hermeticists of today. Representatives of the third intellectual force in Western history. Allen Hynek understood this well when he named his group of investigators the Invisible College. An interesting comment on this was presented by Jacques Vallee in his foreword to the reprint of his 1975 book The Invisible College. You can read his new foreword in the 2014 edition at the Amazon site.
Posted by Håkan Blomqvist at Thursday, October 16, 2014