About five years ago documentary filmmakerns Michael Cavanagh and Kerstin Übelacker watched a UFO documentary on Discovery Channel where several ufologists were interviewed. Most of them spoke confidently of extraterrestrials as the solution to the UFO enigma. One of the ufologists, Clas Svahn of UFO-Sweden, simply said he didn´t have the answer. This so impressed Michael and Kerstin that they decided to contact Clas Svahn to make a documentary on UFOs and UFO-Sweden. Beginning in the Autumn of 2010 the team has followed the activities of the organization and especially the expeditions to lake Nammajaure to find a Ghost Rocket that was observered to have landed and sank in the lake in 1980. 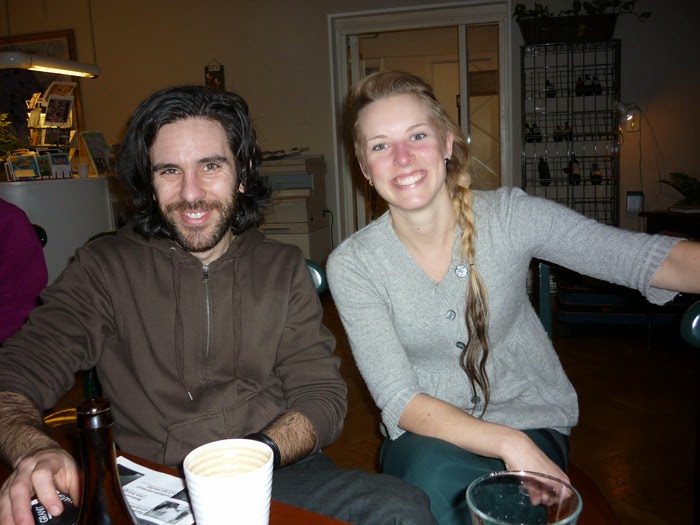 Michael Cavanagh and Kerstin Übelacker at the UFO-Sweden board meeting in Ängelholm January 21, 2011

Michael and Kerstin have been our constant companions for almost five years. And this year the result of their hard work has come to an end with the release of the documentary Ghost Rockets. Already the film has been shown in Gothenburg, Malmö and Stockholm and yesterday it was showtime here at Norrköping. Later this year the documentary will be shown on Swedish television. On Thursday we had a press conference at AFU for the local media. The media coverage was good and you can find links to articles, radio and TV on Clas Svahn´s blog. 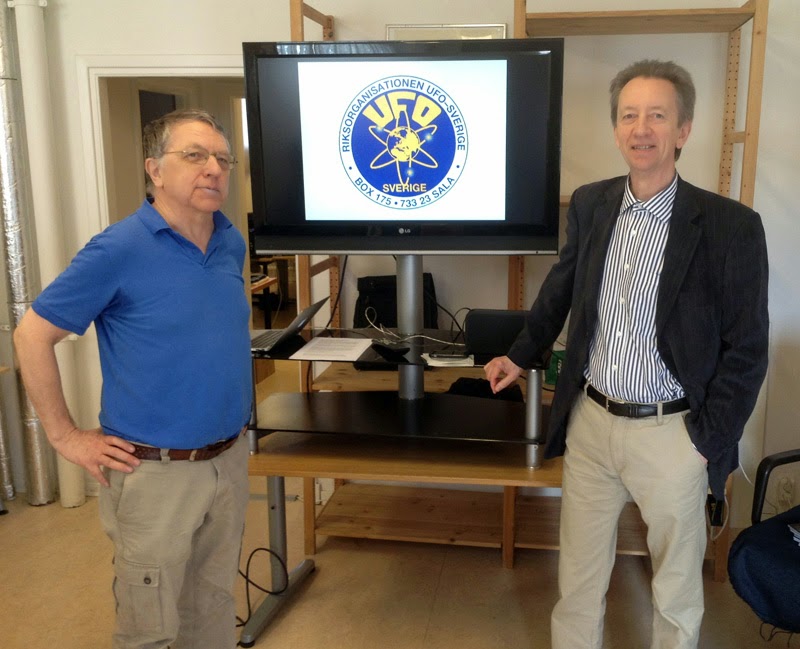 Me and AFU collegue Anders Liljegren preparing for the press conference 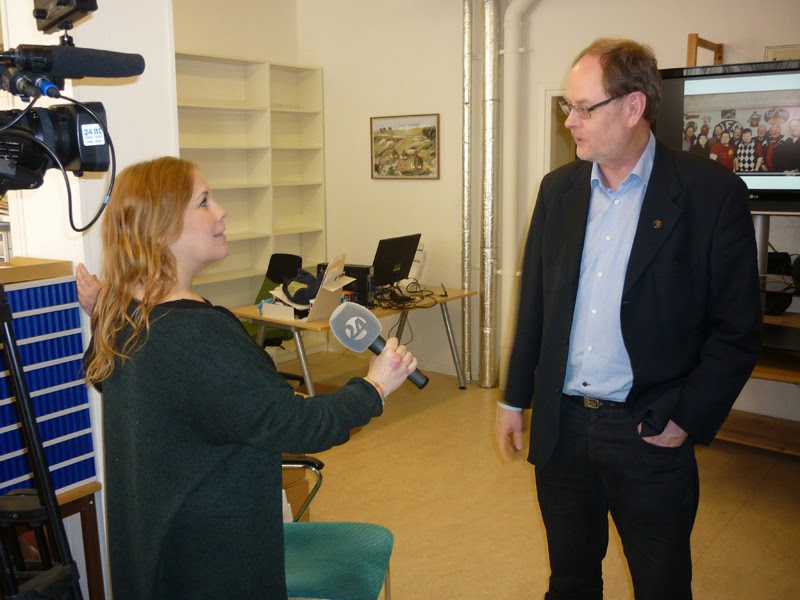 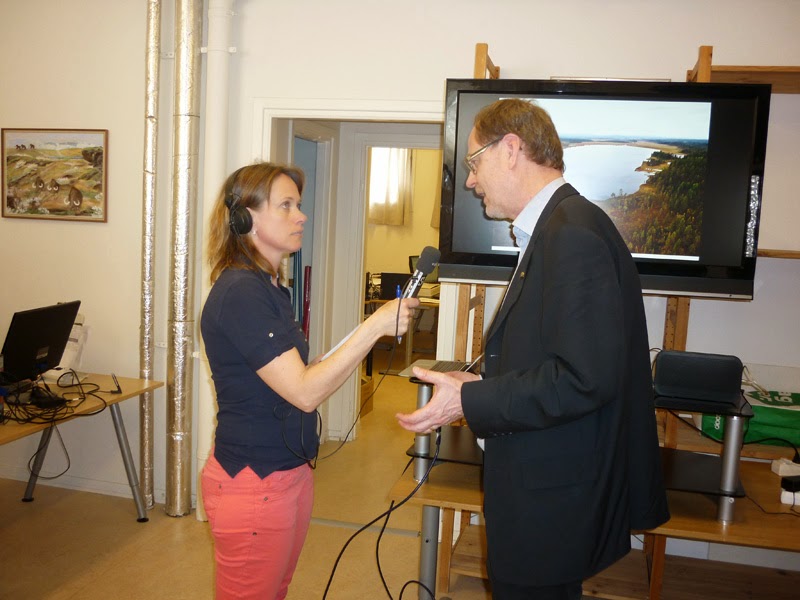 Yesterday around 130 persons turned up to watch Ghost Rockets at Cnema in Norrköping. Clas Svahn gave an excellent introduction to the film and the mystery of the Ghost Rockets. This was the first time I watched the documentary and I was tremendously impressed by the quality and feel good sense in the film. People with no knowledge of UFOs will get a good and serious presentation of the real enigma of the Ghost Rockets together with a very likeable and empathetic view of UFO-Sweden and its members. 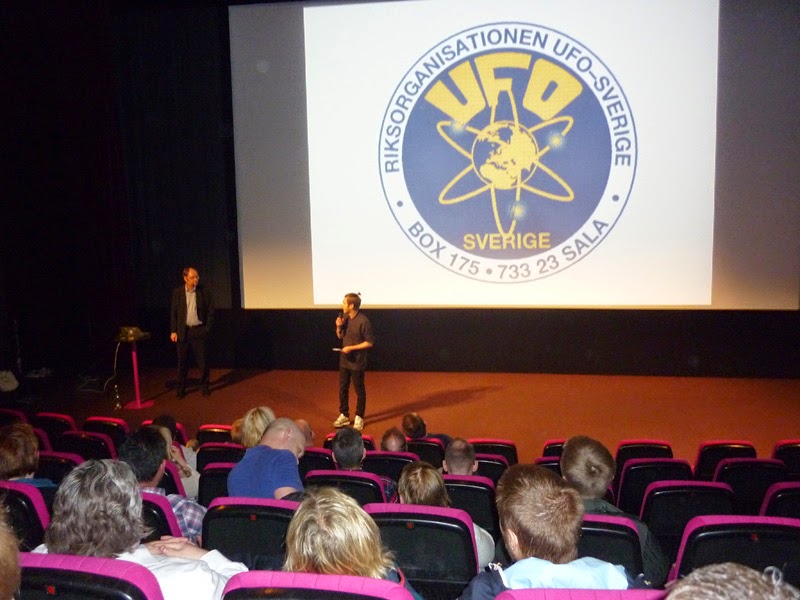 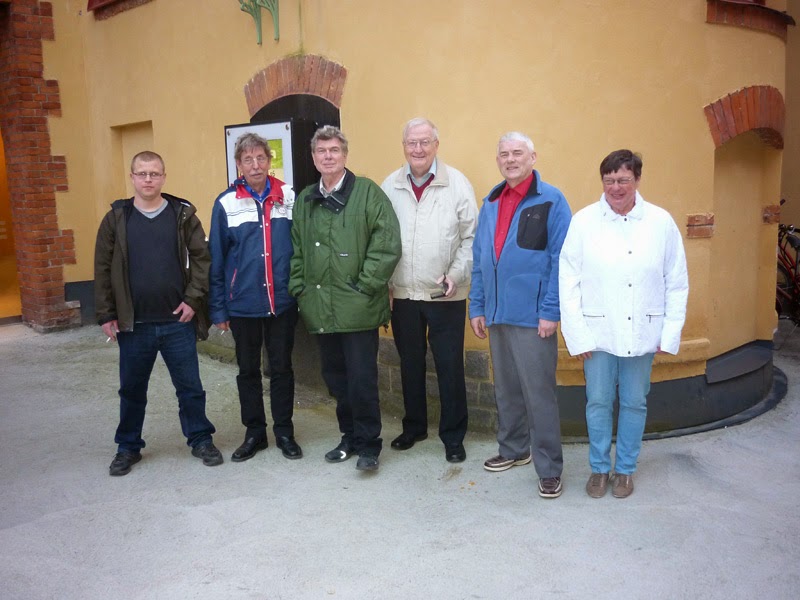 Some of the UFO-Sweden gang after the show

Ghost Rockets have already been sold to Norway, Denmark, Finland and Canada and I sincerely hope that people in many more countries will have a chance to watch this unique documentary. My salute to Kerstin Übelacker and Michael Cavanagh for an excellent job.

The future of phenomena investigation

When I began my active involvement in ufology in 1970 field investigation was a relatively simple pursuit. It was not too difficult to ascertain the usual misinterpretations of planets, stars, aircraft, balloons and the common psychological mistakes made by UFO witnesses. Today the situation is radically different. The digital revolution has made assessment of photos and films exceedingly complicated. Internet is teeming with obvious fakes or highly dubious reports.

The field investigator must also be aware of all the new and large and small air vehicles, RPV, drones and model aircraft moving in our airspace. Not to mention Chinese lanterns and possibly black project aircraft of various design. And then we have the cultists, the mythmakers, the more or less credible whistle blowers and the political extremists using the “UFO myth” to attract members to extreme right-wing or neo-nazi groups. 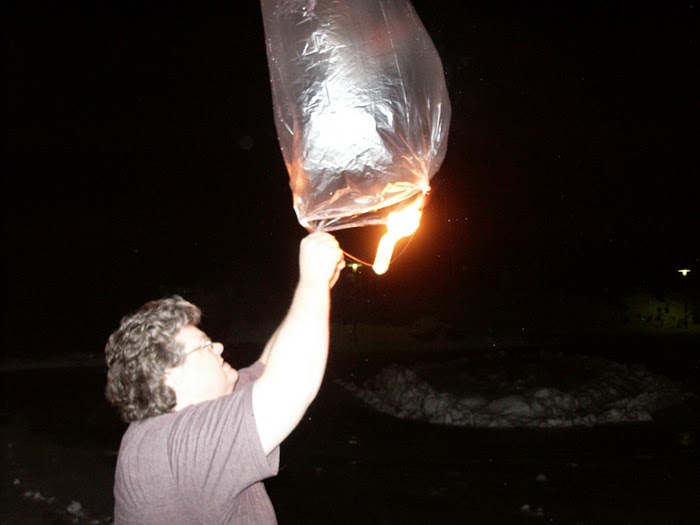 To this situation must also be added the often debated decline in ordinary or classic UFO reports. Today daylight discs and close encounters cases are exceedingly rare. The cause of this change in reported observations is intriguing. Personally I have advanced the theory (esoteric intervention theory) that some of the first wave of UFO reports and physical contact cases in the 1940s and 50s was a cultural test made by a benevolent group of aliens from somewhere – earth-based or extraterrestrial. 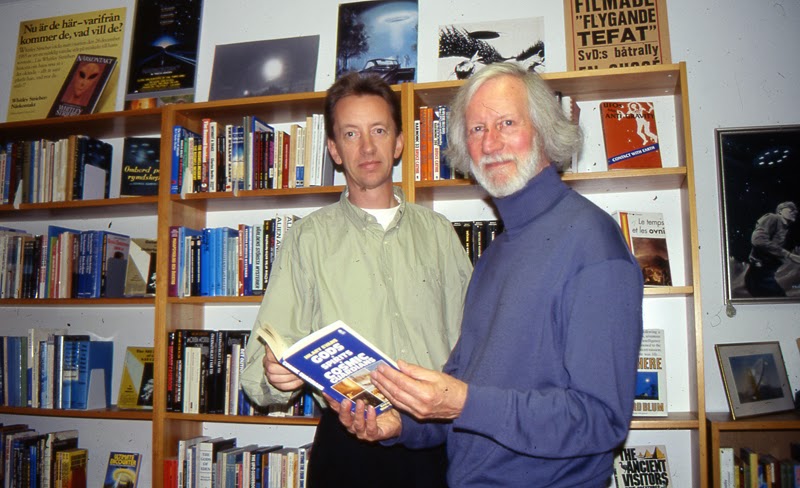 Me and Hilary Evans during his visit to AFU in 1996 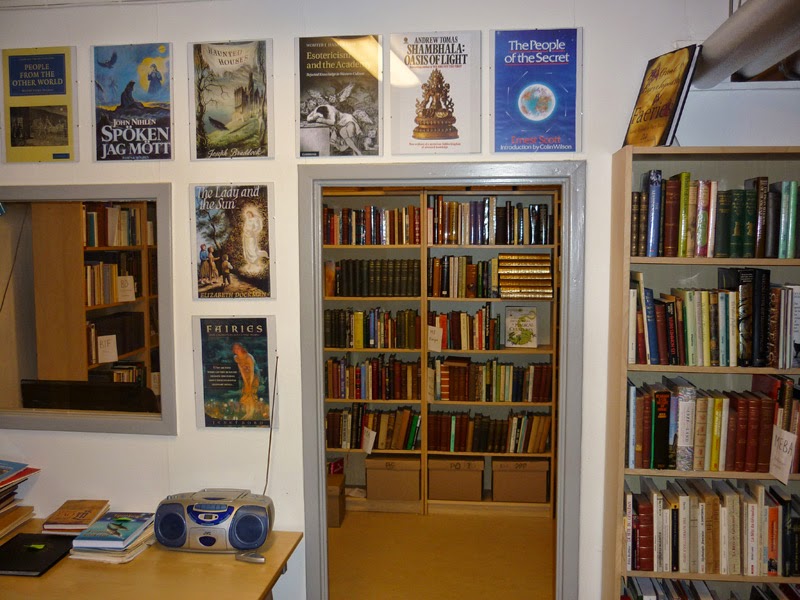 The Evans library at AFU

UFO-Sweden and AFU are neutral and open minded when it comes to theories and paradigms. But no field investigator can study all these phenomena for years without forming some type of worldview to account for the high strangeness of the cases he or she is documenting. Readers of my blog are aware of that I regard the more scholarly presentations of the Esoteric Tradition as the most interesting and intellectually tenable paradigm, the best working hypotheses I have encountered.

Here are some esoteric sources and quotes that could be of interest to field investigators and the future of phenomena investigation. The writings of Jacques Vallee and John Keel made mainstream ufologists aware of the close resemblance between some UFO entities and the devas, nature spirits and elementals described in folklore and religion. According to the esoteric tradition devas and nature spirits are a parallell evolution to man living at different levels of the multiverse. In the coming centuries we will become more conscious of each others existence and be able to co-operate. The reappearance of The Fairy Investigation Society is an interesting cultural phenomenon pointing in this direction.
"The etheric levels of the plane will be full of an increased activity, and slowly but surely, as the decades slip away, man will become conscious of these levels, and aware of their inhabitants... Men in their etheric bodies will be noted, and communicated with, and the devas and elementals of the ethers will be studied and recognized." (Alice Bailey, A Treatise On Cosmic fire, p. 474.)
A Swedish entity encounter that I would interpret as nature spirits is the Helge Eriksson case of 1931. 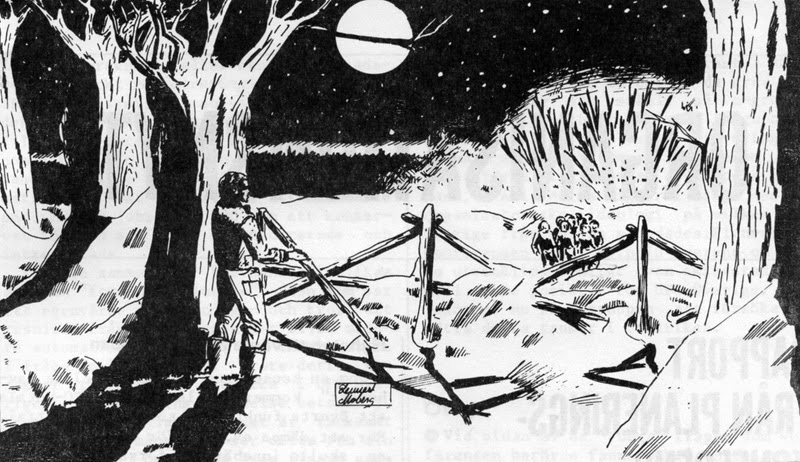 The entities encountered by Helge Eriksson in 1931

Elementals was a favourite term of John Keel who interpreted most entity encounters as elementals. But Keel never studied the scholarly Esoteric Tradition as far as I know. Elementals are simply mind creations, made consciously by those who know how and unconsciously by religious devotees of all faiths. A form of multiverse robots - good, neutral or evil.
"Later will come the power to materialize thought-forms. People will come into incarnation that will have the ability temporarily to create and vitalize these thought-forms, and so enable the general public to see them."
(Alice Bailey, A Treatise of White Magic, p. 181-182).
I have personally investigated one entity close encounter that I would interpret as elementals, the Väggarö case of October 1965. 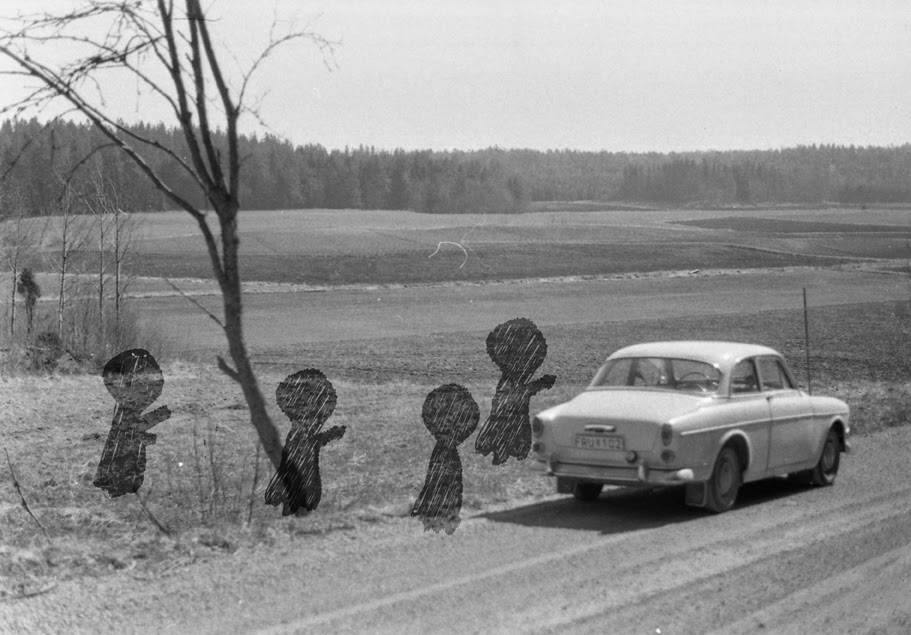 An interesting example of thought-creation is given in Conjuring Up Philip. An Adventure In Psychokinesis, by Iris M. Owen and Margaret Sparrow. A group of parapsychologists in Canada decided to try to create a fantasy entity named Philip. George and Iris Owen were well known parapsychologists interested in poltergeist phenomena. The group succeeded in creating an entity they could communicate with and who caused several paranormal phenomena. The famous traveller and author Alexandra David-Neel gives a very vivid description of how she created a fantasy monk, a tulpa. This mind-creature became so physical that a visitor took it for a live lama. 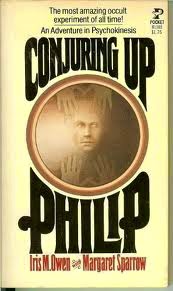 A very fascinating and promising prophecy in esoteric literature is that within a hundred years we will be able to photograph and film phenomena of the etheric world and other parts of the multiverse. If true that would be the definite end of materialism as a mainstream academic worldview. To field investigators of UFO and paranormal phenomena it would open up a totally new world of entities and phenomena. Until that day the data and claims made in the Esoteric Tradition can be used as an alternative working hypothesis.