Anomalist Books continue to publish excellent titles, both new and classics, on UFOs, Forteana and the paranormal. As I have often referred to John Keel in various blog entries I was especially pleased to find new editions of his seminal works in the book list. This week I recieved my copy of the 1957 classic Jadoo, a travel diary of his adventures in the Orient. When the book first appeared Keel promoted it by performing a snake-charming act in a pet store window in New York City. As you immerse yourself in this well written and entertaining book it becomes obvious why chapter one begins with: "I am a professional cliff-hanger".

This new edition has additional material not found in the 1957 version. A few typewritten pages of manuscript found in John Keel´s apartment after his death and edited out of the old edition. It is the story of Keel´s German girlfriend Lite, called Ingrid in the book, whom he met while working for the American Forces Network in Frankfurt, Germany in the beginning of the 1950s. It is a heartbreaking story of love found and lost, partly because of lack of money and also a young man´s dream of breaking free of a restricted life to look for adventure and mystery. "I wanted to see Timbuctu and Baghdad, not Stuttgart and Mannheim. I wanted to walk among the ruins of temples, not factories. I wanted to dig into the dark secrets of Egypt and India and write about jadoo instead of the North Atlantic Treaty Organization." 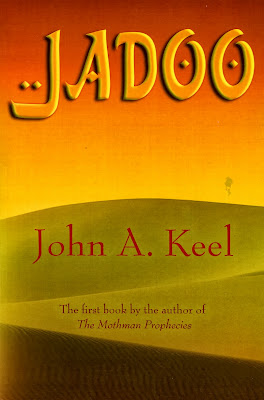 Later in life, after his involvement in the UFO enigma, Keel referred to Jadoo in Operation Trojan Horse: "Previous to all this I was a typical hard-boiled skeptic. I sneered at the occult. I had once published a book, Jadoo, which denigrated the mystical legends of the Orient." But this is not quite true. Although it is written in typical Keel fashion with a critical and humourous spirit there are several experiences and phenomena in the book which he can´t explain and truly puzzles the young adventurer. He hear the sound of and get a short glimpse of what could be the abominable snowman. A mystical lama give Keel a demonstration of levitation while other lamas move chairs bo mental power and prove their ability of remote viewing by telling of a fire going on in a distant village. When Keel checked later, there had been a fire in the village. Instead of "denigrating" these claims he writes: "There was no explanation for these things. I thought I knew all the tricks of the phony western mediums, but this demonstration stymied me." Although a hard-boiled skeptic, Keel does not appear as the typical debunker in Jadoo, rather as the inquisitive romantic adventurer. And I love his humourous comments, like this one: "One lama told me the way to vanish into thin air is to make the mind a complete blank. (If this is true, then I know several people who should have disappeared long ago.)" If you haven´t read Jadoo you have an evening of mystery and adventure waiting. And this world will probably get one more John Keel fan.

This week has also seen some additions to my collection of esoterica. Scholarly volumes on what is in the academic world named Western Esotericism is appearing at a increasing pace. An interesting cultural change regarding this earlier taboo subject which I have commented upon in an earlier blog entry. Introduction Series to Western Esotericism is a new project to serve as basic handbooks for students and scholars. There are seven volumes projected and the first, The Academic Study of Western Esotericism, has just been published, written by Dr. Tim Rudbøg, who holds an MA research degree in History of Religion with Philosophy at the University of Copenhagen. The cover illustration of the first volume is a real wet blanket but the content is a good introduction to the subject. 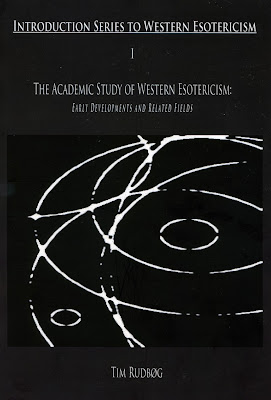 The academic term Western Esotericism is in my view something of a misnomer as a basic idea in esotericism is that it represents an ancient and global tradition. This problem is noted by Rudbøg who in his introduction asks whether Western "should or will be considered valid in the future". An esotericist would probably answer that the teaching is universal, the "knowledge of reality" or worldview presented by the elder brothers, the planetary hierarchy, the inner government of the world who since time immemorial have been the custodians of the Ancient Wisdom.

One chapter in the book is devoted to the Traditionalist Perspective on Esotericism. Traditionalism, or Perennialism is a radical conservative offshoot of the esoteric tradition and is usually critical of modernism, humanism and empiricism. Rudbøg notice that many of its adherents are academics, which has had an influence on the academic study of religion, philosophy, art and esotericism. But he does not mention whether there also are adherents of classic esotericism within the academic community. Perhaps that is still one of the taboos to be overcome. An esotericist can of course be just as eminent a scholar of esotericism as a buddhist studying Buddhism. 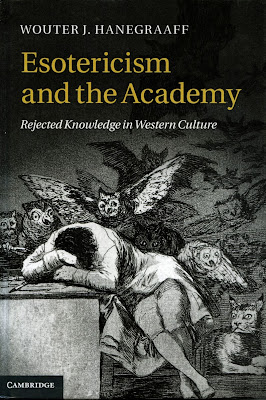 As ufologist and student of the esoteric tradition I have now and then been asked of my own view regarding esotericism. In an earlier blog I tried to give a position statement on this issue. Basically I consider the esoteric tradition the most interesting and intellectually best formulated alternative hypothesis or paradigm when trying to explain many UFO and paranormal phenomena, including the enigma of consciousness. Esotericism in my definition is foremost the writings of H.P. Blavatsky, Alice Bailey and Henry T. Laurency. The only tenable position though, as an intellectual humanist, is to regard the Ancient Wisdom as a working hypothesis. "Belief is the enemy", as John Keel often stated. He was not an esotericist but definitely one of the most fascinating reductionist/materialist paradigm crackers of our time.
Posted by Håkan Blomqvist at Tuesday, October 01, 2013