What happened to Ante Jonsson?

At almost every lecture on AFU and the UFO enigma one or two persons from the audience comes up after the lecture asking for a private talk. Usually they relate a personal UFO experience and very often they wish to remain anonymous, sometimes not even disclosing their name, address or phone number. This of course makes it impossible to initiate any follow-up investigation. An exceedingly frustrating situation experienced by several of my field investigator collegues in UFO-Sweden. Especially since many of the stories we hear are very interesting and intriguing. There must be hundreds of unrecorded close encounter cases merely in Sweden.

This culture of silence regarding UFO experiences probably have several causes. The most obvious is fear of what friends and relatives will say, fear of losing employment or fear of media exposure. And here ufologists face a difficult ethical dilemma. What shall we recommend to the witnesses regarding anonymity? Although we as researchers advocate openness as much as possible, publishing personal data can actually create complicated and negative situations for the witness. One close encounter witness told me that if she had known how the media exposure would affect her life she had never given out her name. Field investigators must be sensitive to this problem and honestly discuss the issue before publishing personal data. This ethical dilemma becomes a central issue when dealing with humanoid and contact experiences. Here I narrate a classic Swedish case where the witness was very much media exposed but handled the situation in spite of many difficulties.

On the night of February 3, 1984, Mr. Ante Jonsson is travelling by car from Ingelstad to his home in Tingsryd, Småland. The time is around 1 A.M. and 40 year old Ante is driving carefully because of the snow and icy road. After passing the crossroad to Uråsa Ante notice a small figure on the left side of the road and over a meadow a large black object is hovering in the air. Astonished by the sight Ante stops the car but the small figure is gone. "My first thought was that I have to get a picture of this object. I hurried home to get my camera."

About 1.30 A.M. Ante is back at the site but the object is gone. Disappointed he decides to turn the car around and go home. Then suddenly the object appears again hovering right in front of the car. Ante hit the brakes but the car skids on the icy road and comes to a stop with the headlights shining on the object. He tries to escape the situation but the car gets stuck in the snow. "When I opened the car door a creature grabbed me and almost lifted me out. I just screamed." He tries to run away but is caught and dragged towards the object. The creature is not more than 1 meter in height, wearing some form of dress hiding the face. Ante´s last memory is noticing a lorry passing by. Then everything is blank. "When I woke up I was sitting in my car, cold and wet with a pricking feeling in my hands. And a vague memory of talking to somebody whom I later found out was the police. My next memory is waking up at Sankt Sigfrids hospital in Växjö." 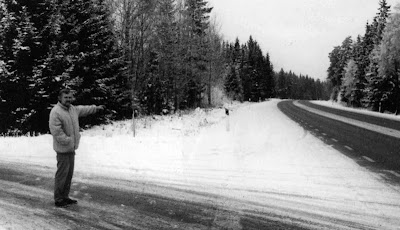 Ante Jonsson at the observation site in 1984

At 1.50 A.M. there is a phone call to the police station in Växjö. A man calling himself Bengt Johanssson claims he just passed Uråsa airfield and noticed a car parked across the road with the headlights turned off. He also observed a person outside the car and "over the car a large black object hovered", as stated in the police records. Bengt Johansson promised to wait for a police patrol to arrive at the site but when Roland Karlsson and Thorsten Persson from the Växsjö police station arrive Bengt Johansson is nowhere to be seen. Instead they find Ante Jonsson sitting in his Saab 99. The car lights are turned off and the car door open. 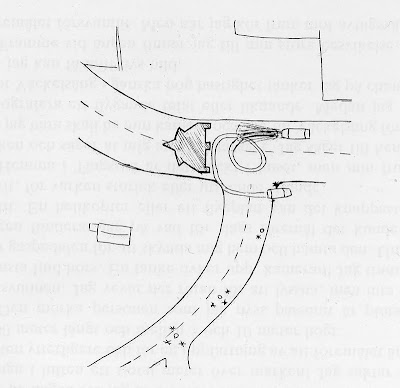 Ante Jonsson appears very scared and confused. His is holding the steering wheel in a tight grip and the muscles in his hands and arms are abnormally tense. He is shaking violently and when the policemen try to converse with Ante he appears very confused and can´t remember how he ended up at the site. They bring Ante to Växsjö hospital. Here the physician notice that Ante is in deep shock, hyperventilating and his fingers are curved in cramp. He is injected with valium, with little effect. Then he enters a deep sleep. Later he is taken to the psychiatric clinic at Sankt Sigfrids hospital where he recovers and is sent home after a few days.

Field investigators from UFO-Sweden tried to locate Mr. Bengt Johansson from Karlskrona. But in spite of thorough investigation no such person could be traced. There were twelve Bengt Johansson i Karlskrona but no one claimed to be the witness. The man who observered the black object over Ante´s car could never be found. An extremley frustrating situation for the field investigators as this man could have corroborated a very intriguing UFO experience.


Ante Jonsson at the observation site in 2007

The story of Ante did not end with his first encounter. About a month after the traumatic abduction experience Ante enters a period of intense "dreams" and visions where he is contacted by a variety of entities, mostly human in appearance. The take him to different planets and predict coming nuclear wars. Ante´s contact experiences continue for many years but he is not sure whether they are reality or dreams. He enters a different state of consciousness. "It can happen anytime. In the morning, during the day, evening or night. But mostly during the evening. It begins with a grovelling feeling all over the body. Something is moving inside. I don´t know how to explain this. There is something moving in the head and body. And it is always the same. After two or three days something happens."

Ante Jonsson has written hundreds of pages decribing his contacts. In 1989 his story was published in a, not very serious, book written together with Sune Hjorth, Fantastiska resor med UFO (Fantastic trips in UFOs). There have been many articles and interviews with Ante in magazines and newspapers. He has never been afraid of publicity in spite of his fantastic claims and has also lectured to various organizations. 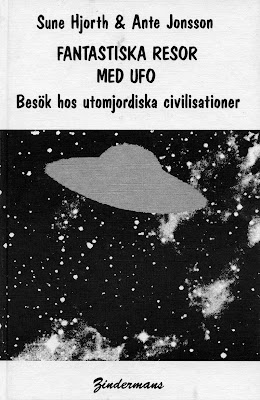 So what really happened to Ante Jonsson? His first observation is quite well documented. To determine the degree of reality of the later contact experiences is difficult but probably they can be interpreted as inner, subjective visions. This scenario is of often observered with regard to contactees. The first encounter is very physical and later experiences mostly visionary. But what was the object and humanoid that triggered this change in consciousness?