Ray Palmer - the man from Mars

John Keel dubbed him "The man who invented flying saucers" in Fortean Times 1983, orthodox aficionados of science fiction termed him a disaster who destroyed their genre and to the scientifically inclined ufologists of the 1950s and 60s he was a talespinner who championed impossible theories like The Shaver Mystery, a hollow Earth and the complicated worldview of the channeled "Bible" Oahspe. Anyone delving into the underground world of ufology will sooner or later encounter the books, magazines and theories of Raymond (Ray) Palmer (1910-1977). For some unknown reason this well known figure in ufological history is only mentioned in a footnote in David Michael Jacobs classic The UFO Controversy in America. This odd omission is noted by author and scholar Fred Nadis is his recently published Palmer biography: The Man From Mars. Ray Palmer´s Amazing Pulp Journey. 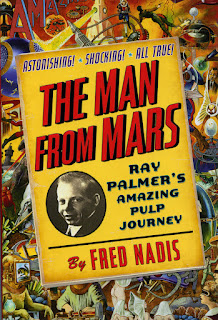 Ray Palmer instantly became an avid science fiction fan when he found the first issue of the pulp magazine Amazing Stories at the newsstand in Milwaukee, Wisconsin in 1926. A severe accident had made him a cripple and hunchback when only seven years old and this handicap made him a voracious reader of everything from archeology to astronomy and mythology. But it was science fiction that was his first love and he started writing pulp stories in his bedroom. Hardly could he imagine that in twelve years he would be the editor of Amazing Stories. According to John Keel this magazine was regarded as "garbage" by hardcore sci-fi fans. But by the end of 1945 this "garbage" was selling 250,000 copies per month. And all because Palmer had discovered a Pennsylvania welder, Richard Shaver, who claimed to be in contact with underground races, the evil Deros and the kind Teros. 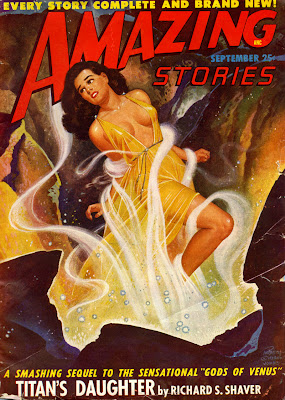 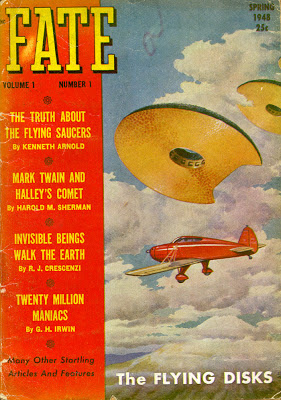 As editor of Fate Palmer hired Kenneth Arnold to investigate the controversial Maury Island observation. The affair resulted in the tragic death of two Air Force Intelligence officers and strange rumours of Men-in-black and conspiracies. Palmer associated this with his involvement with the Shaver mystery and that this was confirmed by a famous intelligence agent. In his article The Hidden World, Palmer wrote: "Why, I had to ask myself, would a military secret service agency concern itself with the hair-brained fiction story that the earth was honey-combed with caves in which lived a degenerate race of people calles dero, who possesed marvelous machines with which they caused unending trouble to surface man? When at last one of the the world´s  top secret service men, the spy to whom American owes most during Wold Was II personally paid me a visit and said flatly that there was "more truth than I knew" in Shaver´s story, the "hidden world" came into full prominence". (Flying Saucers, no. 17, November 1960, p. 35-36). 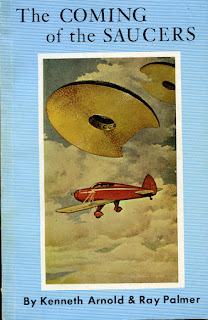 It is difficult to ascertain how much Palmer really believed in the Shaver stories. Palmer was a combination of  trickster, iconoclast and spiritual seeker. Richard Shaver was an outspoken atheist and materialist. Ghosts and spiritual experiences was just technological tricks played by the Deros on unsuspecting victims using rays that stimulated the brain. This was contrary to Palmer´s own spiritualist beliefs. During most of his life he advocated the teachings of the obscure channeled "Bible" Oahspe. Fred Nadis mentions that Ray and his wife Marjorie used to read it to each other at night and discussed it while doing dishes in their home in Evanston. Palmer eventually also published his own edition of Oahspe.

In 1953 Palmer sold his share in Fate and started the rival magazine Mystic, later to be named Search. Here he could combine his interests in Shaver, flying saucers and spiritualism. In Mystic, August 1954, one of the most fascinating (in my view) physical contactee stories ever was published by Los Angeles journalist Paul M. Vest: Venusians walk our streets! In 1957 Palmer launched the more specialized magazine Flying Saucers and in 1966 began Ray Palmer´s Forum. In his first editorial i Forum he wrote "conformity is the enemy of all thinking". And perhaps that was one of his real and deep ambitions, although he used somewhat far-out ideas to accomplish his aim. He also theorized this was one of the reasons for the coming of the saucers. In an interrview in Caveat Emptor, no. 1, Fall 1971 he stated: "Now if there is a power somewhere which is interested in the balance of this planet, the flying saucers would be an excellent way to - just to make us think. So to prove to us exactly what they were would make us stop thinking again." This is a much more optimistic UFO theory than manipulation by evil Deros. 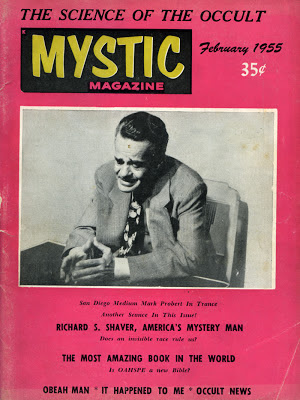 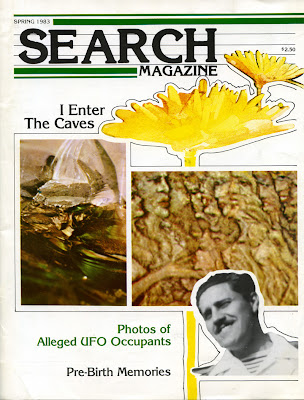 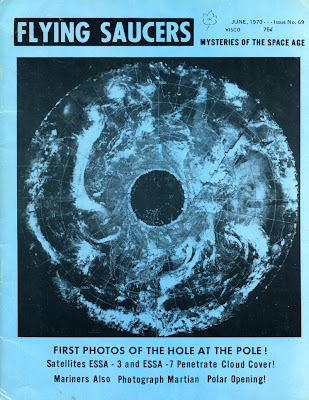 Ray Palmer was in many ways an cultural outsider, the Man From Mars, as he used to call himself. Both physically different and with ideas that certainly didn´t cater to the mainstream, not even to the ufological community. But he was a gentle soul who supported several worthy causes, among them giving help to poor native Americans as told by biographer Fred Nadis. When Palmer died in 1977 James W. Moseley wrote in  his obituary: "It is with genuine sadness that we announce the recent death of UFO pioneer Ray Palmer of Amherst, Wisconsin. Only those of us who had the privilege of meeting him in person knew what a warm, wonderful person Ray really was. He didn´t really expect anyone to agree with all his wild theories; in fact, at his lecture at the recent Fate Convention in Chicago, he kept telling his audience, to their amusement, that they needn´t believe everything they were hearing.. What Ray Palmer did was make us think in new, weird, wild directions; and for that he deserves to be remembered as a master of his trade..." 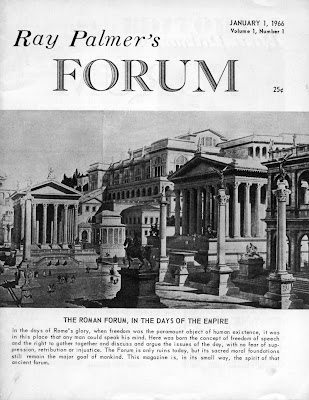