New Zealand airline pilot and ufologist Bruce Cathie died June 2, 2013. Following a UFO observation in Manukau Harbour, Auckland 1952 he started his own investigations which resulted in several books. In titles like Harmonic 33 (1968), Harmonic 695 (1971) and Harmonic 288 (1977) Cathie claimed to have discovered a grid-like pattern on the Earth used by flying saucers for power and navigation and that this grid could also be used for predicting the detonation of atomic bombs. 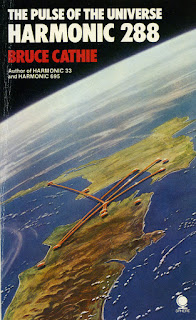 Very early in his research Bruce Cathie became convinced that there was a powerful international elite behind the UFO phenomenon. He claimed that representatives of this elite approached him several times offering large sums of money if he would stop his investigations. "As I dug in closer to the truth of the UFOs and the power sources which they use, I was twice approached by a "middleman" who was interested only in finding whether or not I would stop my research for a price. When he found that I was prepared to go on with my research and to publish at all costs, I was warned that unspecified "strange things" would happen to me if I persisted... A little later I was again approached, offered a position working with a small band of scientists with the hint of a very healthy salary". (Harmonic 695, p 91).

Cathie also claimed several classic MIB experiences. He described these in the chapter People we would like to know more about. These experiences convinced him that we have aliens among us and that their presence is known to some scientists. "I have an uneasy feeling that the world is being slowly and surreptitiously taken over by an all-powerful elite. I only hope if they succeed there purpose is one of eventual benevolence. " (Harmonic 288, p.xviii).

In the spring of 1992 Swedish ufologist Jan-Ove Sundberg visited and interviewed Bruce Cathie. Here are a few questions and answers from this interview:

Jan-Ove: Is it a sort of private group that are holding these things?
Bruce: It is a world group.
Jan-Ove: What kind of world group is it?
Bruce: A very powerful group backed by financiers and a comparably small group of scientists involved. Very, very powerful people. they are running the world. Oil companies are behind them.
Jan-Ove: Are they identifiable?
Bruce: I´ve had contact with people who are in the group. They tried to buy me off but I refused. You never get near the principals in the group.
Jan-Ove: Where are these people from? What country? Is there an inner circle?
Bruce: They are from all the major countries in the world... all the western world, Russia, Japan, America of course, England. There are even some here in New Zealand.
...
Jan-Ove: So you mean to say that actually scientists of the world are in cooperation with these people that are manning the flying saucers?
Bruce: Oh, yes.
Jan-Ove: How long has this been going on?
Bruce: Well, I´ve traced connections with the knowledge back to eleven hundred.
Jan-Ove: Eleven hundred!?
Bruce: And in modern times back to 1870.
...
Bruce: This whole thing is not in the control of the governments... These people are controlling the governments. If this technology does away with oil who are the people who will be most hit?
Jan-Ove: You say that these people they have the flying saucers. But originally the flying saucers couldn´t be from Earth, could they?
Bruce: If you knew the true history of Earth you would find that we are space people. We had space travel in the past... I know for a fact that this knowledge has been held by a group on Earth right through history. There has always been people who have known this stuff.

Bruce Cathie was a controversial man and there are several sites on the Internet presenting his views and discussing his theories. Cathies official website can be found here.
Posted by Håkan Blomqvist at Tuesday, June 04, 2013