The Edge of Reality (1975) by Allen Hynek och Jacques Vallee is one of the classics in UFO literature. Of special interest are the unusually open minded discussions, the brainstormning, between Hynek and Vallee. That both of these scientists were also ardent students of hermetical and esoteric traditions is obvious from their choice of and presentation of the various UFO theories. They have, from different perspectives, tried to find clues to the UFO enigma in old books on myth, folklore and the esoteric tradition. After many years of search Vallee concludes: "... there is no occult school that has a tradition of UFOs. They are just as baffled about it as the rationalists, and they tend to reject it with the same kind of skepticism; in other words, you find the same kind of skepticism in the high priests of the occult as you find in the high priests of science." (p. 145). 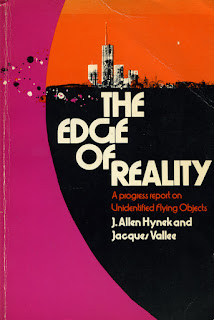 Vallee´s assertion is, in my estimation, basically correct. There is no mention of UFOs, at least in our time, in the esoteric tradition, only stories of Vimanas used in Atlantis. So when UFOs started appearing in large numbers after the end of World War II esotericists were as astonished and unprepared as the general public.   Meade Layne, founder of Borderland Sciences Research Associates in 1945, commented several times on this problem in The Coming of the Guardians, first published in 1950. His opinion was that the "near-hopeless inadequacy" of occult orders both in the east and west to cope with "facts of such immense importance" (the coming of the saucers) was appalling. This lack of knowledge of UFOs among esotericists became a challenge to the second director (1959-1985) of BSRA, Theosophist Riley Crabb. He declared his objective in The Journal of Borderland Research (Round Robin), vol. 17:1, Jan-Feb. 1961: "Meade Layne pointed out years ago how unprepared were the established Mystery Schools to explain the Flying Saucer phenomena. Your present director of BSRA knows from experience that this is true. My lecture work since 1954 has been an attempt to correlate Saucer sighting data with Mystery School teachings." (p.22) 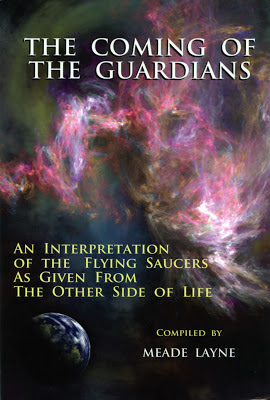 This was a real and difficult challenge to Riley Crabb as there is not much data to find in the classic Theosophical and esoteric literature. Crabb relied heavily on the claims of the unusual and interesting trance medium Mark Probert, whos Inner Circle members asserted that many UFOs were basically etheric. A most unusual member of the original BSRA associates was author and contactee Millen Cooke, whose article Son of the Sun, was remarkably prophetic as it was written in 1946.

Riley Crabb was very well versed in the esoteric tradition and quoted frequently from various Theosophical classics and the writings of Alice Bailey. But he still seems to not have noticed several almost prophetic assertions made by the Tibetan in the books of Alice Bailey. Pronouncements made before 1946 and which could be interpreted in a UFO context. I will here present some relevant quotes for consideration. They are all from The Externalisation of the Hierarchy, clothbound edition, 1981.

April 1935: "... the regenerative forces of Those extraplanetary Beings Who offer Their Help at this time." (p. 25)

September 1940: "There still remains one mode of intervention which is still more mysterious, illimitably more powerful, and definitely more difficult to evoke and subsequently to contact. This is the emergence, responce, or appearing of great Sons of God Who dwell in sources far removed from our planetary life altogether..." (p. 261)

These are just a few quotes. There are several more. Although the Tibetan often use typical oriental symbolic language these statements are clear indications that in the esoteric tradition before 1946 there is mention of an awaited extra-terrestrial intervention. Nothing is said of how this is to be accomplished and there is no  mention of craft or technology. It is also obvious from several quotes that even the Tibetan is not sure whether the "extraplanetary beings" will intervene. The Externalisation of the Hierarchy is to my knowledge the only esoteric source before 1946 that could be associated with the UFO enigma.

Finally I hope that the present leaders of Borderland Sciences Research Foundation (BSRF) take god care of their unique archive. According to a presentation on the blog Borderland Sciences News they are trying to preserve and arrange the archive which is now unaviable. Unfortunately they never answer e-mail as I have several times unsuccessfully tried to buy older issues of Round Robin as some issues are missing in AFU. I do hope that the UFO and esoteric community will have access to this archive in the future. 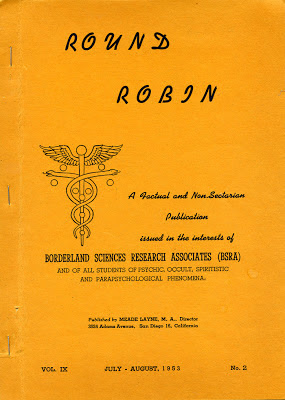