In the May/June 2013 issue of OVNI, Journal of the Phenomenon Research Association Margaret Fry tells of an extraordinary paranormal experience she had in 1970. Margaret Fry is a veteran investigator of UFO and paranormal phenomena and author of Who are they? (2004) and Link to the Stars (2009). 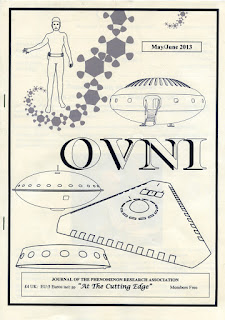 In the Spring of 1970 she went to visit her pen-friend Francisco Deulander in Barcelona. During the night Margaret woke up to see moonlight streaming into the room through the patio windows. "And there in the corner by a wash basin sat three little devils with horns. They formed a close circle and each had their heads bent, one arm linked and the other hand over their their three quarters closed large eyes". Margaret yells and as Francisco wake up their beds are rolling violently all over the room. Petrified she manages to jump to Franciscos bed. As the beds are zigzagging fast about the room Francisco tries to reach the switch and put the lights on. When he finally succeed the small devils vanish and the beds stop rolling.

Some year later Margaret contacted Francisco again to find out if that night in 1970 was a fact or dream. His response was "Don´t mention that again, please, please it was the most horrible, horrible experience of my life". Margaret has a vivid memory of this event and today she wonders what type of entities these "devils" actually were? "All I can say again is that it happened". 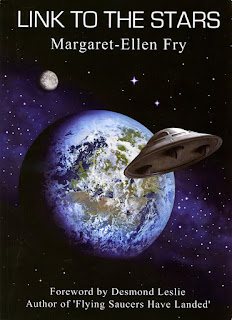 In the annals of UFO history there are many cases documented where their is observation of entities but no UFO. I have investigated a Swedish humanoid case with some similarities to Margaret´s experience. It involves the Swedish couple Sture and Turid Johansson. In 1976 Sture began his life as a trance medium travelling all over the world together with his wife. He became quite famous and celebreties like Shirley MacLaine and Dennis Weaver visited their home in Sweden. Sture also figures in the 1987 miniseries Out on a Limb, starring Shirley MacLaine, which I mentioned in an earlier blog entry. 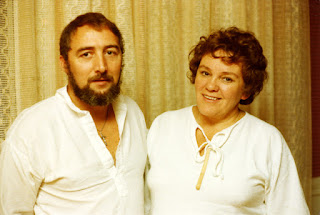 In the 1960s Sture and Turid were an ordinary working class couple, interested in UFOs and paranormal phenomena. On Friday, October 29, 1965 Turid received a inner (psychic) message that the couple should go to a place called Väggarö, south of Stockholm at 10 pm. Turid had once received a similar message by phone when an unknown voice broke in during a conversation with a lady friend and told her to go to Väggarö. But this time the voice also said, "be careful, there is a power struggle on Earth".

I interviewed Sture and Turid on October 27, 1973. Here are some excerpts from the tape:
"Sture: When we arrived at the place we were told to visit those entities were already there but we did not observe them until we had parked the car. It was not totally dark but twilight. We noticed them first over the field and then they came very close to the car, about 50 centimeter. We believe they were five or six, between 1,25-1,50 meter with large heads and shining eyes. The eyes were red, phosphorous. The entities didn´t walk but floated around in straight lines. I wished for all my life that another car would come but no one showed up. After some time the entities disappeared over the field and then it was like a saucer tried to land on the car. Our whole car shook and the radio screamed in the back seat. We took cover below the dashboard. 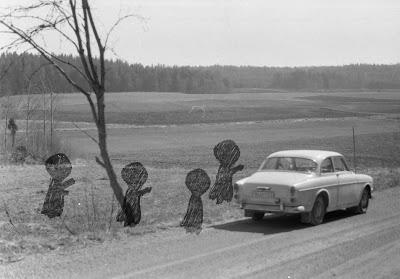 Väggarö, Sweden where the entities appeared 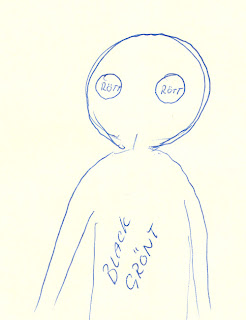 Håkan: For how long did the observation last?

Sture: Maybe five minutes but for me it felt like eternity.

Håkan: Did you see any ears or fingers?

Sture: Imagine yourself sitting in twilight gazing through the car window. Would you notice the type of ears or fingers the entities had when you are absolutely terrified. You just don´t do that. Then you have to be enormously cold-livered and I couldn´t act like that. But I am sure they had arms."

After this frightening experience Sture and Turid just sit in the car for a while before going home. But they arrive home in the early morning. Several hours are missing. They never wanted to know what eventually had happened during that missing time. 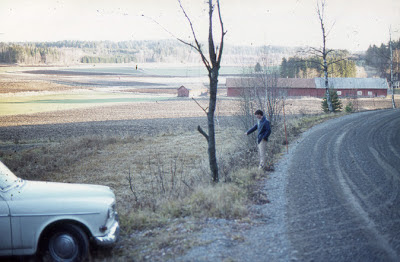 In Flying Saucer Review vol 22, no. 6 (1976) there is a case describing fifty small "frogmen" observered by witness Dominique Menuge on May 2, 1976. The site is close to the Franco-Belgian frontier. Between 9.00 and 9.30 the eyewitness is driving his car on the road from Matton to L´Etang du Banel. In the beam of the car lights he notice about fifty little men in a field. They had long arms with webbed hands and also webbed feet. Two big red eyes resembling highway traffic lights. Hight was about 1 meter 15 cm. They were simply standing in the field, doing nothing. The witness took fright and left the area as fast as he could. 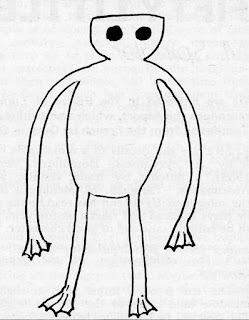 The entities as witnessed by Mr. Dominique Menuge

So what type of entities do we have here? Hardly aliens, unless they are robots. These creatures seem more like some form of elementals, described in folklore and by Theosophists like Geoffrey Hodson and Charles Leadbeater. According to esoteric tradition elementals are artificial creations formed consciously or unconsciously by human beings. An interesting example can be found in the classic Magic and Mystery in Tibet, by Alexandra David-Neel. But if the entities were elementals in the above cases, who sent these "aliens" to Sture and Turid?
Posted by Håkan Blomqvist at Thursday, June 13, 2013