Between 1979-1985 I corresponded with Riley Crabb, director of Borderland Sciences Research Foundation (BSRF) and editor of The Journal of Borderland Research 1959-1985. Riley became sort of a mentor in my research and study of UFOs, paranormal phenomena, Theosophy and the many offshoots of the esoteric tradition. We didn´t always agree but I valued his extensive knowledge and experience in many borderland areas and he sometimes printed my articles in his always interesting and controversial journal. I was very surprised when I learned that in 1986 there were only 450 subscribers worldwide to the BSRF journal. At that time we hade around 3000 subscribers to UFO-Aktuellt, published by UFO-Sweden.

There was one domain where Riley and I definitely clashed  in opinions, the writings and theories of  John Keel and Jacques Vallee. As a young ufologist in the 1970s I was deeply inspired by Keel and Vallee and could never really understand why Riley Crabb didn´t appreciate the merits of these authors and constantly criticized their writings in the BSRF journal. In a letter to me March 23, 1980 he writes: "John Keel has been discussed at length in the Journal in the past. He is a wilderness crying for a voice, and I´ve told him so. His writings, like those of Jacques Vallee, leave one hopeless. Their general conclusion is that the Flying Saucer phenomenon is beyond understanding; it´s the creation of malevolent forces here on the earth; there´s nothing we can do about it... There is no inspirational lift from Keel and Vallee, and there can´t be because the two men aren´t even metaphysical kindergartners, they are metaphysical illiterates." 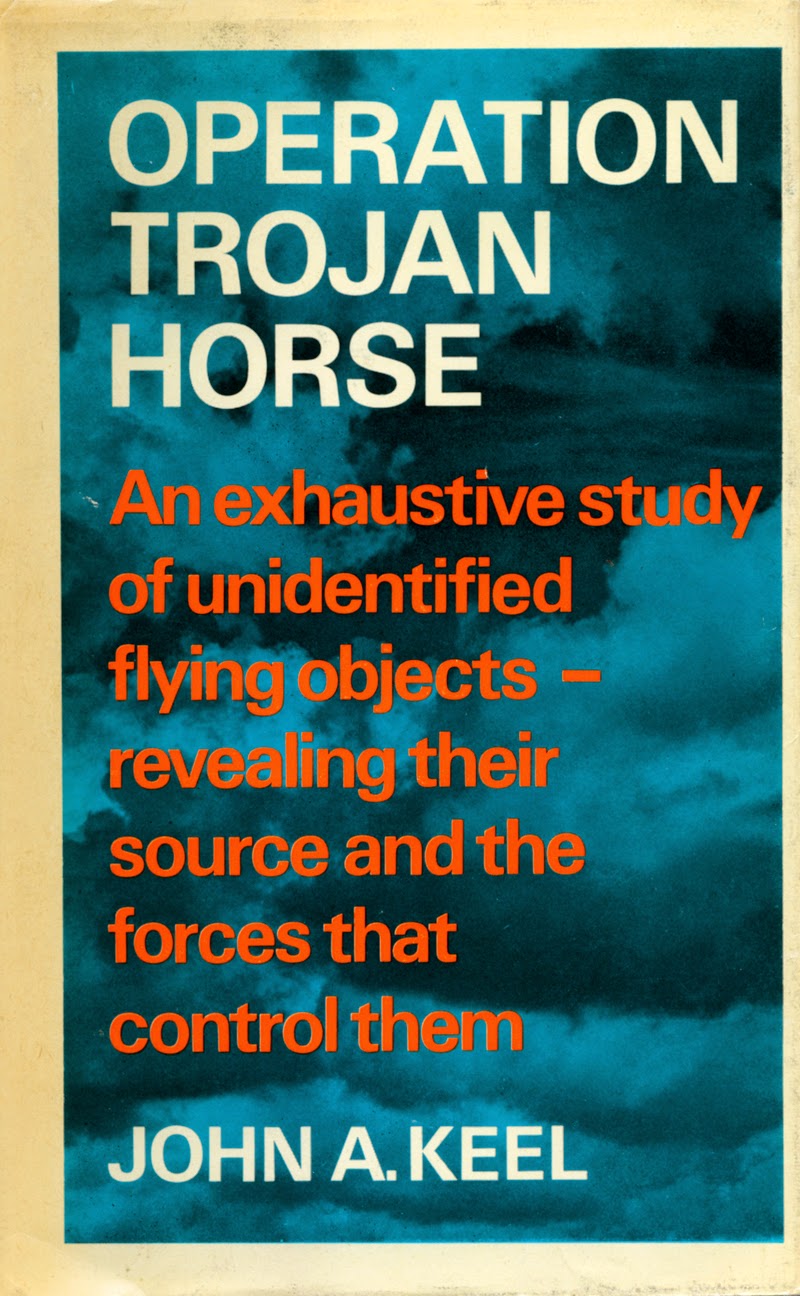 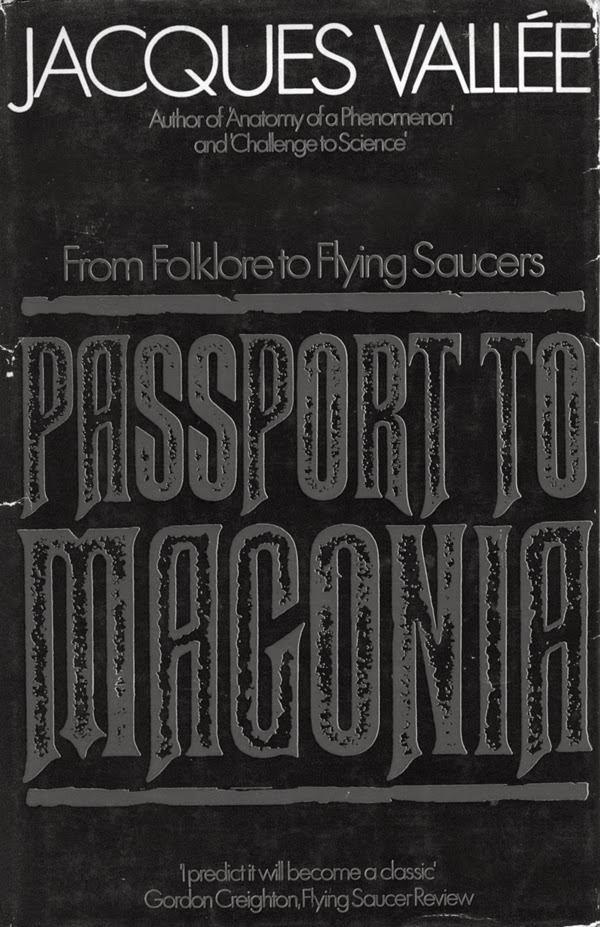 This in my view was a very onesided view of the groundbreaking research and writings of Keel and Vallee. How come that an esotericist like Riley Crabb couldn´t see that these authors expanded our horizon and looked beyond the materialist/reductionist interpretation of the UFO phenomenon? True, non of them were esotericists in the Theosophical tradition but at least Vallee was well versed in Hermeticism and other esoteric traditions. Neither was Keel the metaphysical illiterate portrayed by Crabb, something I mentioned in a recent blog. We never resolved this issue and after much discussion Riley Crabb gave up and wrote in a undated letter 1981: "But if you find comfort and inspiration in the writings and conclusions of these two men, by all means stay with them."

Riley Crabb became interested in borderland sciences when in 1934 he discovered the large library in the Theosophical Society in Minneapolis. Together with his wife Judy he lived thirteen years in Hawaii and was for three years president of the Honolulu Lodge of the Theosophical Society. During his stay in Hawaii he also studied pagan magic at first hand from native kahunas. Mr. and Mrs. Crabb moved to California in 1957 where Riley worked as a visual information specialist for the U.S. Navy´s Pacific Missile Range, Pt. Mugu, California. Having been a member of Meade Layne´s BSRA since 1951 he decided in 1959 to give up his job and took over as director of BSRA, later Borderland Sciences Research Foundation (BSRF). A position he held until 1985. 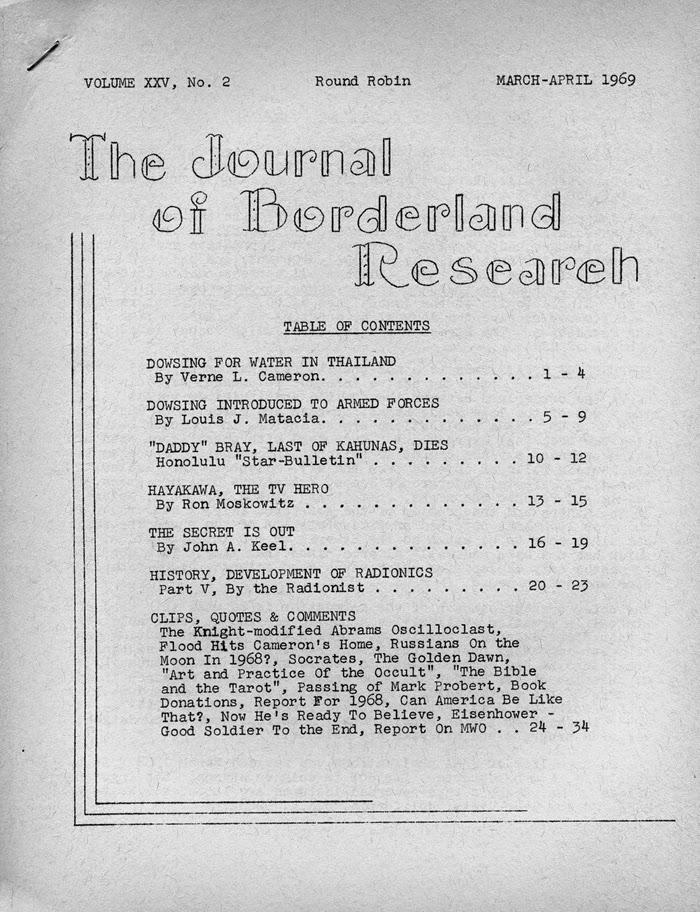 I´ve always admired his ambition and motto presented in the first editorial July-August 1959 under the headline, About the New Editor: "Since coming to the mainland my lectures have been concerned with the problem of relating Flying Saucer data, and phenomena, to the teachings of the Mystery Schools. I believe you´ll agree this is no easy task. If I have one goal in life it is un uncompromising search for Truth, whatever that might be, and wherever it may lead."

The Journal of Borderland Research is a treasure trove of unusual data and theories. Riley Crabb always presented interesting and challenging views on many subjects. Maybe he was a little too naive or open minded when accepting channeled information from various sources but he still printed (may-June 1981) my very critical review of Briefing For the Landing on Planet Earth, by Stuart Holroyd. More and more I have come to appreciate his political leftwing comments in the journal. Comments he often received harsh criticism for. But he was very well aware of the dangers from the ever growing Corporatocracy and would have loved Confessions of an Economic Hit Man by John Perkins. A book that should be studied by all people interested in world politics and economic history. 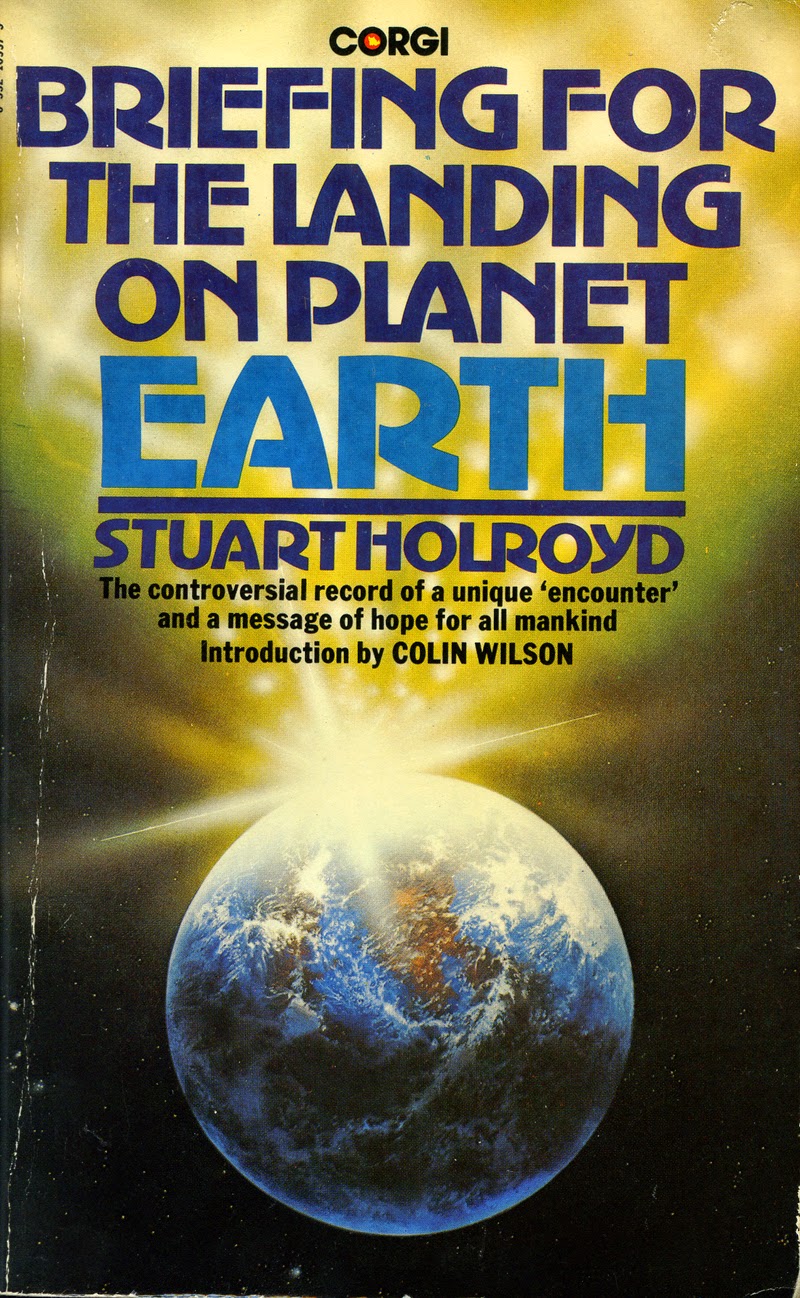 For many years Riley Crabb tried to awaken leading theosophists to the importance of the UFO phenomenon, without much success. Looking back on these efforts in a letter to Flying Saucer Review editor Gordon Creighton on August 5, 1990 he wrote: "It is now obvious to me that one of my major reasons for being here in New Zealand is to try to awaken the leaders of the Theosophical Lodges to the realities of other inhabited planets and of advanced beings from them, quoting their own earliest literature... when I quoted the early literature on space travel to Joy Mills, one of the leading American Theosophists at Krotona, Ojai, California, she replied that the references were "allegorical", hah!! She also quoted Jung on UFOs in his book, that the space craft were images in the race mind".

Riley´s wife Judy died on July 12, 1985. It is heartbreaking to read his last letter to me April 6, 1985 where he gives a very realistic picture of all the daily practical problem he is confronted with while nursing his dying wife. But life soon changed to the better. Riley Crabb moved to New Zealand after his wife´s death where he found a new love and married Phyllis Hall. They continued theosophical and borderland work together and he also published some booklets from NZ, like Theosophy on the Space Age. He died in 1994. 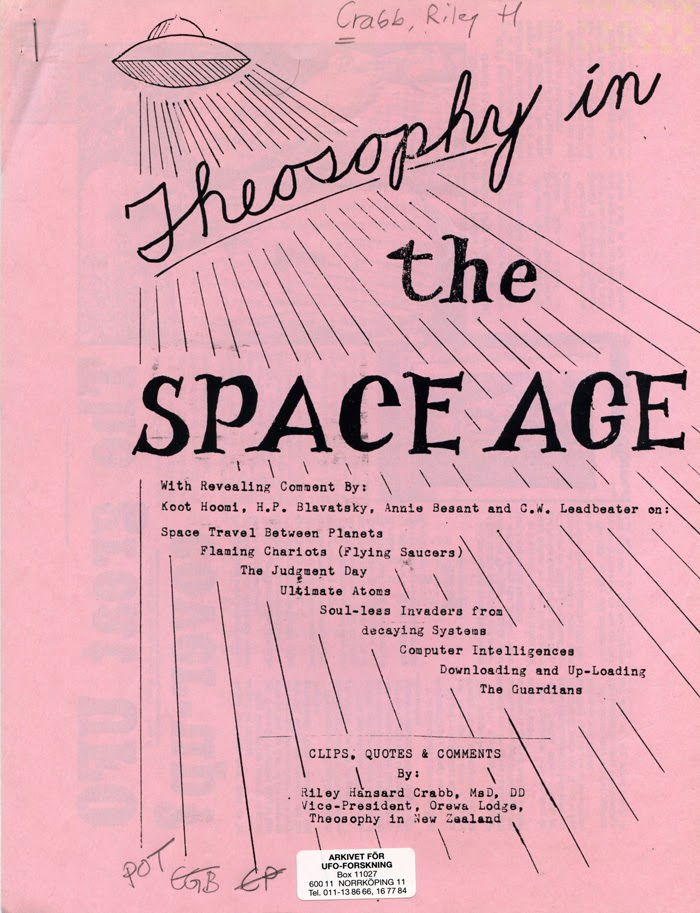