A close encounter during the war

The following case came to my attention in October 1996 when I received the original document from Christian Fester, M.D. His wife was Siw Fester, who experienced an extraordinary close encounter and landing case on August 21, 1983, which I mentioned in an earlier blog entry. Christian Fester lectured on his wife´s UFO encounter to Norrköpings UFO-förening on October 14, 1996. 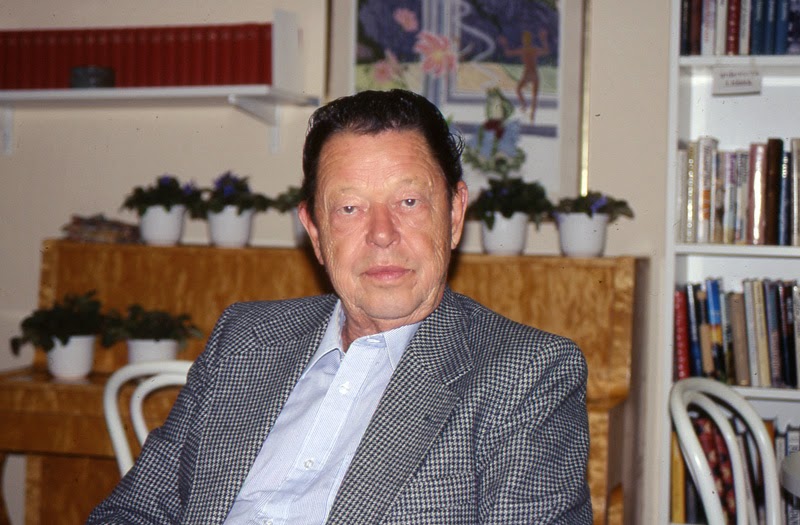 Christian Fester during a interview in 1996

Christian and Siw Fester had received the written document in 1988. They were sent by Erich Svensson, brother of the witness Arne Svensson. In 1996 I contacted Erich Svensson to gather some more data on the case. Unfortunately I didn´t at the time pursue the documentation any further but I regard the case of special interest as it happened in 1943, before the UFO era. The original witness died in the beginning of the 1990s.

In a phone conversation October 20, 1996 Erich Svensson related the following details regarding his brother. Arne documented his experiences in a manuscript written shortly after it had happened. He kept the manuscript hidden in a secret place in a drawer as he didn´t want to be laughed at during his lifetime. In the 1970s Arne finally revealed the secret to his brother, tears streaming when he told of the incident that had affected him so deeply. "You can thank God it didn´t happen to you", he told Erich. Arne was a big och physically strong man born in 1913. He worked as a clerk at a paper mill in Örebro, Sweden. This was his only UFO experience. 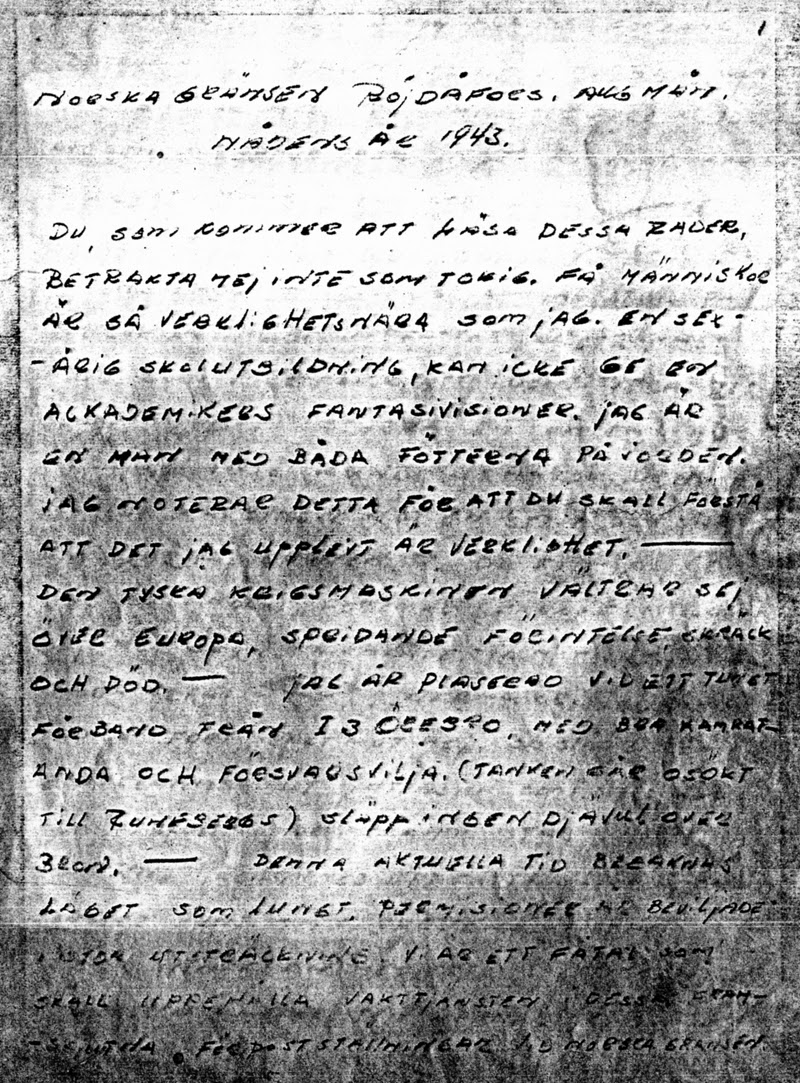 During the Second World War Arne Svensson was stationed at the Swedish-Norwegian border between 1941-1944. He was attached to the I 3 military unit of Örebro with regular guard duty at the border between Sweden and Norway at a place named Röjdåfors, about 40 Swedish kilometers north of Torsby, in the province Värmland. The incident occured sometimes in August 1943.

Arne begins his guard duty att 10 P.M. The former guard report that all is quiet. "Standing at the post I become aware of a faint sound that I couldn´t identify. It encreased very fast in strength, the tone becoming unbearably strong. I put the rifle towards a rock and put my fingers in the ears. Suddenly I notice a dark object in the sky, looking like two saucers put together. It is coming right towards me very fast, emitting what looks like intensive welding flames. The craft stops in midair and I notice small windows around the central part, emitting a bluewhite light. The bottom of the craft opens up and a small round object comes out sinking towards the ground. Flames are emitted from a central belt on this object, like som form of steering mechanism."

Original drawing of the craft by Arne Svensson

Arne is blinded by the strong light. His eyes feel like there is gravel beneath the eyelids. With tears running, fear and terror engulf him. He tries to shout, with no success, neither can he telephone his military unit or run. Arne cannot move and he feels nauseated and dizzy. There is a smell like sulphur in the air. "I feel an intensive pain in my left arm and behind the tears I notice that the bracelet is emitting a strong light. I succeed in yanking off the wristwatch. There is a faint light, a strong swishing sound and all becomes peaceful. Time and space disappear. I can hear the next guard like a voice far away: "Go home and go to bed. You are not well"".

Arne gets a sick leave for three days. His doctor cannot find anything wrong with his condition except a few small burns around his left arm and the middle finger on the right arm. Arne goes back to the place where it happened and finds the rifle loaded standing towards a tree. But he has a hard time getting the cartridge from the rifle because part of it is covered with small dots like welding sparks. Eventually he also locates his missing wristwatch. It had stopped at 10.13 P.M and the watch-case is also covered with what looks like welding sparks. The bracelet is totally black. Later a watchmaker complains: "What the hell have you done with this watch. It is welded inside and there is nothing I can do." Unfortunately this wristwatch is gone, according to Erich Svensson.

For several days Arne scrutized the place where he had been that fateful night. About 500 meters from the command post all vegetation was burned in a square of 30 x 30 meters. There was also the same smell of sulphur at this place, though somewhat weaker.

Arne Svensson concludes his written document with these words: "I have seen German and Swedish airplanes and in the 1920s I saw the dirigible Italia. There is nothing in shape or speed that can be compared with this unknown.
Are we observered from somewhere else?
Do we have visitors from other planets?
You who is now reading this will maybe dismiss all with a smile and say phantasy.
Maybe you have the answer, which I am convinced will come in the future.
Today we are sitting in a tent in the woods of Värmland listening to news about the Germans from a small box (radio) placed in the straw.
What will happen in the unknown future. I have tried to describe an experience that has convinced me that we have visitors from somewhere else, in spite of what scholars say."

In his letter to me in 1996 Erich Svensson comments that his brother was a down to earth man and very trustworthy. He is convinced that the document is an honest description of what actually happened. What I do find somewhat extraordinary is that Arne is convinced already in 1943 that this was an interplanetary craft instead of some secret German airplane. This mystery will remain as both Arne and his brother Erich are dead since many years. What we have left is the story of an intriguing encounter with an unknown craft.