This humanoid close encounter case has become a classic in Swedish ufology. It was documented by one of the first active field investigators in Sweden, Sven Schalin. Unfortunately we have never been able to trace the original witnesses which of course reduces the credibility of the case. But I still think it is worth  a presentation because of several unique details in the story.

The incident occured on the evening of August 23, 1967 in Kolmården, a small community close to my hometown Norrköping. The witnesses were two teenagers around 15 years of age, "Peter" and his girlfriend "Fia". Sven Schalin heard of the incident from a workmate to Fia´s father on August 25 och visited the family of Fia on August 26. Here he interviewed Fia´s parents and the also the teenagers. A couple of days later he paid a second visit and did a more thorough interview with Peter and Fia. The witnesses wanted to remain anonymous because of the high strangeness of what had happened.

It was a little past 8.00 p.m. on August 23 when Peter and Fia was strolling on a small road close to an industrial plot in the small community. The sun had just set and it was twilight. Suddenly the teenagers notice a red light over the trees in a nearby forest. The light is not very bright, has no special shape and there is no sound as it descends rather fast towards the ground in front of the forest. Peter and Fia become apprehensive as they have a feeling of being observed and they decide to leave the spot and head for home.

On their way home they notice that the red light once again has risen and hovers above the forest. Close to home they feel safer and they decide to follow another road to find out what has happened to the light. Once again the notice the red light but it disappears from the forest and is gone. Peter and Fia arrive at an uninhabited cottage and to their surprise small yellow lights are hovering and moving around the place. In one of the windows the notice that the lights are also inside the cottage and there is a distinct sound like someone pounding on wood. While watching these lights the teenagers discover that the red light has appeared once again and is coming in lower than before and "landing" not far from a brook nearby.

Peter and Fia are now rather frightened and return home at a fast pace on the same road. Close to home a small round light suddenly appears in front of them, not more than three meters from the ground and and at the same distance. Like a flashlight hanging in the air. A very sharp whistling sound is heard from nearby and fast and light footsteps are coming closer. Suddenly a figure jumps up from behind the bushes or it rather seems to float up not more than ten meters from Peter and Fia.

The figure is not more than 130 centimeter in height, wearing dark clothing. As it is rather dark they can´t at first observe the face and Fia get the idea that it could be a friend of hers playing some trick and she takes a few steps closer wherein the figure rases the arms and looks straight at Fia. The movements are jerky and unnatural. Peter immediately realize that something is wrong. He grabs Fia shouting "watch out, he is not human". The figure carries some form of object in the left hand which it points to the teenagers. The object is obviously heavy as the humanoid have to use the right arm as support. There is some sort of light visible on the top of the object. Very frightened the teenagers turn around and run home telling their parents and sisters what had occured. 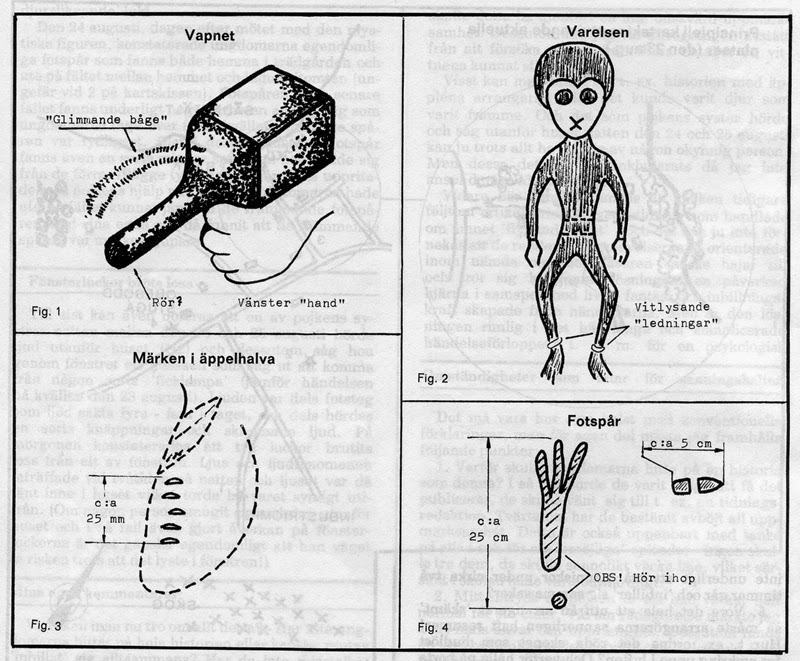 The humanoid had a head out proportion to the body that was skinny. Some sort of hood seemed to cover part of the head. Eyes were dark and Peter experienced the gaze as intensive and nasty. Mouth and nose appeared like an X. The humanoid looked bow-legged and had some wire around the ankles that for a short moment shone with a bright white light. It appeared both tough and somewhat frightened, shivering.

Ufologist Sven Schalin could find no natural explanation for the case. He regarded the witnesses as sincere and serious when recounting the experience. Peter´s mother confirmed that the teenagers were shocked when coming home and Peter didn´t want to go outside after dark for some time. This was an unusual behavior on his part. The day after the incident strange "footprints" were found at the spot where the humanoid had been observed.


Artist Lennart Moberg with an illustration of the incident

Provided this case is valid what do we have here? A visitor from the multiverse, a robot used by aliens from somewhere, a leprechaun, a sportive nature spirit materializing and playing tricks on unsuspecting teenagers?