On November 17 British author Doris Lessing (1919-2013) died, aged 94, at her home in London. She was awarded the Nobel Prize in Literature in 2007. Once asked what she considered her foremost works she answered that it was the five novels collectively known as Canopus in Argus: Archives, written between 1979-1983. This was a surprising answer to all who were not aware of Doris Lessing´s profound interest in mysticism and esoteric traditions, especially Sufism. That the Sufi tradition was an important philosophy and the ideological basis of many of her later novels was totally missed in the obituaries and articles in the Swedish press. The word Sufism is not even mentioned in the largest newspapers Dagens Nyheter and Svenska Dagbladet or the local daily, Norrköpings Tidningar. By omitting this important influence the Swedish biographical articles become notably onesided and biased. The reason is probably that mainstream Swedish literary critics and journalists have no knowledge of mystical and esoteric traditions. They are what Theosophist and former BSRF director Riley Crabb used to call metaphysical illiterates.

During the first decades of her literary career Doris Lessing wrote novels with political, social, feminist and psychological themes, often from a radical left wing perspective. For a few years she was a member of the Communist Party, but became disillusioned by the materialism and lack of a spiritual dimension in Marxism. In 1964 she read the book that would change her life, The Sufis, by Idries Shah, author and teacher in the Sufi tradition. Lessing contacted Shah and they became lifelong friends and he her spiritual mentor. Ideas and conceptions from Sufism was incorporated in many of her novels from the 1970s.

In 1979 Doris Lessing, known and respected as a radical and feminist author, provoked the reading public with the novel Shikasta, the first volume in the Canopus in Argus series. Many mainstream literary critics regarded it as incomprehensible and second rate science fiction. But this and subsequent titles in the series were not technological sci-fi stories but a presentation of Sufi concepts and esoteric ideas in a science fiction setting. 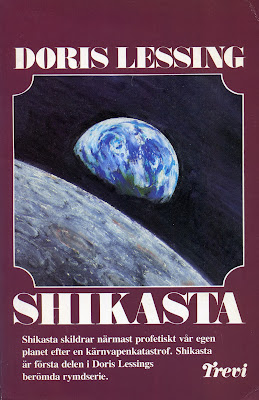 The Canopus in Argus novels is the story of interstellar intervention with the aim to accelerate the biological and cultural evolution of Earth (Shikasta). Early in Earth history extraterrestrials from Canopus visited our planet and tried to civilize the the primitive inhabitants with genetic engineering and cultural influence. After a cosmic catastrophe contact is partially broken and another group arrives with evil intentions, spreading violence, hate and destruction. Both groups infiltrate their agents on Shikasta and the story is presented through the eyes of George Sherban, a Canopus agent.

After Shikasta there were four more volumes in the series. Anyone acquainted with the esoteric tradition will immediately recognize ideas and themes from the Ancient Wisdom. Volume three, The Sirian Experients, is especially interesting because of Doris Lessing´s preface: "I think it is likely that our view of ourselves as a species on this planet now is inaccurate, and will strike those who come after us as inadequate as the world view of, let´s say, the inhabitants of New Guinea seems to us. That our current view of ourselves as a species is wrong. That we know very little about what is going on. That a great deal of what is going on is not told to ordinary citizens, but remains the property of small castes and juntas." 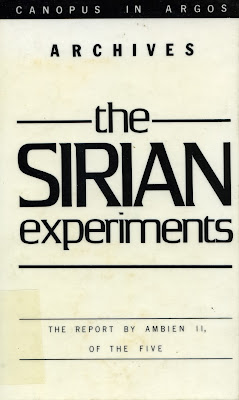 In a further comment Doris Lessing´s interest in both UFOs and the esoteric tradition becomes even more explicit: "I would not be at all surprised to find out that this earth had been used for the purposes of experiment by more advanced creatures... and that there might have been a science in the past which we have forgotten... that we may be enslaved in ways we know nothing about, befriended in ways we know nothing about... As for UFOs, we may hardly disbelieve in what is so plentifully vouched for by so many sound, responsible, sensible people, scientific and secular".

Readers who wish to explore the Sufi ideas of Doris Lessing find much of interest in Between East and West. Sufism in the Novels of Doris Lessing.
Posted by Håkan Blomqvist at Tuesday, November 19, 2013