"I believe it is the Russians"

There are around 20.000 documented UFO sighting reports in the AFU files. Most of these are of course misidentifications of ordinary objects. But several hundred remain unexplained after investigation. Perusing these files there is one question in the report form I find particularly interesting: "What is your personal opinion regarding the object you observed?" Here we often find answers like, "I don´t know" or "UFO". But in a few cases the witnesses themselves are more skeptical than the field investigators even though they are reporting a classic close encounter. These cases are interesting from a psychological and sociological perspective. Here is one example from the AFU files.

At five minutes past two on the night of August 21, 1983, Mrs Siw Fester wakes up with a strange feeling of unease in her body. She is staying with her son at the family`s summerhouse in Haverdal on the Swedish west coast, not far from the city of Halmstad. Her husband, the physician Dr. Christian Fester, is at his work in Norrköping. When turning on a small lamp beside the bed she notice that it is unusually light in the room but sweaty and thirsty Siw goes to the bathroom for some water. Looking out of the window in the bathroom she beholds a sight she would never forget. "Even today I sometimes wake up in the middle of the night terrified with nightmares from the memory of what I observered", she told a magazine in 1987. Not more than 120 meters from the house a large saucer shaped object is hovering over a meadow. It is surrounded by a very bright yellow-white light, so strong that the whole area is lighted up. The saucer-shaped object appears to be around 10-15 meters in diameter and is emitting a humming sound. 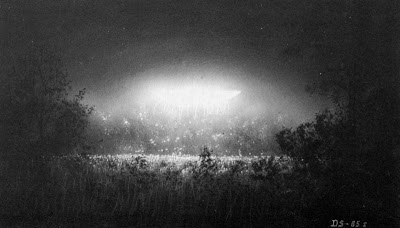 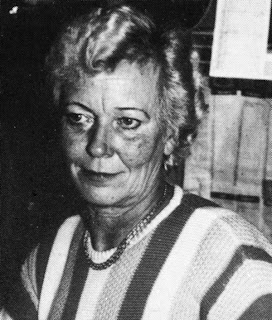 Siw is terrified by this unknown intruder and also experience some form of "magnetic" influence from the object. She is unable to move. "It felt like I was standing in syrup and after a while I became paralysed and couldn´t move a muscle." There is an intense heat coming from the object and Siw is sweating profusely. To her this thing above the meadow appears almost alive. Suddenly ten to twelve legs protrude making the object look like a giant spider in the air and it descends to the ground standing on the legs. The humming sound stops and Siw can move again after watching the objects for thirty minutes. Trembling with fear she goes to another room in the house to see whether some of her neighbours are awake but there is no light in any window. Her young son is sleeping in an adjacent room but Siw refrains from waking him up as she doesn´t want to frighten him. Instead she goes back to her bed and pull the blanket over her head, hoping the object will go away. 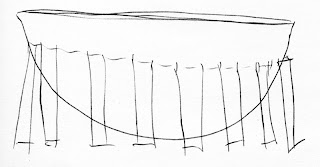 The object according to Siw Fester

Unable to sleep Siw spends the night listening for sounds and wondering what she has witnessed. Early in the morning she calls her husband and relates what has happened. The couple have been married for thirty years and Christian asserts, in an interview later, that his wife is not suffering from hallucinations, sleep walking, nor is she interested in UFOs or the paranormal. She is a very realistic woman, not the fantasy type. After talking to her husband Siw visits her neighbors and relates what she has witnessed during the night. Together they walk up to the field where the object landed. They discover a large circle, around eight meters in diameter, where the grass i flattened and burned. There is also a small trail in the grass, from the burned circle, leading to the woods. This trail has not been seen before. 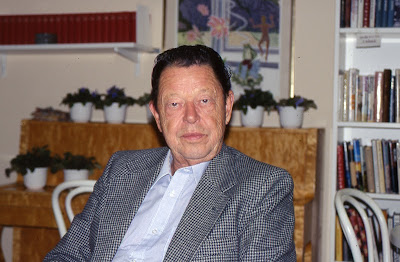 Dr. Christian Fester during an interview at AFU October 14, 1996

Siw was not the only witness to the unknown this night. Another of her neighbors, a woman in her thirties, was coming home by car from Halmstad around midnight. Not far from home she experienced a strange feeling of unreality. In an interview some years later she told me it was like "entering an inflated plastic bag, a vacuum world". After parking the car the woman notice a figure standing by the fence at her house. Believing at first it is her fiancé, wearing a white shirt, she calls him but there is no answer. Coming closer an oviformed luminous figure appear, shining like a neon light. Trying to enter the house the woman is met by an invisible wall, like some kind of energy field. She has no memory of what happened after she entered this field, but she "wakes up" in the same place when one hour has passed. The entity is gone and the woman enteres her house and starts reading a book in the middle of the night - something she has never done before. She felt no fear during this unusual episode.

There were several observations of strange lights in the sky around Halmstad this night. Further investigation would even after so many years probably discover more close encounters during the same night. There are rumours of another landing nearby. In 1984 Swedish ufologists Carl-Anton Mattsson and Dan Mattsson interviewed Siw Fester in her home in Norrköping. Here are some excerpts from the conversation:
Siw: Ok, but what do you belive, I want to know your opinion?
Dan: It is easieast to believe that this was visitors from outer space.
Siw: So, that is what you believe?
Carl-Anton: No, but it is the first we come to think of.
Dan: The most simple solution.
Siw: So, that is your belief?
Carl-Anton: Yes, it is a possibility.
Siw: Well, if I am allowed to express my personal opinion on this thing, I believe it is the Russians... I definitely believe it is the Russians, they are doing a lot of strange things down here. I believe the Russians are doing some kind of research here on the west coast.

This answer from a witness is of course rather unusual after such a close encounter. A statistical study of what the witnesses themselves belived they observered would be interesting both from a psychological and sociological point of view. It would also yield more data on paradigms and cultural influences.