From phenomena to philosophy

Most serious field investigators who have spent years documenting UFO, Fortean and paranormal phenomena sooner or later come to a point where they start asking themselves the basic question: what are the implications of all these phenomena? There are of course ufologists and Forteans who gather cases like stamp collectors, without bothering about paradigm issues or the scientific and philosophical challenges implied by the phenomena. But for investigators with a scholarly or intellectual approach the various phenomena are usually the starting point of a life long search for the deeper existential questions.

This was the experience of journalist John A. Keel after his years of investigations of UFOs and paranormal phenomena in the Ohio Valley in the 1960s. In his seminal Operation Trojan Horse (1970) he writes: " Previous to all this I was a typical hard-boiled skeptic. I sneered at the occult. I had once published a book, Jadoo, which denigrated the mystical legends of the Orient. I tried to adopt a very scientific approach to ufology, and this meant that I scoffed at the many contactee reports. But as my experiences mounted and investigations broadened, I rapidly changed my views". Towards the end of his book he concludes: "I have dealt with thousands of honest, sincere witnesses by mail, phone, and in person. My skepticism has melted away, and I have turned from science to philosophy in my search for the elusive truth". 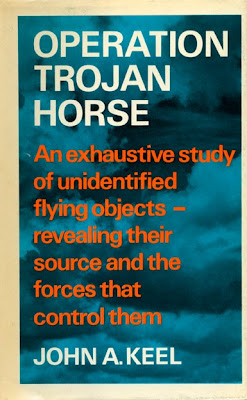 What I find impressive with Keel is his iconoclastic, non-conformist approach to the subject combined with a wonderful humour. Necessary qualities if you are to enter the strange underground world of UFOs and the paranormal. When he visited Sweden in 1976 and I had the good fortune of meeting him for a long and interesting chat, he signed my copy of Operation Trojan Horse with the words: "The secret to the UFOs is on page 321." The book ends on page 320. That´s John Keel. 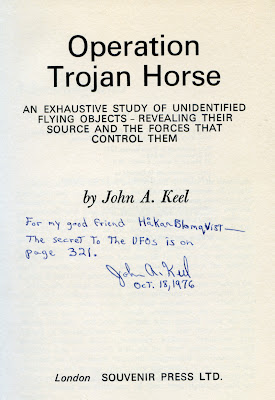 Field investigators who from personal experience have discovered that the orthodox reductionist-materialist paradigm is untenable when confronted with UFOs and paranormal phenomena find themselves facing a dilemma. How to find a world view or paradigm that can be used as a reasonable working hypothesis to account for all the unexplained phenomena? Entering the field of alternative world views is for many a mission impossible with the hundreds of conflicting teachings from different groups and cults. Like entering a djungle full of snakes and swamps. Still, a pathfinder force attitude to this problem is necessary. No other option is possible unless of course you are satisfied with being a "stamp collector". First generation ufologist Aimé Michel expressed this in his own eloquent way, as told to Jacques Vallee: "Ufology is not a science but a process of initiation. One starts with field investigation and ends up studying Arab mystics".

But let´s leave the existential issues and proceed to a Swedish UFO observation I investigated several years ago. This incident happened in May 1970 not far from the village Stjärnhov in the Swedish province of Södermanland. There were two witnesses, Rolf Gohs and Peter Ingemark. Here is Rolf Gohs version of what they experienced: "In the spring of 1970 I was for a two days visit at Peter Ingemark, then living at the Solbacka rectory. It was resplendent sunshine och we went for a long walk together with Ingemar´s dog. After about two hours we came to a bend in the road. We stopped and noticed that the dog felt something and he rushed into the woods. We heard it barking at a distance and wondered what had happened.

Suddenly I heard a sound like an angry wasp close to the ear. I turned around and observed a black, flat or round - maybe oval - object fly across the road and over the woods behind me. The top of the fir-trees were flattened by the object´s speed. And then the strangest of all. The object just disappeared in thin air, like you turn of a lamp. There was a eerie silence. We just stood there for a while, staring and chocked. After quite some time the dog came back from the woods. It was totally exhausted. We didn´t say much during our walk back." 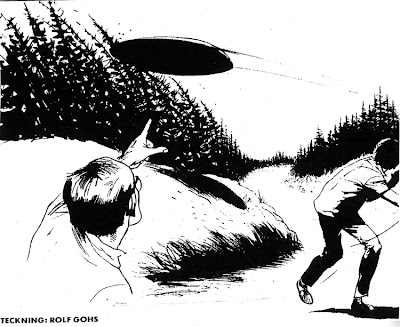 After more than ten years Rolf and Peter finally decided to openly recount their experience and they were interviewed in the Swedish daily Eskilstuna-Kuriren February 7, 1981. I have talked to both witnesses several times and after many years they were still puzzled by what had happened. Peter Ingemark made this final comment as to the origin of the object: "I really have no idea and no specific belief. The only explanation I can think of is some kind of craft, whether extra terrestrial or some military test vehicle. But that would be a sensation." 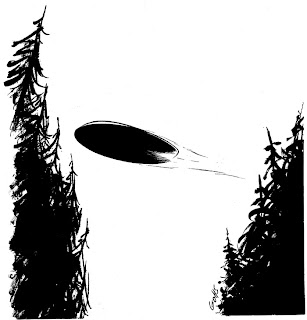 The "angry wasp" sound, eerie silence and the instant disappearance of the object is classic UFO behavior recognized by all UFO field investigators. But from where did this object come? A visitor from Magonia?
Posted by Håkan Blomqvist at Thursday, September 19, 2013