Alice A. Bailey - The Unlikely Occultist

How to introduce esotericism as a profound philosophy and tenable worldview to the intellectual, cultural and scientific elite? A somewhat unusual method of handling this issue is writing a novel. When I first discovered The Unlikely Occultist. A Biographical Novel of Alice A. Bailey, written by Australian author Isobel Blackthorn, I felt somewhat apprehensive. Being a student of esotericism for many years I first assumed this was just another sensational potboiler by someone not much versed in the Esoteric Tradition. I was wrong. 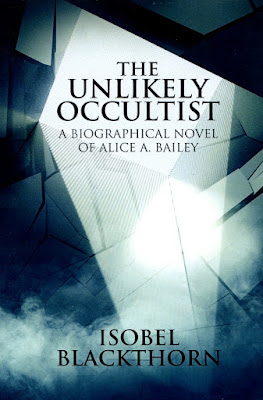 In a short author´s note in the beginning of The Unlikely Occultist, Isobel Blackthorn writes: ”This portrait of Alice A. Bailey is based on a deep and prolonged study of her life and teachings.” All this study and research has resulted in a PhD from the University of Western Sydney, Australia. Her thesis The Texts of Alice A. Bailey. An Inquiry Into the Role of Esotericism in Transforming Consciousness (2006) is published under her former name Isobel Wightman and aviable online. Besides this special interest Isobel is a prolific novelist or as she prefer to designate herself, ”author of diverse quality fiction”, but she is also a humanitarian, a campaigner for social justice and a qualified astrologer. 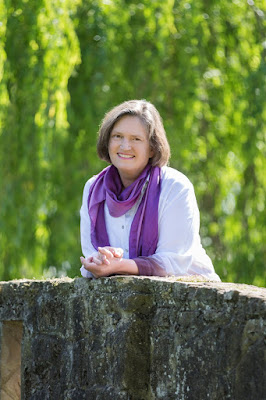 As a retired librarian I was immediately charmed by the fact that part of the narrative centers around the ficticious Heather Brown, librarian at the State Library of Victoria in Melbourne, Australia. During an routine inventory of boxes from the late Professor Samantha Foyle she discovers that the boxes comprise a large collection of Esoterica, especially Theosophy and Alice Bailey, a special research interest of Professor Foyle. Out of curiosity Heather begin reading The Unfinished Autobiography of Alice A. Bailey and is immediately hooked, and becomes deeply fascinated by the life of this unusual woman and ”unlikely occultist”. The reader can then follow two parallell stories, the life of Heather Brown coupled with the real life of Alice Bailey as told in her autobiography. The major characters in the novel are based on real people while their personalities and attitudes are more or less fictitious.

Those who have read Alice Bailey´s autobiography recognize the stages in her life: the strict and orthodox Christian upbringing in a wealthy British family, evangelical work in Britain and India, where she met her first husband, a distrastrous marriage resulting in three daughters. The move to America, conversion to Theosophy and finally the founding of The Arcane School in 1923, together with her second husband Foster Bailey. The narrative alters between the lives of Alice and Heather, who becomes more and more obsessed to find out why Alice Bailey, in spite being regarded as the mother of the New Age movement, is now so forgotten and criticized: ”Carl Jung and his intellectual coterie were the last piece in a jigsaw of condemnation… she had been abused by a violent husband, and then vilified and ostracised by purist Theosophists, the Jewish community, fundamentalist Christians, conspiracy theorists and leading scholars in the field of western esotericism.” (p. 295) 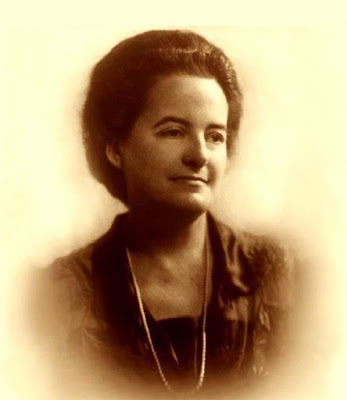 It is fascinating to follow how Isobel portrays the mindset and moral attitude of Alice Bailey. Not an easy undertaking as the scenes and anecdotes presented may create new myths around a woman already a favourite among conspiracy advocates. Reality and fiction becomes blurred. In the novel Alice is generally presented as a very strict moralist, especially when it comes to sex, nudity and her daughters upbringing. Very much different from her husband Foster: ”He was a perfect companion who held the vision as close to his own heart as she, yet he didn´t share her moral propriety. His was a more fluid, liberal morality…” (p. 140). This is exemplified in a scene at a conference in Ascona, Switzerland where Foster is observed sunbathing in the nude on a raft. For this shocking behavior he is heavily lambasted by Alice, who is very much afraid his act has damaged the reputation of the Arcane School.

Among esotericists a renewed debate has recently come up regarding the possible discipleship of Dag Hammarskjöld. Isobel Blackthorn mention an interesting speech (p. 5), written in the 1970s, by New Age activist Donald Keyes, who was also speechwriter for Secretary-General U Thant in the 1960s and Founder/President of Planetary Citizens. The speech can be found posted online. This quote is of special significance: ”In one of Alice A. Bailey´s books, written in the 1930s, there is a statement that a leading Swedish disciple would soon be working in the world. A high Swedish initiate who was a friend of mine was once asked if the foretold one were he. His answer was ”no, it is Dag Hammarskjöld”.”

I was not aware of this document but Donald Keyes is not the first to refer to Hammarskjöld as disciple. In the writings of Swedish esotericist Henry T. Laurency I have found two quotes referring to this issue, written in the beginning of the 1960s:
”That does not at all mean that they need to be aware of this in their present incarnation. Most often they are not. Neither Franklin Roosevelt, nor Winston Churchill, or Dag Hammarskjöld knew that they were disciples.” (Henry T. Laurency, Knowledge of Life Three, Esoteric Knowledge Orders, p. 8, digital ed.)

”… Mustafa Kemal, Franklin D. Roosevelt, Winston Churchill, and Dag Hammarskjöld (were
unbeknownst to themselves) disciples of the planetary hierarchy.” (Henry T. Laurency, The Way of Man, 9 The Second Self, p. 84, digital ed.)

The actual quote by the Tibetan can be found in Bailey´s A Treatise on White Magic, p. 79: ”… They are aided by a disciple of rare capability in Sweden”.  I have always maintained that this is a reference Henry T. Laurency, who was a disciple of the adept known as Hilarion and Laurency was certainly a ”rare capability”. But of course it may also have been Hammarskjöld. We can only speculate. I do wonder who the ”high Swedish initiate” known by Donald Keyes was? Could it have been Laurency himself?

From an esoteric viewpoint I have found no actual mistakes in the text, with the possible exception of a designation on page 8: ”Heather half expected the Buddha to appear from behind the fresco and greet the Christ standing before the altar, the heads of a spiritual hierarchy of ascenden masters central to Alice Bailey´s occult scheme.” Esotericists should refrain from using the term ”ascended masters” as this will associate Bailey with the I Am-movement and its offshoots. Ascended Masters was a concept advocated by Guy and Edna Ballard of the I Am-movement. The Tibetan is very explicit and critical, referring to the I Am Movement as a "cheap comedy" and travesty of the esoteric tradition. (Alice Bailey, The Rays and the Initiations, p.16).

Although The Unlikely Occultist can be considered as a defense or apology for Alice Bailey and esotericism, Isobel Blackthorn is no naive devotee. Like many critics she has noticed several controversial statements in the Bailey volumes that taken out of context could be used as a pretext for racism, antisemitism and persecution of homosexuals. The problem is that it is often difficult to assess what is Alice Bailey´s personal idiosyncracies and what is actual quotes from the Tibetan. Bailey was a unique amanuensis but heavely influenced by her fundamentalist Christian background. Isobel Blackthorn makes this relevant comment in the novel: ”It appeared she had taken the notions of Christian goodwill and service, and blended them with the Buddhist idea fo right relations. She never left her old faith behind; she dressed it up in new clothes.” (p. 87).

What is Isobel Blackthorn´s present view of Alice Bailey and her work? This quote from Isobel website is from what understand a good summary:
”For too long Alice Bailey has been either maligned or ignored and I think it is time the world knew just how important her body of work and her life’s mission are, influencing healing modalities, psychology, education, the ongoing campaign for world peace and the spiritual ethos at the United Nations. ”

I highly recommend The Unlikely Occultist. I found it intensely captivating and enchanting. This work can actually function as an introduction to studies in the Esoteric Tradition and may even inspire a minor renaissance for Alice Bailey. Esotericists will be delighted by this biographical novel and if you are a librarian or archivist you will just love it.
Posted by Håkan Blomqvist at Wednesday, May 01, 2019