Who was Paul M. Vest?

Was there a hidden hand, an ancient esoteric society behind some of the first UFO contactees of the 1950s? Were George Adamski, Orfeo Angelucci, Daniel Fry, George Van Tassel, Howard Menger a.o. involved in a test made by this hidden group? This is the controversial basic theme and theory presented and documented in my new book Gudarna återvänder. Ufo och den esoteriska traditionen (Return of the Gods. UFOs and the Esoteric Tradition). The book can now be ordered directly from Nomen Publishing House or Bokus.

I have discussed this variation of Vallee´s esoteric intervention theory in several earlier blog entries. Much additional data and a new dimensions to this theory was provided by the Theosophical scholar Joscelyn Godwin who kindly sent me part of an unpublished manuscript documenting a hidden hand behind the outbreak of the first, very physical, spiritualistic phenomena in the 19th century. He has also delved into this intriguing hypothesis in a four part series of articles, The Hidden Hand, in the academic journal Theosophical History 1990-91. According to official theosophical documents, written by Constance Wachtmeister, Charles Leadbeater and Annie Besant the first 19th century spiritualist phenomena were created by a secret lodge, The Yucatan Brotherhood, custodians of the Ancient Wisdom and a branch of the planetary guardians. The object was to challenge the materialistic worldview by creating “unexplained” phenomena. Was this lodge also the hidden hand behind the 1950s contactees? 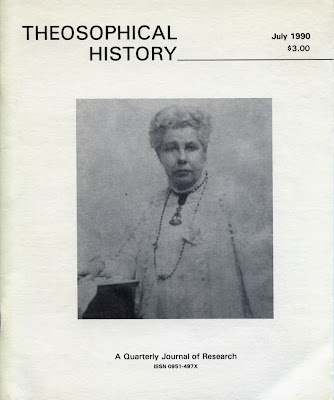 An important source of information that made me seriously consider the possibility of an esoteric society behind some of the 1950s contactees was several articles by the american journalist Paul M. Vest. He was a frequent contributor to Fate magazine in the 1950s and 60s. Vest was obviously very well informed on the esoteric tradition and paranormal phenomena. His article on Theosophy and Helena Petrovna Blavatsky in Fate (October 1951) received favourable comments from Boris de Zirkoff, editor of the Collected Writings of H. P. Blavatsky (Fate, February-March 1952).Vest wrote articles on subjects like medium Daniel Dunglas Home, fairies, Alice Bailey, The Count of Saint-Germain and he also revealed several personal paranormal experiences in Fate´s column True Mystic Experiences.

But the most important and really intriguing article from the pen of Paul M. Vest, Venusians Walk Our Streets was printed in Ray Palmer´s magazine Mystic Magazine, August 1954, also reprinted in The Journal of Borderland Research, March-April 1982. One day in the summer of 1953 Vest receives a phone call from a man calling himself Bill, who asks for a meeting to discuss some articles. He appear in a rather mysterious way at a bus station in Santa Monica, California and they travel by car to Vest´s apartment. Bill has dark, almost black eyes, black hair, high cheekbones which give him a somewhat oriental look. His skin is unusually white and the fingers very long and tapering and seem to be without joints. What makes Paul Vest very intrigued is that Bill´s hand feels like it has no bone structure beneath the skin. 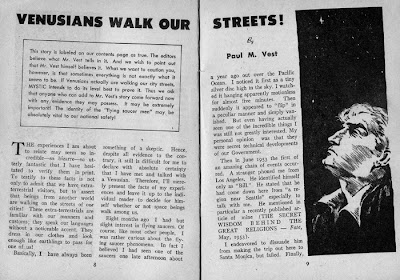 Years of research and experience in occult and paranormal phenomena has made Paul Vest something of a skeptic: "I have met swamis, yogis, mediums, clairvoyants, mystics and self styled messiahs by the score, but I have never been duped by any one of them, even those who were sincere but self-deceived. Also I have met several persons whom I know without any doubt to be true spiritual adepts; even as I have known several sensitives, or mediums, who are honest, sincere and able to produce authentic paranormal phenomena." But this person, Bill, "was like no person I have ever encountered before".

Bill wants Paul Vest to contact and write an article about Orfeo Angelucci as he has made a trip in "what is popularly known as a flying saucer." After a skeptical comment by Paul the stranger continues: "Orfeo needs help now! That´s the primary reason They sent me. To request that you aid him in telling his experiences to more people." Bill mention that Angelucci has met highly developed extraterrestrials but that he is not one of them. Bill also give name and telephone number to several other individuals who have been contacted and ask Paul to check the stories. One of these is Maurice Beam, reporter on Los Angeles Times. 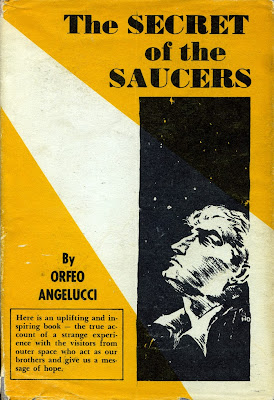 When Bill has left, Paul Vest contacts the people on the list and they all confirm meeting this strange man, also known as Mr. Wheeler. Orfeo Angeluccis wife Mabel was not amused by the visit: "Oh, that man gave me the creeps. He rang the doorbell one day and introduced himself with an odd name I can´t remember. He seemed to know everything about us. It frightened me - there was something so strange and downright weird about him." But Paul Vest follows the advice of Bill and write three articles for Mystic Magazine on the experiences of Orfeo Angelucci, published in November 1953, May 1954 and October 1954. 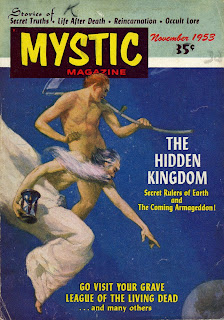 The story of Mr. Wheeler´s involvement with many contactees and ufologists in the 1950s is very well documented in several books and articles. A good source is The Great Venusian Mystery by James Crenshaw (Fate, June 1966). Even the skeptical ufologists James Moseley regarded it as "one of the strangest saucer cases I have ever been involved with" (The Wright Field Story, 1971, p. 13). I have found many new data and documents on this case, presented in my book, indicating an apparent connection with the esoteric tradition and a hidden hand behind the UFO contactees in the 1950s. But I have not succeded in finding any biographical data on journalist Paul M. Vest and find it notable that no american ufologist have followed up on this case or made an interview with Paul M. Vest. Maybe someone reading this blog can provide more clues?

Whoever Bill or Mr. Wheeler was, during the short meeting, he revealed to Paul M. Vest a vast knowledge of the Ancient Wisdom. After his initial apprehension and skepticism Vest noted that his visitor "was a much wiser, gentler and more evolved being than I - and with infinitely greater perceptive ability." Who was this unknown visitor, sent by a secret group to promote the first UFO contactees?

Bill´s very realistic explanation as to why they don´t show themselves openly in our world comes to my mind when viewing the present situation in Syria, Iraq, Lebanon, Mexico and many other countries: "Upon your earth the mere colour of one´s skin - a slight difference of religious belief - merely belonging to a different race or country - in fact the most trivial deviations precipitate animalistic belligerencies, hideous brutalities and the bloody slaughter of millions of your fellow creatures. Can you then truly be surprised when I tell you the the beings of certain other worlds view earth as earthlings might look upon a den of deadly serpents stinging each other to death."