In the extensive collection of books donated to AFU by Hilary Evans I found a first edition (1903) of The Other Side of Death by Theosophist Charles Leadbeater. A comprehensive study of various types of paranormal phenomena. To my surprise there was also an original letter by Charles Leadbeater, written on January 6, 1909, put between the pages and probably forgotten by the recipient. The letter proved to be of special significance from a ufological perspective as it concerns the possibility of a medium visiting other planets. Mr. Leadbeater writes: "You may take it that it is quite impossible that your mediums should have visited other planets, though no doubt they quite honestly they think they did. Any non-human entities engaged would probably be nature-spirits." 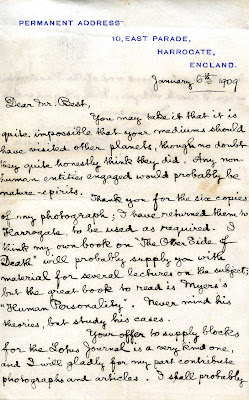 The comment by Leadbeater is interesting as it was written sixty years before Jacques Vallee´s classic Passport to Magonia. From folklore to Flying Saucers. What Leadbeater is trying to explain is that nature-spirits have the ability to deceive human beings into observing illusionary scenes and playing various other tricks on the mind. John Keel, with his theory of the deceptive ultraterrestrials, is probably smiling in his heaven if he happen to read this. In the first book from the pen of Charles Leadbeater, The Astral Plane (1895) he has this to say anent these entities: "Their forms are many and various, but most frequently human in shape and somewhat diminutive in size. Like almost all inhabitants of the astral plane, they are able to assume any appearance at will... Under ordinary conditions they are not visible to physical sight at all, but they have the power of making themselves so by materialization when they wish to be seen... in most cases when they come into contact with man they either show indifference or dislike, or else take an impish delight in deceiving him and playing childish tricks upon him." (p. 111-112, 2007 edition). 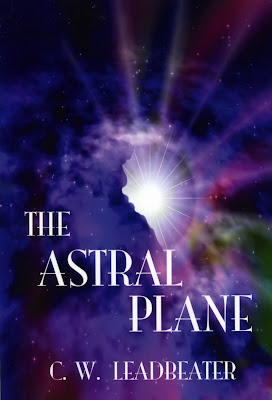 The nature-spirit explanation appears reasonable in the cases I mentioned in an earlier blog entry, but could this theory also be applied to another somewhat more complicated contact case? The percipient Jorge Z. was born in Honduras, 47 years old with a wife and four kids. On January 20, 2008 Jorge Z. is travelling in his car a few miles east of Norrtälje, north of Stockholm. Suddenly a bright light appears over the road and the wooded area. The light is a combination of yellow, white and blue and is moving quickly. Jorge assumes it could be a chopper. Suddenly there is a voice in his head ordering him to keep on driving. The voice is very clear: "move to the left", "continue". After a couple of miles Jorge enter a place called Norrtäljeviken and he parks the car. Standing beside the car he can hear a sound like a generator. Looking up he observeras a saucer shaped, silver coloured object with a light in the middle. Jorge becomes very frightened and says to himself: "A flying saucer. that´s not possible. God help me". 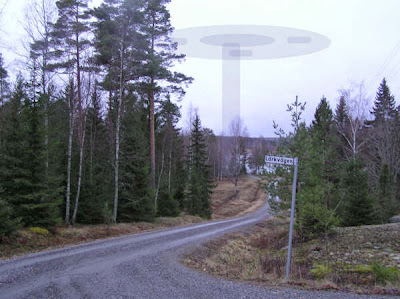 Photo and drawing by Jorge Z.

A light appears at the bottom om the object, shining down on the ground. In this beam an entity is floating down and start approaching the car. The entity makes a halt about 8-10 meters from Jorge and the beam is retracted into the object. Jorge tries to run but he is paralysed. The entity approaches and Jorge notice its large dark, oblique eyes. It is not more than 140-150 centimeter with a large head and long, skinny arms with four fingers. No nose, only two small holes and no ears. The entity is completely naked, hairless and lacking genitals. Jorge compared the feet to that of a duck.

"Don´t be afraid, I will not hurt you", says the entity and put his "hand" on Jorge´s shoulder. The hand feels exceptionally hard.” A short conversation ensues:
Miguel: My God, who are you? A god or an angel?
Entity: "We are neither Gods nor angels. My name is Horos and I come from Reticulum 4, a planet very far from earth. A long time ago you were chosen for this contact. Some of your ancestors were in contact with us and now is the time to bring a message to humanity. You can´t reach all the world but many people. There are already people who have been prepared to help you and with their help you will deliver the message."

Jorge ask if he can touch the entity? Horos says yes and Jorge touches his arm which is warm and feels like hard flesh without a skeleton. After about twenty minutes Jorge is ordered to come back the next day at three p.m. The object appears again and the entity is lifted up in the beam. The object disappears very quick, like turning of a light. 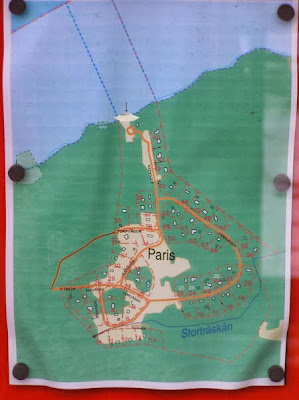 Map of the area

When Jorge arrives at home he is very upset and find it difficult to sleep. On January 21 he return to the same spot. This time an object comes up out of the water in Norrtäljeviken. Three entities leave the object to meet Jorge. Besides Horos there is now Ziros and Andrak. They want to help earth humanity and claim there soon will be an open contact. Jorge is requested to contact church leaders to explain that they are here. After a rather long conversation the three entities board the object again and it disappears in the water. 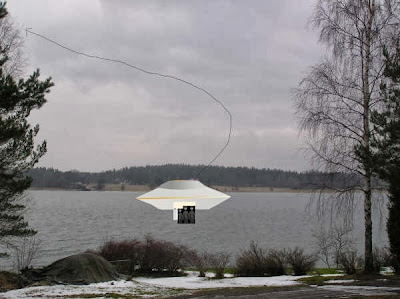 Jorge contacts UFO-Sweden and on February 3, 2008 I make a short interview on the phone. He is nervous, upset and don´t know how to handle the situation. Later I receive a short written report and drawings of his experiences. We communicate a few times by phone and mail and suddenly I receive the last email saying that he has left for the United States. After this I have not been able to trace Jorge.

So what do have here, given the story is genuine? Cosmic jokers, deceiving nature-spirits, elementals, biological robots created by a superior technology, alien visitors? Jorge appeared sincere but confused and he was very glad I took the time to listen to what he had to say. Unfortunately I never had a chance to follow up the case and visit him for a thorough documentation. Maybe he is now spreading the message of Horos somewhere in the world.