During a recent visit to the Swedish seaport Karlskrona, Susanne and I enjoyed the sunshine but also, as usual, tried to find the local antiquarian bookshops. And we were lucky as, in spite of summertime, Lyckeby antikvariat was open. We spent more than an hour perusing the shelves and found several interesting volumes. I bought a nicely illustrated book on Tibetan art by L. Jisl, V. Sis and J. Vanis. The Swedish edition, Tibetansk konst, was published in 1958. 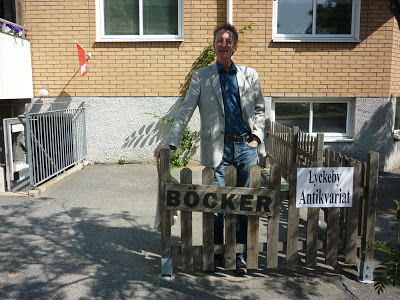 A bookworm outside the antiquarian bookshop in Karlskrona 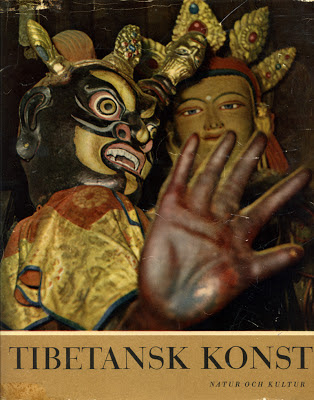 The last couple of weeks I have spent some time trying to find more data on a Tibetan mystery. In his book Försvunnen teknik (Lost engineering) (1961) author and aircraft engineer Henry Kjelsson (1891-1962) mention the Swedish physician "Jarl" who claims to have taken a film i Tibet showing monks lifting heavy blocks of stone with the help of sound waves. Clas Svahn checked this story and interviewed the widow of Jarl and according to her and other sources her husband had a very lively imagination and was something of a mythmaker. So there are grave doubts about this story. 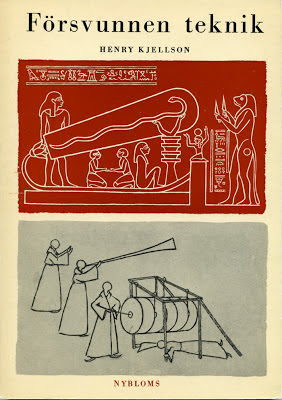 But Henry Kjelsson also, in his book, mentions another man with similar claims, Dr. Rudolf von Linauer, whom he met at Linauer´s lecture at The International Club in Stockholm, September 1939. According to Kjelsson Linauer had, while working for Metro-Goldwyn in China, been accepted into a secret society and as a result of these contacts could visit Tibet. There he was allowed to view Tibetan monks lifting giant blocks of stone using sound waves from various instruments.

As there are serious doubts about the authenticity of the story given by Jarl I decided to do some research on Rudolf von Linauer. A search on the internet revealed surprisingly few details. He is the author of Solens rike, a book about the spiritual message in Chinese art, published in Sweden 1939. According to bibliographical information in the Swedish catalogue Libris this is a translation from German (Das Reich der Sonne) but I have found no data on this book. My copy of the Swedish edition is autographed by Linauer and translated in Swedish by Mrs Elsbeth Funch, author and globetrotter. During Linauer´s visit to Sweden in 1939 he visited the home of Mrs Funch to study her collections of Chinese art. 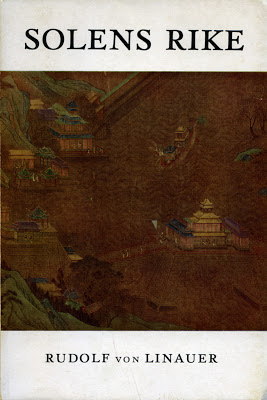 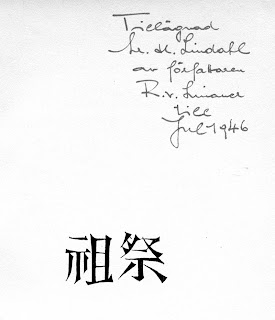 An internet search reveals that Linauer wrote a short manuscript included in My Life in Germany Before and After January 30, 1933. This manuscript is preserved at the Manuscript Collection at Houghton Library, Harvard University. These biographical data are presented:
"Linauer, Rudolf von; 33, b: Trieste; Catholic, divorced; architect; last German residence: Berlin, 1940; Tystberga/Sweden.
A widely travelled architect, the author expresses his astonishment and disgust towards the Nazi movement after returning to Germany in 1934-1935. In a loosely structured, impressionistic manuscript entitled "Inquisition Berlin Alexanderplatz", he describes the process of Nazi takeover and how people around him make their peace with the new regime. Most of the manuscript is taken up with his description of his sudden arrest and incarceration in a concentration camp... 48 pp. typescript".

In Ancestry I found that Rudolf von Linauer moved to California in 1956 and changed his name to Roy Rulin. But this is all I have been able to find on the internet so I wrote to several of the largest archives and libraries in Germany, Austria, including Trieste but very few of these institutions found any data on Linauer, which is quite surprising as they searched in databases, reference- and biographical books. I did receive some new data though from Biblioteca Civica Attilio Hortis in Trieste: "Rudolf von Linauer was born in Trieste, November 2, 1907 and was the illegitimate son of Guiseppina von Linauer (daughter of Teresa) who lived in Trieste in via G. Gozzi 3. Rudolf was baptized in the month of January 1908 in the church of St. Antonio Taumaturgo."

But the most interesting information regarding Linauer´s experiences in Tibet was found in an article he wrote for the Swedish daily Stockholms-Tidningen, September 17, 1939. I ordered a copy of this article from the National Library of Sweden. It was printed in the Sunday supplement and well illustrated. This article is probably a written version of his lecture at The International Club in Stockholm. Here is a very short summary of his Tibetan adventure. 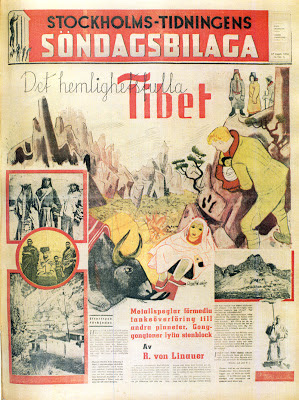 During his travels in Tibet he met two monks who brought him to a remote monastery where are preserved secret and sacred scripts engraved on blue metal, halv a million years old and also metals and instruments unknown to man. Linauer claims to have brought a piece of one metal to a laboratory in England and they could not identify it. He also witnessed a large gong 13 meters in diameter. For several hundred years this monastery has only been visited by eight foreigners. The monks are preparing a mission to present the ancient wisdom to the world. A philosophy (religion) "without fanaticism, hierachy and ignorance".

During his stay Linauer is allowed to follow the monks to another monastery where he spends nine month of study. It is at this place he becomes a witness to the lifting of heavy stones with the help of sound. One day monks are stationed around the monastery to keep all strangers away. Large metal shields are placed in a certain geometrical position together with a gong of three meters in diameter, made of three different metals. Monks are nude with only shields of metal on their bodies. They strike the gong which gives a thunderous sound. The monks can now carry large blocks of stone as if they were made a paper and build the new structure very easily. Linauer tries this himself and is surprised to be able to lift a massive stone without effort.  After about three hours two hundred stones have been set in place. Linauer gets a headache and palpitation of the sound and some of the monks must be carried to rest because of the deep concentration involved in the work.

This is what I have been able to document regarding the fascinating experiences of Rudolf von Linauer. Whether his story is true or fiction is an open question. Hopefully more data can be discovered by others involved in similar types of research.
Posted by Håkan Blomqvist at Sunday, July 07, 2013