For many years I have been collecting owl figurines of various types and material. I became fascinated by these unusual birds symbolizing both wisdom, magic and mysticism and my collection now comprises something like 60+ owls. But it was not until the last couple of years that I became aware of the connection between UFO sightings and owls. There are now several internet sites dedicated to investigating and documenting this connection. Part of my collection 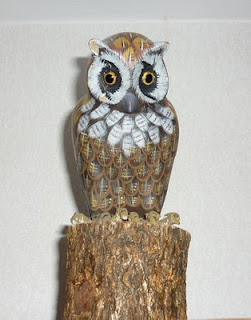 One of my favourites

According to tradition owls are associated with shape-shifting. In the AFU clippings archive I found a very unusual humanoid report possibly involving this phenomenon. It was printed in the Swedish daily Smålands-Posten, August 8, 1987 and the observation occurred in the summer of 1980, not far from Blomstermåla in the Swedish province Småland. The headline has the spectacular claim " I saw the devil". 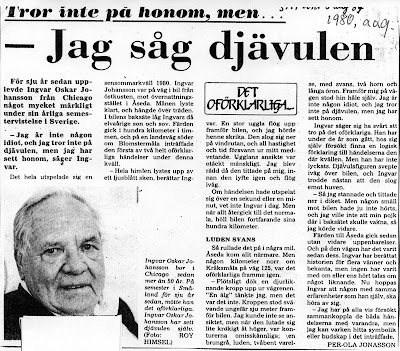 In the late summer of 1980 Swedish-American Ingvar Oskar Johansson from Chicago is on holiday in Sweden. This evening he is travelling by car from the Eastern coast to Åseda. In the back seat his eleven year old son is sleeping. A beautiful moon is shining over the trees. Not far from Blomstermåla the sky is suddenly lighted up with a blue light and a large owl appears in front of the car. Ingvar can hear its cry as the owl lands on the windscreen. The face of the owl appears very human and this scares Ingvar as he feels like the owl is looking at him. After a few moments it lifts and disappears.

After travelling a couple of miles Ingvar has his next experience with the unknown. Not far from Kråksmåla he notice what he first believes is an animal coming up from the side of the road. This creature is floating up in the air in front of the car. Ingvar can´t see its face but it is covered with brown hair, has two legs, a tail, two horns and long ears. The creature floats just above the car and Ingvar is afraid its been hit so he stops and takes a look around but find no trace of, whatever he saw. The rest of the journey is quiet. After this event Ingvar has talked to relatives and friends in Småland but no one has experienced anything like this.

In the UFO-Sweden report archive I found another observation involving an owl and UFO. In the summer of 1966 two young men are travelling by moped to Sörbo in the Swedish province Dalarna. Time is around 22 PM. They take a short brake to pee and then discoveres an owl sitting on a post beside the road. But looking up they also notice something else. A large silver coloured craft hanging in the sky about 150 meters above the ground. They don´t mention the shape of the craft but it is surrounded by a strange light. The craft moves slowly across the nearby fields and now and then emits flashes of light. The boys decides to follow the craft and soon observere it landing in a field. When on the ground it appears to be surrounded by some sort of fog. Light is coming from what could be windows and the boys notice movements by what appears to be figures in the fog and light. When the boys try to get a closer look the craft leaves the ground and accelerates with very high speed, at the same time producing flashes of light.

This just a sample of Swedish cases involving owls and UFOs. There are probably several more in the archive. I know of one more case but the connection between the owls and UFO is not so clear in this observation. A deeper study in the Swedish folklore archives on owls could probably yield more data.
Posted by Håkan Blomqvist at Saturday, July 20, 2013