The Corona pandemic has certainly restricted the life and activities for everyone on this planet. The UFO-Sweden 50 years anniversary has been postponed until Autumn and all meetings and social gatherings have been cancelled. We are all more or less quarantined in our homes. No big problem for an introverted, retired librarian like me, but a melancholy blues for most people. To cheer up and give some consolation to, especially Swedish, ufologists in these troubled times, join me in a memorable journey in time to the UFO-Sweden annual meeting 2010. 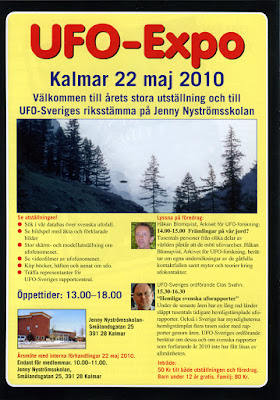 This year we celebrated the UFO-Sweden 40 years anniversary and my book on the history of UFO-Sweden was published. The annual meetings are arranged in different cities and 2010 we had chosen the charming, old city Kalmar, situated in the southern east coast of Sweden. 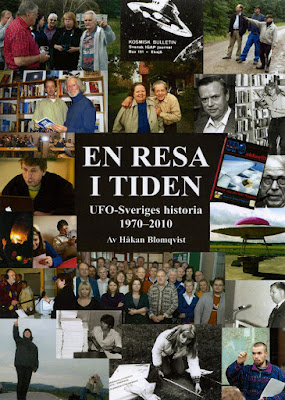 The date for the annual meeting 2010 was Saturday, May 22, but already on Friday everything had to be packed and transported to Kalmar. Mats Nilsson and Håkan Estrand had a tough job cramming old and heavy computers, models and exhibition screens into a cart. Clas Svahn picked me up by car at Norrköping and we joined the UFO-Sweden board and members at the Jenny Nyström School in Kalmar, to build the exhibition and check all facilities. After a couple of hours heavy work the UFO-Sweden gang checked in at First Hotel Witt for some rest and later dinner. 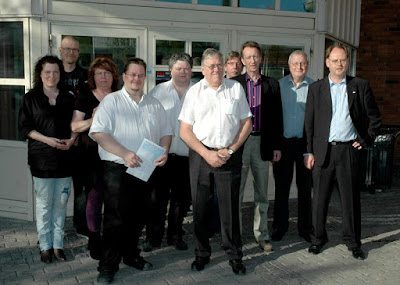 The UFO-Sweden gang at the Jenny Nyström School, Kalmar 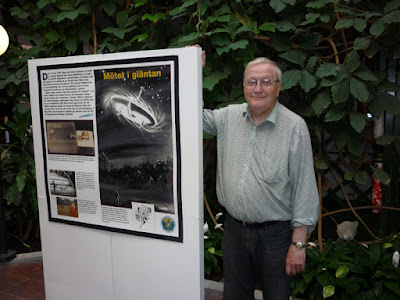 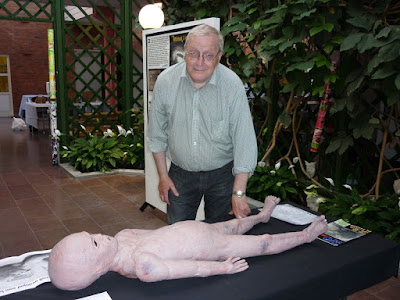 Joining UFO-Sweden can be quite an experience in several ways. New active  members Anders Berglund and Amanda Fredriksson soon became a couple in the organization and today they are married and have three children. 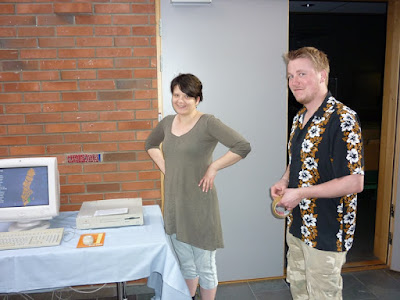 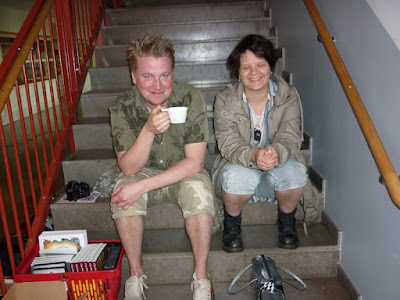 By ten o´clock on Saturday 19 members from 9 local units gathered for the annual meeting, where Clas Svahn was re-elected as UFO-Sweden chairman. Saturday started with wonderful sunshine and 25 degrees Celsius, making us all wonder whether there would be any visitors at the public lectures and exhibition. We feared the worst when no one had showed up just before Expo opening at one o´clock. But soon people started coming and some 80+ tickets were sold during the day. 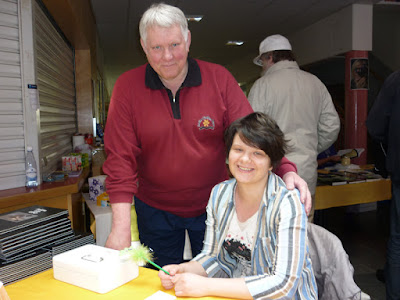 Clas Svahn and I lectured during the expo. My talk was called Aliens on Earth, presenting results from many years of study of the contactee enigma. Clas lectured on Secret Swedish UFO reports, giving insights into his extensive research of the formerly classified Swedish reports in military archives. Both lectures were well attended with many questions and signing of books. It is always fascinating to mingle with Expo visitors to hear comments and often also receiving new data on UFO observations. The ”close encounter” at the annual expo is an excellent way to get new cases for investigation. 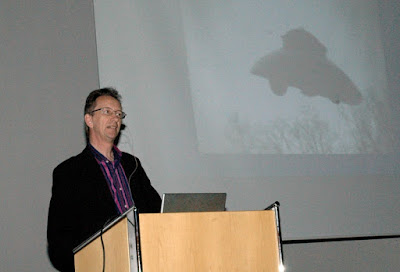 Lecturing on the contactee enigma 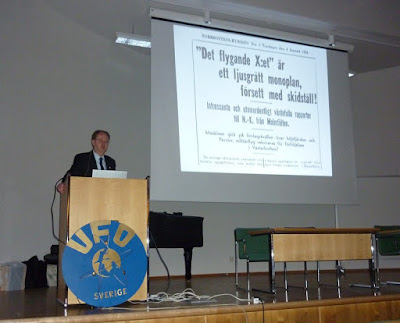 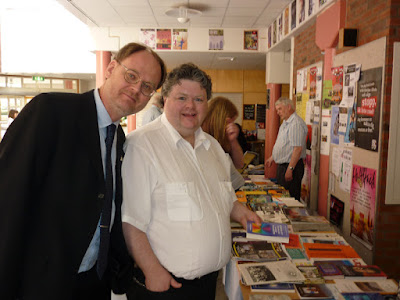 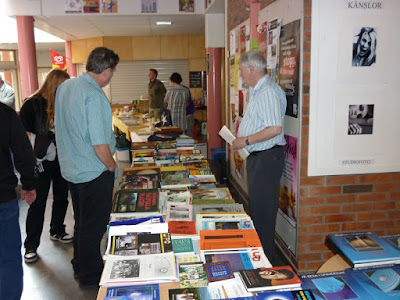 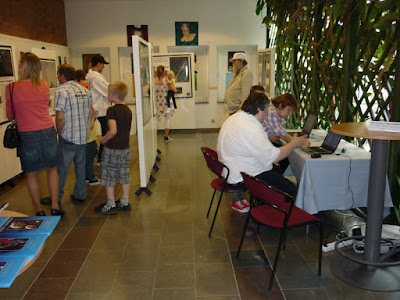 Around six o´clock it was time to dismantle the exhibition and loading everything in the transport cart. After some rest at the hotel it was time for the traditional UFO-Sweden dinner. This time at the Italian Ernesto Ristorante. As usual the dinner was excellent and the UFO-Sweden gang left happy and pleased for a stroll to the hotel in the warm Spring evening. 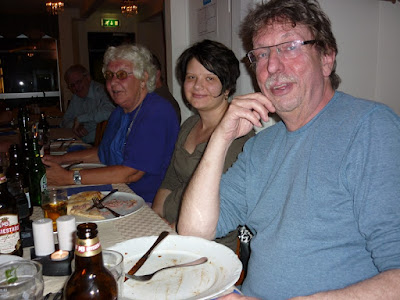 Håkan Ekstrand, Amanda Fredriksson and Tora Greve at the restaurant 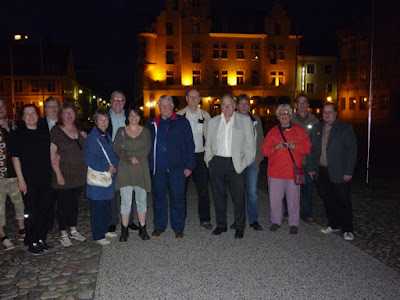 The UFO-Sweden gang strolling to the hotel after dinner

At the hotel we gathered in one of the rooms for chatting and socializing. By a funny coincidence Mats Nilsson and Gunnar Karlsson had been placed in a very large hotel room, actually the wedding suite. This proved to be a perfect place for our late socializing and small talk. Clas Svahn played famous songs and music on his lap top and everybody had a real good time. 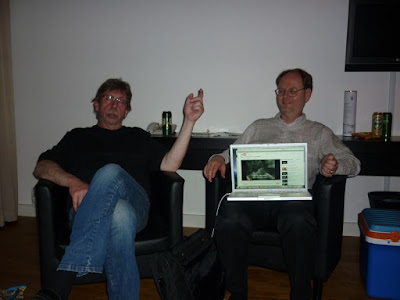 Håkan Ekstrand and Clas Svahn at the hotel room 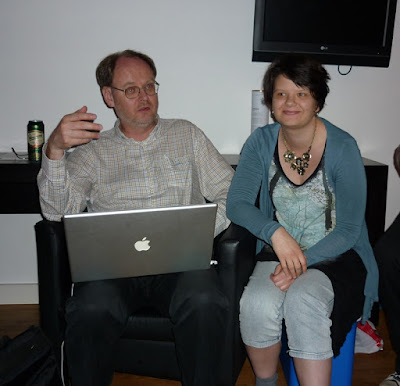 Mats Nilsson sometimes has a tendency to fall asleep during these late night sessions. Same proceedure this year. When he woke up the room was empty and Gunnar Karlsson was sleeping peacefully. It was time for Mats to go to bed - for real this time. 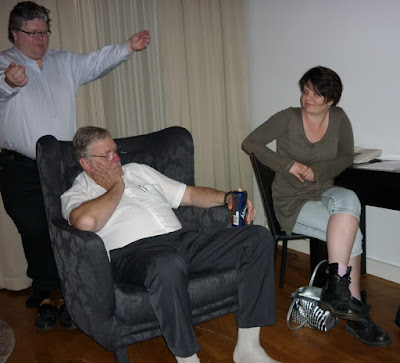 After a good breakfast Sunday morning we said goodbye to the gang who now travelled home to different cities. Clas Svahn and I made stop at Oskarhamn where oldtime UFO-Sweden member Roger Ersson donated five large boxes of UFO documents to be transported to AFU. All in all a very sucessful and enjoyable annual meeting and expo to be filed as happy UFO-Sweden memories. 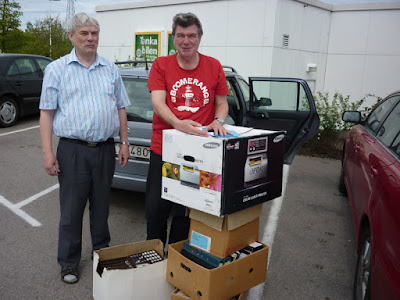