The Dark Vision of Don Worley

”The lone isolated researcher who knows so much of this sort of thing and really cannot communicate it to his fellow citizens, tends to examine himself and wonder if he is really normal or just a stupid believer of colossal lies… Some categories of the unknown and secretive-lie modus operandi seems to be amply identified and described in the Holy Bible. We earthlings are under assault as never before and at this late date we don´t even know it. Our enemy is making great progress on all fronts. For instance just one area – the moral and physical destruction of our most precious resource (our youth) via mind altering drugs and weeds has now reached frightening proportions.” 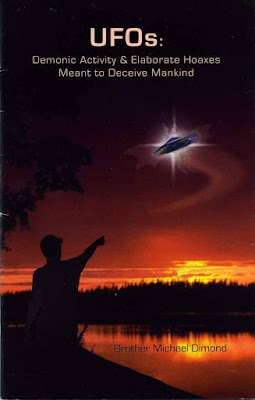 This was the dystopian vision and conclusion reached by American ufologist Donald (Don) Worley, presented in his first letter to me on March 19, 1981. We continued corresponding until 1995 and Don, very generously, provided me with lots of data and documents from his many years of field investigations. John Keel very aptly described Don as ”an experienced student of the unknown” (The Mothman Prophecies, p. 34). He began his studies of UFO and paranormal phenomena in 1965, being a member of NICAP and APRO. At the CUFOS conference in 1976 Don Worley was invited to present a paper on the relation between UFOs, Bigfoot and paranormal phenomena, titled The UFO-Related Antropoids: An Important New Opportunity for Investigator-Researchers With Courage.

To enter the controversial and possibly dangerous underground world of contactees, abductions, cattle mutilations and Men In Black (MIB) certainly requires a form a courage. This was the specialized area of research of both John Keel and Don Worley. In a certain sense they also arrived at similar conclusions regarding the intelligences behind the phenomena, although expressed in different terms. Keel used the more esoteric name elementals, while Worley preferred a mainstream Christian interpretation of good and evil - angels and demons.

Don Worley (1921- 2018) was born and lived in Connersville, Indiana most of his life. He was a member of Baptist Temple and American Legion Post No. 1. Employed at Boeing Aircraft in Seattle and at Roots Blowers for 31 years. After graduation in 1941, he served in the U.S. Coast Guard for 3 and a ½ years. On a Patrol Frigate, he was a radioman operating U boat detection equipment in the North Atlantic, south of Greenland. His active UFO interest and field investigations began in 1965 resulting in many articles, lectures, radio and TV appearances. Several of his articles can be found on the abduct.com website. 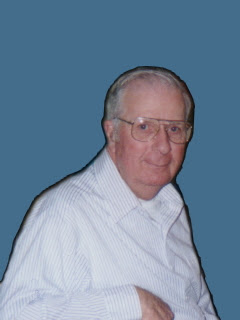 Reading the articles by Don Worley is to be catapulted into a world of sinister forces and entities. Although he did consider the possibility of benevolent alien visitors his many articles on the Nordics mostly imply dubious or evil intentions behind their activities. This is clearly stated in one of his later articles The Nordics Mystery (Contact Forum, March-April 1995): ”Are these ”love-exuding” entities – who are directing the lawless, invasive deeds of the greys and other types – simply greys in ”sheep´s clothing”?... Are the Nordics good, evil or indifferent?At this time it seems to me, we remain baffled and suspicious, yet hopeful.”

The mystery and possible threat from the Nordics, human-looking aliens, was a central theme in many of Don Worley´s articles. He was very serious about this issue and for several years engaged in a sort of mission impossible agenda to alert all he could reach of his findings: ”I have tried to ”wake up” congressmen, senators, (they contact the Pentagon which sooths with the usual lies, newsmen, national editorial writers, national TV commentators etc. Actually its just like World War Two. The escaping Jews returned to the gehettos and tried to tell everyone that the Germans were liquidating them by the millions but the monstrousness of the truth was unimaginable to the human mind and could not be accepted. After 22 years I have come to believe that the situation is really that grim. We don´t comprehend the primordial mind, know what it has done and is doing or what its final aim is.”
(Undated letter from Don Worley 1988). 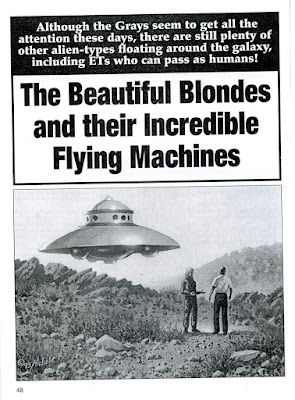 In a letter May 28, 1985 Don Worley told me he was working on the manuscript for a book with twelve chapters, cases and documents from his many field investigations. The title was UFO Ground Phenomena: The Visible Evidence of Earth´s Hidden Nemesis. Some of the chapters were The Hidden Deceivers at Work; Analysing the Hidden Enemy; Looking for a Savior. In the last letter to me November 1, 1995 Don had changed the title to Starships of Evil, reflecting his increasingly dystopian vision. The book was never published and I don´t know what happened to the manuscript or his archive. 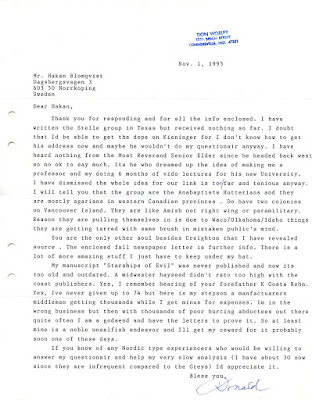 Don published many articles in Flying Saucer Review (FSR), during the editorship of Gordon Creighton. He shared Worley´s doom and gloom estimation of mankind´s situation, although he favored an anthroposophical interpretation of the phenomena. A World Under Assault was published in Flying Saucer Review, Spring 1999: ”An epic, unseen, struggle has been raging for many years. Large intelligence groups in Earth´s leading nations and the valiant forces at their disposal are locked in a hopeless struggle with a foe whose power is unsurpassed. Sleeping humanity little suspects what lies in its perilous future. It is much like the falsely secure revellers on the doomed Titanic. If some miraculous help does not finally intervene it is probably that our cherished values and even we ourselves will be annihilated.”

There are several ufologists who, after a few years of field investigation, have reached the same conclusions as Don Worley regarding the intelligences behind the UFO phenomena. Some of them have completely abandoned ufology and joined more or less fundamentalist Christian churches or groups. But Don kept on researching the enigma although with his view of the situation he must have felt an increasing paranoia. This was somewhat reflected in a letter to me 1985: ”Here and there in ufology those who got into something big and got too close to the MIB sometimes end up exiting this life usually by the heart attack route. ”They” know about me of course , but I don´t think my book will be stopped. I believe there are forces protecting me that will not allow this to happen. Others like Keel, Dr. Vallee etc survived and seen their revelations published… It is amazing how the UFO situation may parallel just what the Bible has to say about good and evil. You said it was too bad I was such a pessimist. Facts are facts and I must stick to them but I do in a limited fashion cover the good guys (angels?) in my book. However its mostly about those in temporary control now – the great deceivers.”
(Letter from Don Worley, September 9, 1985).

One of the reasons Don Worley arrived at the conclusions above was that he relied rather heavily on claims made by abductees during hypnosis. Data obtained during hypnosis are exceedingly unreliable and must be confirmed by clear empirical or circumstantial evidence to have any value. In the 1980s many amateur psychologists and ufologists made a mess of the abduction phenomenon by using hypnosis with inadequate knowledge of the proceedings. Real and physical abduction do occur though but very few have been witnessesed by those not involved. The most well known is probably the Travis Walton abduction in 1975. Two abductions observed by independent witnesses are documented by Dr. Ardy Sixkiller Clarke in her book Sky People, pp. 124 and 286. 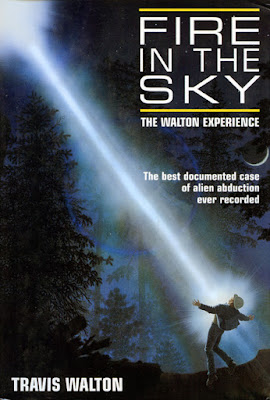 With Don Worley´s deep fascination with contactee cases (Nordics) I find it strange that he never made an indepth study of the classic contactees of the 1950s: Adamski, Angelucci, Fry, Menger, Van Tassel etc. Many were still alive and possible to interview in the 1960s and 70s. Such an investigation could have made him realize that here was evidence of activity by a benevolent groups of alien visitors and this could have made his theories more moderate and less gloomy. Don was also bound by his Christian paradigm or worldview. If he had studied and considered the core Esoteric Tradition (Blavatsky, Bailey, Laurency) as an alternative hypothesis or paradigm he would have found some interesting clues to the UFO enigma. But in this respect he was, like many other ufologists, what Meade Layner and Riley Crabb called a ”metaphysical illiterate”.

Still I can feel a certain sympathy with Don Worley as in some respects I share his views, based on my own investigations of contactee cases. There definitely are some very strange things going on on this planet and obviously we have both good and bad ”players” in this drama – whoever they are. Although evil or dangerous space people were often mentioned by the first generation contactees there are very few references to ”cosmic evil” in the core Esoteric Tradition. Of possible relevance is one cryptic reference by the Tibetan to Alice Bailey: ”… the place where another kind of evil dwells - an evil which is not indigenous to our planet, an evil with which it was never intended that men should deal.” (Alice Bailey, The Rays and the Initiations, p. 753). To mainstream scientific ufologists such ideas and scenarios are simply myths and irrational conspiracy theories. Now suppose you, as a researcher, would find absolute and one hundred percent personal proof that there really is a secret war going on for this planet, but you are unable to prove this publicly. What would you do? How would you react?

Here a few options:
1. Join the fight, hopefully on the side of the Angels.
2. Try the mission impossible option of going public with your knowledge.
3. Write a novel and in fictional form present what you know.
4. Document your knowledge and preserve it in a safe-deposit box, to be published after your death.
5. Forget the whole thing and try to live a normal life.
Posted by Håkan Blomqvist at Wednesday, December 04, 2019