The Doctor and the Alien

Since 1980 archivist Sven-Olov Svensson has with idealism and perseverance taken care of the day-to-day practical duties at AFU. But he is also, like myself, deeply fascinated by the contactee enigma and has for many years collected contactee cases in an international catalogue now comprising more than 700 entries between A.D. 800-2004. The sources are books and magazines but also correspondence with ufologists worldwide. Unfortunately Sven-Olov has no plans for including post-2004 encounters but the catalogue is a useful document because sources to each case is provided. Hopefully this catalogue can be made aviable as an AFU download. 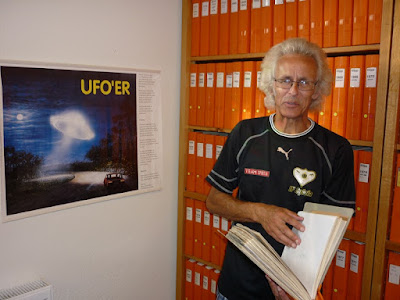 One of the more interesting letters received by Sven-Olov Svensson is from Dr. Leopoldo Diaz, Guadalajara, Mexico. The letter is dated October 26, 1984 and is a short account of the intriguing alien visitor examined by Dr. Diaz on November 28, 1976. What makes this case especially interesting in the annals of UFO history is that Dr. Diaz was briefed on his encounter at the U.N. 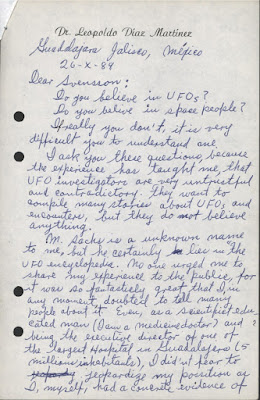 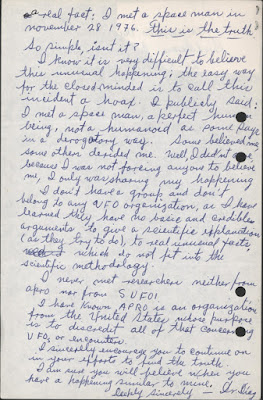 Dr. Diaz at first told no one of his experience but eventually he related the meeting to his family and some close friends. The pro-Adamski group UFO Education Center had a branch in Guadalajara and the story finally reached Charlotte Blob, director of the group with headquarters in Valley Center, USA. From then on the story became widely known. Michael Packer, a California radio newsman interviewed Dr. Diaz and there were many articles worldwide relating his encounter. 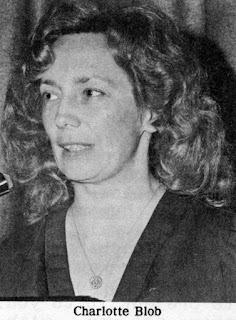 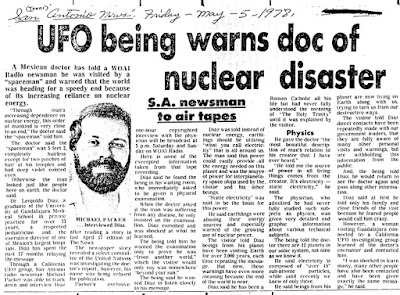 In June 1977 Dr. Diaz wrote a letter to the editor of Contactos Extraterrestres, describing what had happened:
”I am a general practitioner in the city of Guadalajara.  Well, then, on October 28, 1976, I attended to my patients as usual.  At 12 noon I was ready to finish, when the last patient came in, who attracted my attention very much.  It was a person about 50 years old, of very white skin, almost totally bald, grayish-blue eyes, a penetrating look, and of a genial nature.

I did not hear him when he entered the waiting room, but I saw him paging through a magazine when I opened the door to say good-bye to another patient.  When I looked at him he got up and I could see he was very short, about 1.50 m. [4’-11” -trans.].  With a high-pitched voice he told me, “I want you to give me a checkup”; I told him I would.  I proceeded with the checkup and was baffled by his perfect health; his vital signs and his reflexes were surprisingly normal.  He was hairless except for his face, where he had a very fine fuzz; on the rest of his body his skin was as smooth and delicate as that of a robust baby of six months.  Upon noting this to him, he told me, “I have always led a very healthy life, without any excesses, and have cultivated mental control for a long time I have not gone to the doctor for a long time.”

I almost fainted when I learned his age: 85 years!  He noticed my perplexity and told me, “I am not from here, and don’t ask me where I am from, because I can’t tell you.  My name is Llop Zarniet.  [In Spanish, the “ll,” a letter of its own, is pronounced like “y,” which is the more usual rendering of that sound. -trans.]  There are more planets in this solar system that have not yet been discovered; several such as I are distributed throughout the world trying to enter into contact with conscientious [or reliable] people who are disposed to help us make known our presence without causing any fear.  We want to help improve the general conditions of development on Earth and avoid the evils that can lead you to chaos.”
(Contactos Extraterrestres, no. 15, June 22, 1977 p. 5, translated by Richard Heiden). 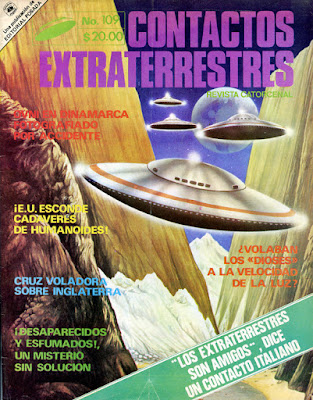 I am not aware of any detailed and published investigation of the this contact case but Timothy Good did a follow-up on the claim that Dr. Diaz had made a special trip to New York and related details of his encounter to a United Nations delegation. Timothy Good spoke with Dr. Diaz on the phone in 1980:
”… he struck me as being completely truthful, and gave me the names of some of the United Nations delegates with whom he had spoken in New York. The meeting had taken place in the office of Robert Muller, Under-Secretary of Economic and Social development, and accordingly I telephoned him at the U.N. Mr. Muller confirmed the meeting with Dr. Diaz, but when I asked what the U.N. proposed to do about it, he replied: ”Nothing – nothing at all. I circulated it to some people who might be able to do something about it and I had not a single response.” (Timothy Good, Alien Liaison, 1991, p. 76). 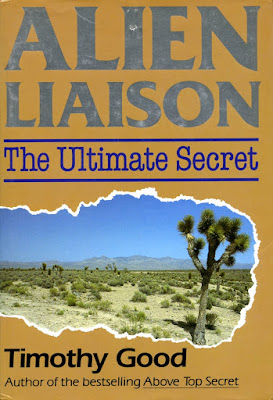 Ufologist Ramona Cortez wrote an article about the Dr. Diaz encounter in Beyond Reality 1979 and included some more data on the U.N. investigation: ”Bertrand Chatel, in charge of the Technology Applications Section at the United Nations, stated that he has met Dr. Diaz several times in secret sessions in New York City. ”We still need more investigations. It is the only UFO contact case we are probing. It is definitely unusual. It cannot be considered a major scientific event because we must have additional scientific evidence.” (Beyond Reality, no. 36, March-April 1979, p. 16).

In the same article Ramona Cortez mention an interesting comment by astronaut Gordon Cooper: ”I´ve known for some time that there has been high-level interest in the Mexican encounter. I am not surprised at Doctor Diaz´physical description of the being. It conforms  to previous encounters I´ve been told about.” What happened to the result of these investigations? Could they still be found in the U.N. archives?

What I find somewhat frustrating in this case is that there is no mention of Dr. Diaz taking a blood sample of the visitor and saving it for further study. This could have confirmed whether the alien had a physical organism like us or maybe a non-organic, materialized, body as has been mentioned in several other studies.

Wherever this alien visitor came from his message to Dr. Diaz` is certainly worth listening to: ”It is necessary that you people recognize that many of us are here intermingled with you, and trying to help, because you are very close to having tremendous problems on your planet… You are misusing energy sources and it is necessary for you to learn to find another source of energy. We are trying to give you this information because you are polluting the atmosphere: you are contaminating not only your planet bu teven space, and are very close to being destroyed…”. (Good, Alien Liaison, pp. 74-75).