Spanish visit and a classic saucer

Visitors to AFU are coming from near and far and we are always glad to welcome visitors from around the globe - and other globes - if they happen to be around. On Saturday, August 3, Luis R. González arrived from Malaga, Spain for a two weeks stay at Norrköping. He will be studying our Spanish files, especially the large collection we received from Centro de Estudios Interplanetarios (CEI) in May this year. Luis González is one of the participants of the EuroUfo.Net, the virtual community of European UFO researchers. 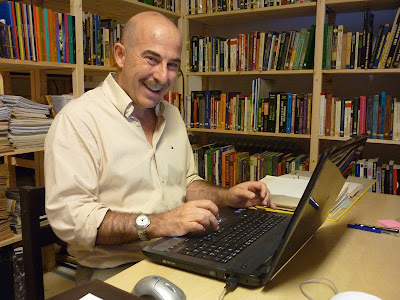 Luis Gonzales seems to enjoy his stay at AFU

AFU is supported by and attracting investigators and researchers from all shades of the ideological spectrum, believers, agnostics and skeptics. You are welcome to the archive whether you are a professional scholar or amateur, whether an Atheist, Humanist, Catholic, Buddhist, Theosophist, Spiritualist or whatever. Our only wish is that you have a serious interest in researching and studying our files and support our efforts. We collect data and material from all possible aspects of our subjects. At AFU you can find doctoral theses as well as new age and cult publications from all over the world. This ideological stance makes us a unique repository for everything involving UFOs, Forteana, folklore, paranormal phenomena, Esoterica etc. Our aim is to develope AFU as a world inheritance, although we will probably not be recognized as such by UNESCO. Next month we hope to launch our new and very much updated AFU website. 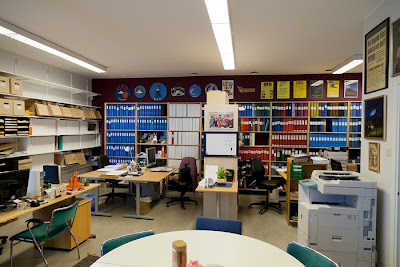 Although AFU is a an independent, nonprofit foundation we are associated with the Swedish national organization UFO-Sweden. The ideology of UFO-Sweden was brilliantly formulated by the former UFO-Sweden chairman, Clas Svahn, in the beginning of the 1990s. It has been labelled the third way ufology which implies neither sceptical denial nor naïve belief but critical investigation and documentation based on the best aviable empirical data. In my view this in the only scientifically and logically tenable position on the very controversial subjects we are dealing with and the safe middle ground to avoid rigid ideological dogmatism. We try to keep a reasonable open mind to various theories and assertions as we in many cases really have no idea what we are investigating. “If you know the answer beforehand, it isn´t research” (Allen Hynek).

As my blog, since april 2013, is written in English I now and then present UFO cases that have only been published in Swedish. Here is a classic flying saucer report that is still unresolved.

Björkvik is a small community situated in the southern part of the Swedish province of Södermanland. On October 11, 1994 I was invited to lecture on UFOs to adult students at Björkvik. After the lecture a woman in the audience told of an fascinating close encounter she and her daughter had in September 1989. The case sounded so interesting that my AFU collegue, Anders Liljegren, and I decided to do a thorough field investigation. 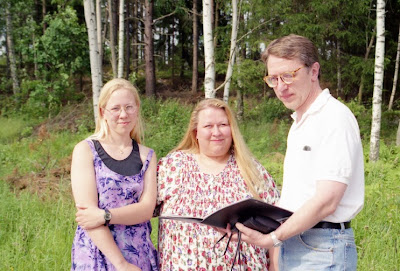 Anders Liljegren interviewing Tina and Kerstin at the observation site 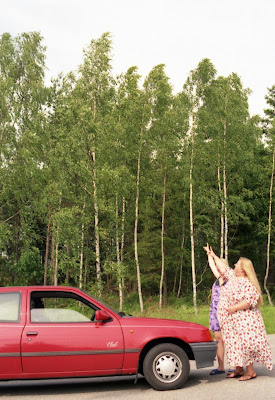 The object hovered above the trees

At 6.10 P.M. on September 9, 1989 Kerstin Jonsson and her daughter Tina are travelling by car not far from their home in Björkvik. They have just left Tina´s friend at the local bus station. Kerstin is driving and 13-year old Tina is sitting in the back seat. A couple of hundred meters from home Kerstin notice an object hovering above the trees beside the road. She tells her daughter and they drive very slow, closer until they are right below the strange object. Tina is afraid and wants to go home but Kerstin stops the car and roll down the car window. No other car show up and there is a strange silence all around. No sound is heard from the object. The shape is a classic saucer, about five meter i diameter and of dark metallic colour. Three lights are seen on the underside, blinking at regular intervals. Some form of hatch is also visible. Kerstin and Tina get a very god look at the object which is not more than 15-20 meters above them. 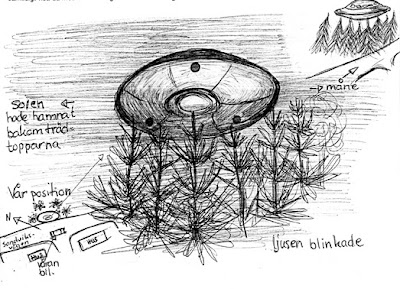 Kerstin wants to have a better look so she opens the car door and put one foot on the ground. But now Tina is very agitated, crying "you´re crazy, don´t go out". At the same time the object begins to spin counter clockwise and move out over the road. Kerstin can now see the object from the side. There is a dome on top with several windows from which comes a yellow light. The object makes a fast turn and disappears towards lake Yngaren. Kerstin and Tina drive home and Kerstin´s husband Sture notice that they are both very upset. 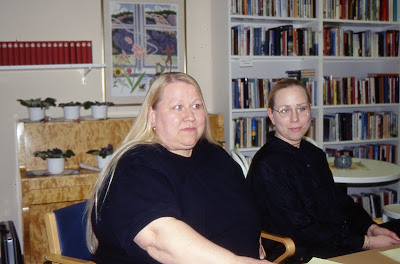 Anders Liljegren and I interviewed both witnesses separately and also the husband Sture. He is a skeptic but open minded to the possibility of UFOs. "They were very agitated when the arrived home. And Tina was absolutely terrified." Sture consider their story legitimate as neither his wife nor daughter use to fantasize. The frustrating aspect of this observation is that there are at least six more witnesses to this object, neighbors to the family, but they refuse to talk to us. But in july 2008 UFO-Sweden received an anonymous letter from one of the other witnesses. He was 16 years at the time and, together with his mother and sister, observerad the object over lake Yngaren. They travelled by car and noticed the object hovering over the lake. It was dark metallic and had lights blinking underneath. The object suddenly moved very fast and disappeared.

It is not very often we have close encounter cases with six or more witnesses observing an object from different positions. Hopefully the other witnesses will come forward so we can have a better documentation of this interesting report.