For a few weeks I have immersed myself in the fascinating diaries of Henry Steel Olcott, one of the founders and the first president of the Theosophical Society. His classic Old Diary Leaves in six volumes are a treasure trove of paranormal phenomena. I have often advised UFO collegues to study the writings of the first generation Theosophists and compare them with the contactee literature. Ufologists will be surprised to find the same type of phenomena in both genres. Theosophy is contactee experiences minus the saucers. And a good start is the first volume of Olcott´s Old Diary Leaves, covering the period 1874-1878. 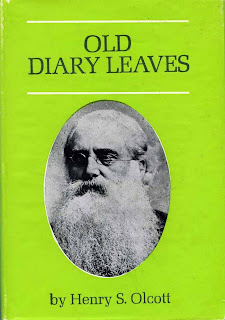 Henry Steel Olcott (1832-1907) was a lawyer, journalist and a pioneer in psychical research. He spent twelve weeks in 1874 investigating the materialization phenomena of the famous Eddy brothers in Chittenden, Vermont. This was eight years before the foundation of the Society for Psychical Research in London 1882. Olcott documented his research in a massive 492 pages opus, People From the Other World (1875). 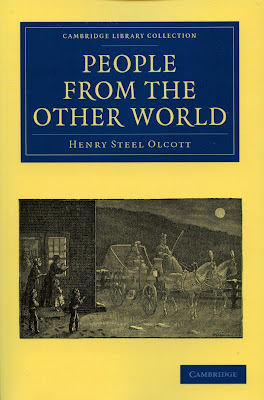 Present day Theosophists reading Old Diary Leaves will probably be both surprised and chocked by the often very critical comments on Helena Petrovna Blavatsky and her character in the diaries. This is definitely no hagiography of the famous H. P. B. as she liked to be called. Olcott is unusually candid regarding both her faults and merits. Listen to this quote on Blavatsky´s character, which one would rather expect from sceptical hardliners: "So fitful, so capricious, so unreliable, so exacting, so tempestuous as to call for heroic forbearance and self-control if one would live and work with her in an unselfish spirit". (p. 50) And Olcott gives several examples of these less admirable traits in his diary. Of course he also gives many examples of the very good sides of Blavatsky.

But what made this rather critical investigator of the paranormal endure living with Blavatsky and becoming her foremost co-worker? A large part of the answer is obviously - phenomena. His diaries are filled with all the various types of psychic experiences and phenomena he encountered both together with Blavatsky and alone. We can follow his thoughts and doubts about what is happening. But there was one particular early experience that was a sort of turning point in his Theosophical career. It occured in New York City 1877.

"Our evening’s work on Isis was finished, I had bade goodnight to HPB, retired to my own room, closed the door as usual, sat me down to read and smoke, and was soon absorbed in my book. All at once, as I read with my shoulder a little turned from the door, there came a gleam of something white in the right-hand corner of my right eye; I turned my head, dropped my book in astonishment, and saw towering above me in his great stature an Oriental clad in white garments, and wearing a head cloth or turban of amber-striped fabric, hand-embroidered in yellow floss silk. Long raven hair hung from under his turban to the shoulders; his black beard, parted vertically on the chin in the Rajput fashion, was twisted up at the ends and carried over the ears...the Presence was seated in the other chair beyond the table. He told me he had come at the crisis when I needed him, that my actions had brought me to this point, that it lay with me alone whether he and I should meet often in this life as co-workers for the good of mankind...Suddenly the thought came into my mind: "What if this be but hallucination; what if HPB has cast a hypnotic glamour over me? I wish I had some tangible object to prove to me that he has really been here, something that I might handle after he is gone!" The Master smiled kindly as if reading my thought, untwisted the fehta [turban] from his head, benignantly saluted me in farewell and was gone: his chair was empty; I was alone with my emotions! Not quite alone, though, for on the table lay the embroidered head cloth."

In his diaries Olcott relates how he later several times met this man in India, sometimes together with other members of the Theosophical Society. But it was this exceptional experience that made him decide to devote his life to Theosophy. To his very sceptical friend Mr. A.O. Hume he tried to explain his decision in a letter September 30th, 1881: "... I would never have taken anybody´s evidence to so astounding a claim as the existence of the Brothers, but required personal experience before I would head the new movement... I got that proof in due time".

The striking resemblance between these early experiences by the first generation Theosophists and the contact claims of George Van Tassel, Howard Menger, Orfeo Angelucci, Paul M. Vest and many others should in my view be further investigated. Very little research has been done in this direction. 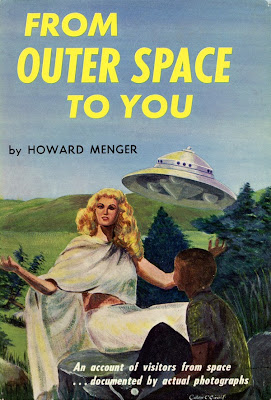