Who Is The Photographer?

In several blog posts I have commented on the three photographs of a bell-shaped craft allegedly taken by Tahahlita Fry in Merlin, Oregon on November 1968. These photos have been reproduced innumerable times in books and magazines, often with different dates and claims that they were actually taken by other people. In the Parthenon correspondence file at AFU we have original letter from Tahahlita Fry, describing how she took the photos. I have generally regarded all other claims as highly dubious. But recently a new source have appeared that deepens the mystery. 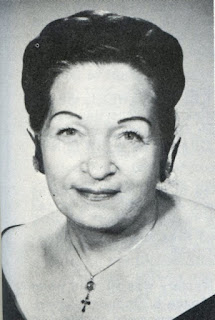 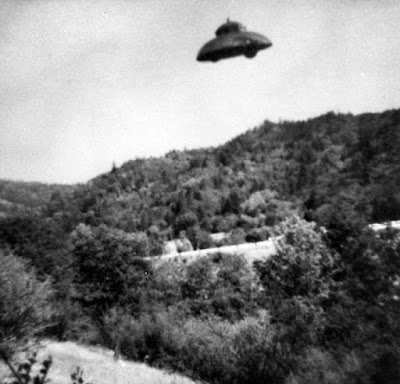 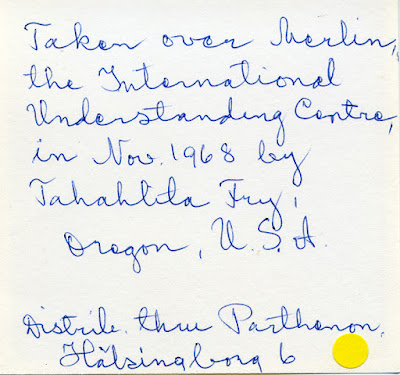 Info on backside of photo

In her letter June 2, 1969 to Edith Nicolaisen, Sweden, Tahahlita Fry, second wife of Daniel Fry, narrates how and when she took the photos in Merlin, Oregon, November 1968. Her friend Mrs. Wilma ”Billie” Thompson was also present on this occasion, but none of them observed the craft. They were surprised to find a bell-shaped craft on the pictures when the drug store had the roll developed. Tahahlita`s handwriting is rather difficult to read but with the help of Timothy Good I have made a reasonable interpretation. There is no exact date given in the letter and Edith Nicolaisen asked two times about this in their correspondence but Tahahlita never answered this question. Her comment that ”I have never seen one open before” is enigmatic. 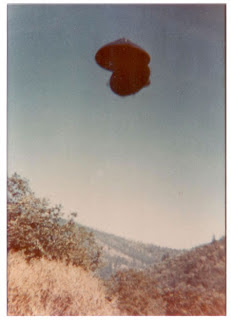 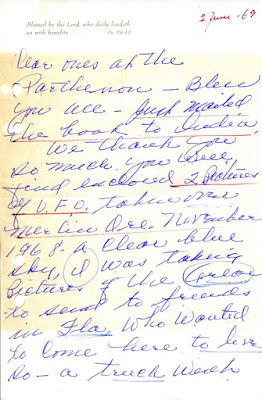 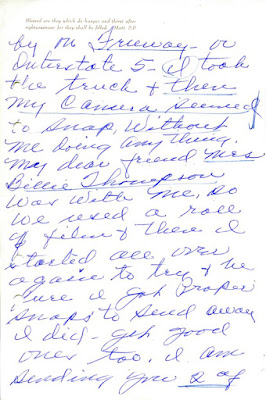 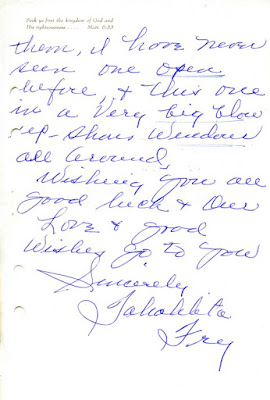 Dear ones at the Parthenon,
Bless you all. Just mailed the book to ………… We thank you so much. You will find enclosed two pictures of UFO taken over Merlin, Oregon November 1968. A clear blue sky. I was taking pictures of the parlor to send to friends in Florida who wanted to come here to live so – a truck went by our freeway – or interstate 5. I took the truck and then my camera seemed to snap without me doing any thing. My dear friend Mrs Billie Thompson was with me, so we used a roll of film and then I started all over again to try and be sure I got proper snapshots to send away. I did get good ones too. I am sending you 2 of them. I have never seen one open before. …. once in a very big glow…
Wishing you all good luck.
All love and good wishes go to you
Sincerely
Tahalita Fry 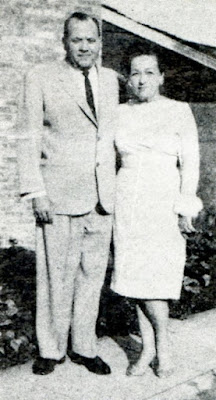 Edith Nicolaisen received two different photos but the craft appeared on three. Whether she received the third photo later I have not been able to find out but we have one copy at AFU. When Timothy Good visited Daniel Fry and his third wife Florence in 1976, Dan told that Tahahlita did not see the craft when she took the pictures. The camera started to click the shutter by itself six times. In a email to me February 6, 2012 Timothy Good mentioned this interview: As you know, I spent a lot of time with Dan and his second wife Florence when I stayed at his home in Arizona with Lou Zinstag in 1976, and he gave me two  large colour prints of that craft. I've just gone through our correspondence, and this is what Florence wrote to me on August 29, 1977: "About Tahalita's picture [sic] - Dan states that Tah did not see the ship and disclaimed the pictures when they were presented to her because she didn't recognize them. Finally one picture was of a mutual friend and she accepted the role [roll?] of them. The camera simply snapped itself six consecutive times and when the roll was developed there were the spaceship pictures. . ." Timothy Good sent me copies of the color prints he received from Daniel Fry. 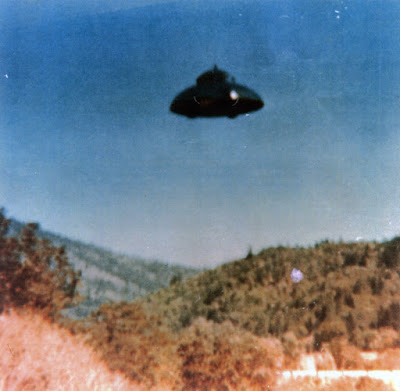 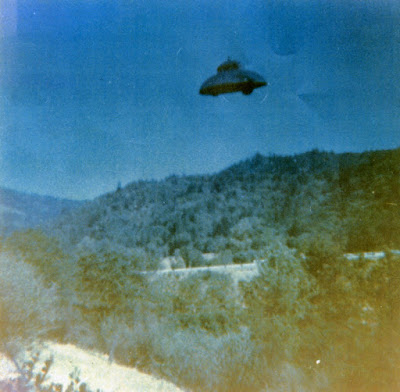 Timothy Good also sent me a copy from a magazine called Lotus Leaves, Feb-March 1974, with an interesting comment on the photo with the open section. Lotus Leaves was a newsletter published by the Lotus Ashram, Miami, Florida. This was a spiritualist fellowship headed by Dr. Noel Street and his wife Coleen. 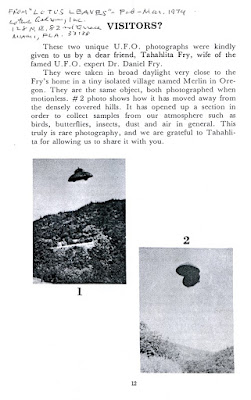 The Tahahlita photograhs were published in many books and magazines, often with differing and rather confusing data. George Van Tassel published one of the photos on the front page of his magazine Proceedings 1978, with this comment: ”This photograph was taken by Tahahlita Wiese, in September of 1969. She, and a friend, were standing on a hill taking photographs of her property downhill from where they were, near the Interstate 5, Merlin, Oregon interchange. We reprint the picture here with the permission of Mrs. Wiese.” Both the month and year are here incorrect. Tahahlita had married Mr. Harold Wiese around 1970. 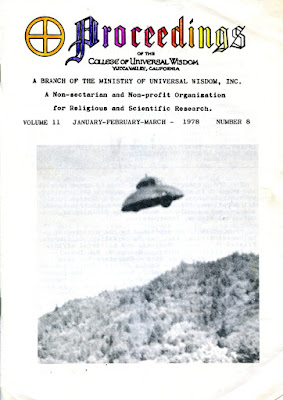 Some further interesting data are presented in a short note in the magazine UFO Universe, vol. 1, no 2, September 1988. But as usual the month and year is incorrect, stating September 1972. Very interesting though is the statement that Tahahlita  heard a ”peculiar humming sound in the sky. We are also informed that the camera was a Yashica and that negatives exist. I asked Sean Donovan, custodian of the Understanding archive if he had these negatives but they were not to be found among the archive he has salvaged, and now present on his excellent website.

Anyone searching the internet for information on the Tahalita photos will soon find the assertion that they were actually taken by an engineer named Fritz Van Nest on March 21, 1968. The location is given as eight miles south of Kanab, Utah. The first ufologist to make this statement, from what I have found, is Wendelle Stevens in the article Bell-Shaped UFOs, published in Official UFO, vol 1, no 4, November 1975. Stevens gives a very detailed report of the incident, appearently from a first hand source. Rather sensational is the claim that Fritz Van Nest was a working colleague with famous UFO Skeptic Dr. Donald Menzel. I corresponded with Wendelle Steven 1981-1991 but unfortunately never asked him about these photos. 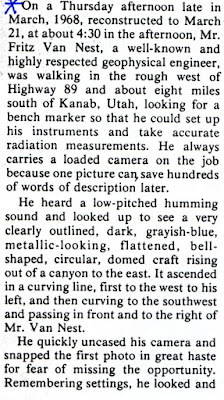 On July 30, 2008 a man calling himself TruthSeeker wrote a short note on the Daniel Fry website. According to TruthSeeker Tahalita Fry took the photos but they were ”stolen by her real estate agent, Fritz Van Nest, who later made several attempts to profit from the photos. I was surprised to find that on the same website the daughter of Fritz Van Nest (Alix Van Nest) disputed this claim: ”My father is Fritz Van Nest. That is ridiculous that my father stole any picture from anyone. I personally have the original picture in my possession. I´ve had it since I was a little girl. He always told me it was real, and after returning home after seeing that thing there was always a telescope up looking at the sky. To say he tried to profit from the photo is offensive, he was a scientist, never a real estate agent. I´ve never heard of the person who you credit that the photo was stolen from.And since I have the original I think you had better research your sources before you slander my fathers name.”

In an effort to resolve this enigma of opposing statements I wrote an email to Alix Van Nest on January 12 this year, but so far no answer. Neither have I been able to find specific data on Fritz Van Nest. If he was a ”well-known and highly respected geophysical engineer”, according to Wendelle Stevens, there ought to be some information of his life and career on the internet.

Adding to the confusion on this issue is the website of Neil Slade who claim this his friend Henry Rowland from Denver received the photo in the 1970s from a client for whom he was doing landscape work in California. The photo had been taken by his brother. And the list of people who are said to be the photographer goes on and on. So far the earliest data on these photos comes from the personal letter from Tahalita Fry. Perhaps some of my research colleagues out there have more first-hand data that can possibly solve this complicated photo enigma?
Posted by Håkan Blomqvist at Sunday, February 03, 2019