During the last two years I have devoted many hours reviewing, organising and scanning the vast archive of Borderland Sciences Research Foundation (BSRF). The major part of this collection is now filed in alphabetical folders at AFU. Next in line of large-scale projects is the Parthenon archive. This unique collection was donated to AFU already in the 1980s but has unfortunately been somewhat neglected in favor of other projects. This archive is a treasure trove of hard to find information about organizations, personalities and debates during the first decades of the UFO movement, especially the contactee scene. 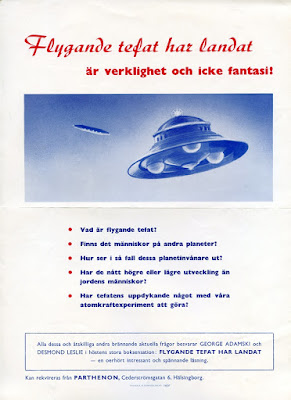 Early information sheet from Parthenon, announcing the publication of the Swedish edition of Flying Saucers Have Landed in 1957

What makes the Parthenon archive so internationally unique can to a large extent be attributed to the dedicated work of one remarkable woman, Edith Nicolaisen (1911-1986), founder of  the Parthenon publishing house in 1957. She spent eight years studying at the universitities of Copenhagen, Paris, Berlin and Heidelberg. Her academic credentials are impressive: Modern languages such as English, German, French, Latin, Russian but also Philosophy, History, Science, Mathematics a.o. 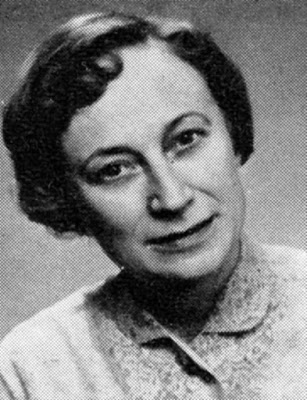 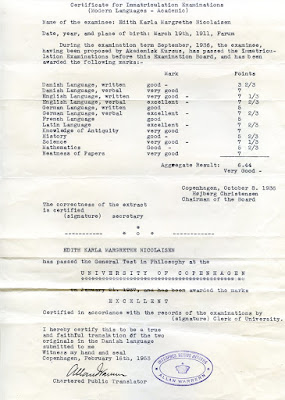 Fluent in several modern languages she worked as a translator, after the Second World War, for the United States Armed Forces in the European Theater and also in the Civil Censorship Division. Always with excellent ratings in work and personal qualifications. Between 1953-1957 she worked as a saleswoman for the Swedish publishing company Diana Bildreportage AB, Hälsingborg. 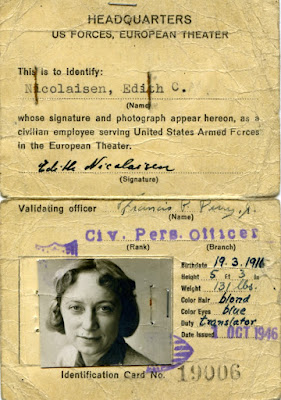 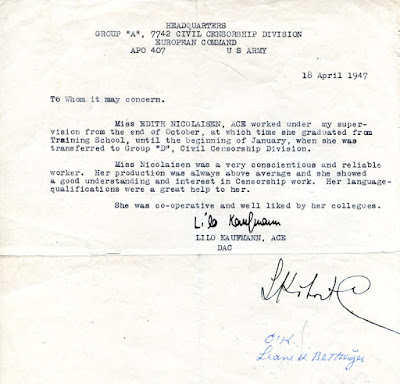 The prime heureka moment in the life of Edith Nicolaisen happened in 1954. An event she described in a letter to contactee Basil van den Berg, South Africa, September 1, 1963: ” "The first book I read was that of Leslie-Adamski´s Flying Saucers Have Landed and something in me recognized the truth, however fantastic it all sounded to my intellect and narrow-minded teaching, we all have received. I am a Danish citizen, who in 1954 was faced with the difficult choice either to accept the doors suddenly flung open for an additional three years college-training in USA for a future career under WHO Geneve... or, to volunteer for the SAUCER-cause here in Sweden, which meant to chose the "thorny and stony" road of the lonesome pioneer. After a fierce fight between intellect and heart, the latter gained supremacy."

As a long-time student of the Esoteric Tradition Edith Nicolaisen became convinced of the deep spiritual and cultural significance of the coming of the flying saucer phenomenon and the messages presented by contactees such as George Adamski, Daniel Fry, Orfeo Angelucci etc. Between 1959-1969 she corresponded with BSRF director Riley Crabb. In an article published in Round Robin 1960 she detailed her vision of Parthenon. In a letter 1969 Riley Crabb gave Edith Nicolaisen credit as a server of the Light in Sweden. 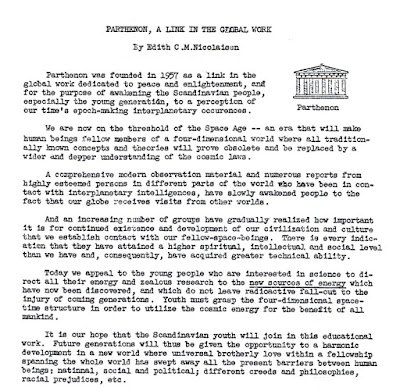 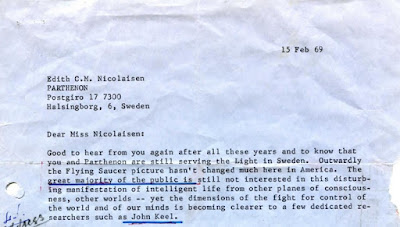 Edith Nicolaisen corresponded with almost all the known first generation UFO contactees and many ufologists active between 1950-1980. To my knowledge there is no correspondence archive in the world comparable in this respect. Although most letters are from individuals involved in the UFO contactee movement, there is a surprisingly large amount of correspondence from individuals like John Keel, Jacques Vallee, Ingo Swann and many others. There is a fascinating early letter from John Keel, January 28, 1970, where he laments the hostility he has encountered from the mainstream, scientific ufologists, who do not understand his research. 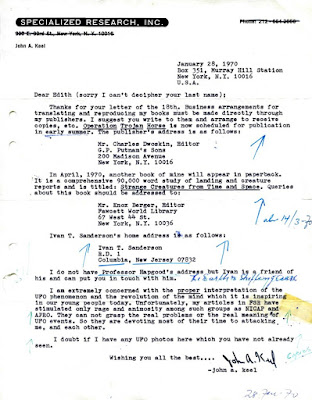 As Edith Nicolaisen corresponded with many UFO contactees, not simply of personal interest, but in order to publish their books, she often became close friends with the contactees and the letters reveal details of UFO sightings, contacts and what happened behind the scenes in the UFO movement. One of the foremost publishers of contactee literature in the 1950s was the New Age Publishing Company in Los Angeles, directed by Franklin and Dorothy Thomas. Employed in this company was also a man from Sweden, Mr. Carl E. Hallgren. In the Parthenon archive I have found 46 letters written between 1957-1960, correspondence with both Dorothy Thomas and Carl Hallgren. These letters are fascinating reading, giving insights into the discussions of which contactees should be regarded as genuine and reliable. Notice in this letter the comments on contactee Lee Crandall, author of the Venusians and Trevor James (Constable), author of They Live in the Sky. 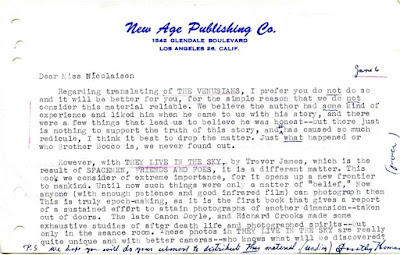