The Rise and Fall Of Understanding, Inc.

In the 1950s and 60s a remarkable social phenomenon emerged, basically concentrated in the State of California. It was organizations founded by UFO contactees, individuals who told of physical and telepathic contacts with space people. Three of these contactees, Daniel Fry, George Adamski and Gabriel Green, succeeded in creating large organizations with local units in many U.S. states and even abroad. Understanding was founded in 1955 by Daniel Fry, El Monte, California, with only nine members at the beginning. In September 22, 1960 the organization was registred as a non-profit corporation in the state of California, Understanding, Inc. By 1975 no less than 86 local Understanding units had been registred, the last one documented, founded  in Tonopah, Arizona. 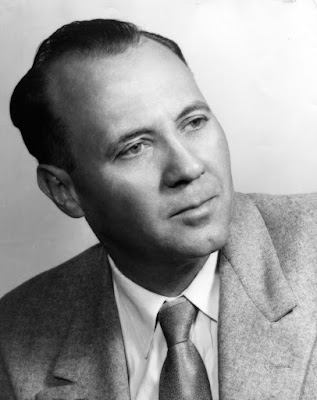 In depth research and documentation is still very much lacking regarding the history and development of these organizations. This is probably partly due to the problem of finding archives with easily accessed original documents: newsletters, correspondence, photos etc. At Archives for the Unexplained (AFU) in Norrköping, Sweden we have for many years been working hard trying to salvage organizational archives from around the world, digitizing documents and making them aviable free on the internet. When it comes to Daniel Fry´s organization Understanding we must commend the excellent efforts of Sean Donovan in Canada who has salvaged and preserved the Understanding archive and making much of the data accessible on a website dedicated to Daniel Fry. 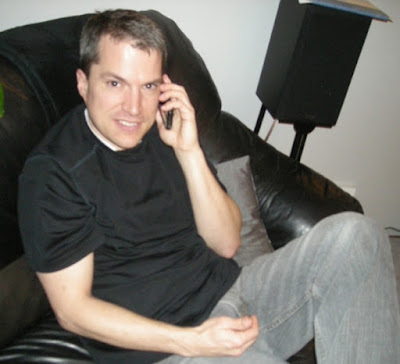 Between 1955 and 1975 altogether 86 Understanding units were registrered in the Bulletin Board. A unit could be formed if there were five members. The organization was to a large extent California-based. Unit locations in the U.S. states: California (48), Oregon (7), Arizona (4), New, York, Oklahoma, Washington (3), Florida, Michigan, Wisconsin (2), Nevada, Maryland, Minnesota, Montana, New Jersey, North Dakota, Ohio, Pennsylvania, South Dakota (1). There were also three units in Canada and one in Nigeria. In 1963 Understanding Sweden Unit no 1 was founded by Sven-Erik and Ing-Marie Asklund. The unit had some twenty members and during 1963-64 gathered at the Asklund home at Bandhagen, a suburb of Stockholm. The unit was discontinued in December 1964. 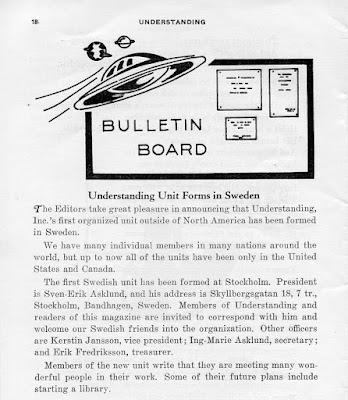 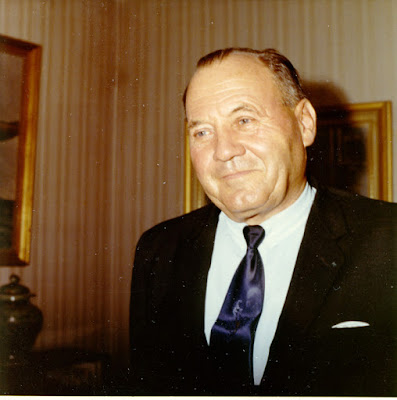 Usually between one and four new units were founded every year between 1955-1975. Understanding had its peak activity years in the beginning of the 1960s. In 1960 there were 24 new units registrered, 1962 eight new units and in 1965 ten new units. Directors were named Presidents and represented people from all walks of life, some with a Dr. attached to the name. Of Presidents mentioned in the Bulletin Board 70 were men and 55 women. In May 1963 a unit was formed at Stanford University, California by J. Lynn Mason. Generally members were people involved with various metaphysical, theosophical and UFO contactee groups.

Several of the local Understanding units initiated an impressive amount of activities, lectures and social gatherings. Lecturers were often the well known UFO contactees of the period such as George Adamski, Orfeo Angelucci, George Van Tassel, Dana Howard, Wayne Aho and of course Daniel Fry. A frequent guest and lecturer at the local units was Riley Crabb, from 1959 director of Borderland Sciences Research Foundation (BSRF). As the entire BSRF archive has been donated to AFU I have been able to study the correspondence between Riley Crabb and several of the local Understanding units in the 1950s and 60s. So far I have scanned 757 letters in the Riley Crabb file often giving interesting background information about Understanding units and activities. 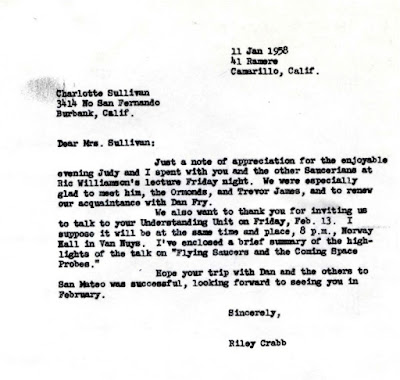 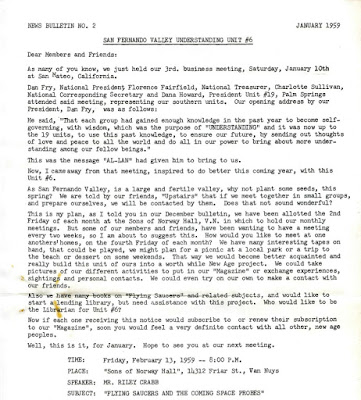 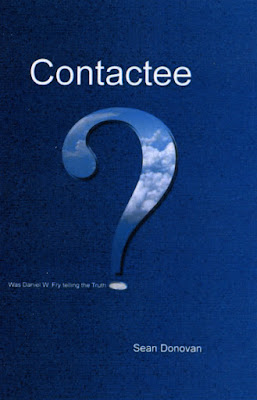 Understanding Unit no 15, Inglewood, California was founded already in 1958 and was a very active local unit. In September 1985 newly elected President Bill Hamilton sent out a leaflet announcing a lecture by Al Synder. In this leaflet is also mentioned that ”In the future, we will be changing the name of the group to the Association for Universal Understanding as we are no longer connected to the now defunct Understanding, Inc.” But as the original organization was still functioning with the new name World Understanding, Inc. why not simply rename the unit World Understanding Unit no 15? Perhaps some of my blog readers in the U.S. can solve this mystery? 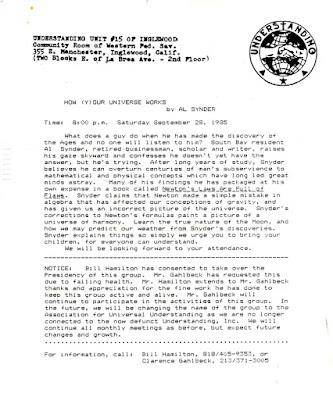 Daniel Fry wrote of his contact experiences with the spaceman Alan and the philosophy he received in several books. Essentially it is a message of goodwill and peace: ”… creating a greater degree of understanding between all the peoples of the earth, and of bringing to them some of the understanding of those beings who are not of earth.” (Understanding, vol 1, no 1, Jan. 1956, p. 1). Alan explain that humanity will not survive if we do not succeed in reaching a balance between the physical or material science, the social science and the spiritual science. ”Understanding is the key to survival for your race. There is little value in a treaty, a pact or a guarantee between governments, if understanding is lacking between the people” (Daniel Fry, To Men of Earth. Including The White Sands Incident, p. 115). 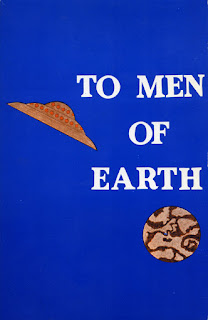 There is much of philosophical and spiritual value in the messages given by Alan to Daniel Fry. Words of wisdom and inspiration that became the core teachings presented in the Understanding units. As I have stated many times before I have advanced the theory that behind some of the 1950s contactees was a benevolent group of aliens visitors from somewhere who initiated a cultural and psychological influence test, at a critical moment for our civilisation. Some of the people contacted tried their best to implement the projects and ideas received by the visitors. Others couldn´t stand the psychological strain of the experiences or invented fake stories when the real contacts ended.

Alan´s basic message that understanding is the key to survival for humanity has an immediate appeal but still fails to adress the problem of evil. We may understand the ideas and motives of a Hitler, Stalin or ISIS leader but we will still be killed or imprisoned if we have a different idea. No amount of understanding will help us in this respect. Only force or power will do the job. Many of the members in the Understanding were mystics, who often fail or refuse to recognize the problem of evil or admit that an individual can be totally evil. Dag Hammarskjöld, 2nd Secretary-General of the United Nations learned this lesson during the Congo-Katanga crisis in 1960-61. His best friend, Bo Beskow, related a conversation he had with Hammarskjöld in 1961 when he asked whether Dag still believed in the good in man, that there is something good in all people? ”That Summer, 1961, Hammarskjöld was very serious in his answer. You know I have concluded something I never thought possible. I have discovered that there really exist completely evil people.” (Documentary, Swedish TV October 29, 2005). 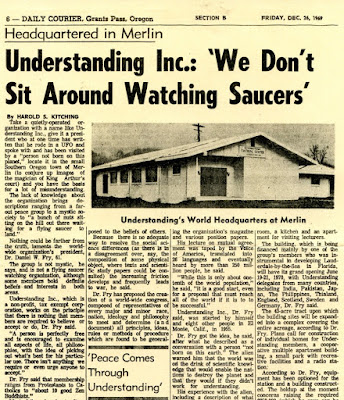 In the last book published by Daniel Fry, When In Cairo, there are indications that Alan was really very aware of the problem of evil. This is a strange, unfinished book by Fry which he claimed was 70% true. It is a sort of spy novel where Alan is the leader of a secret group fighting an evil society in Egypt (The Shukran), trying to find and use hidden  technological treasures from the Atlantean civilization: ” We simply must find some way to stop this insane organization before they take over all of Egypt and plunge the nation into a hopeless war of conquest. The three leaders are the most dangerous of egomaniacs, whose ambition has absolutely no limit. If they succeeded in conquering the entire earth. they would immediately set up a huge space program just so they could go to other planets and conquer them too!” (p. 12)

Another fundamental idea presented by Alan is the necessity of balance between physical, material science, social science and spiritual science. In the human being this could be compared with balance between the physical, emotional and intellectual/spiritual part of man. The problem is that humanity on this planet has no generally recognized spiritual science, only various religions and more or less obsolete belief systems. The custodians of the science of the multiverse (Esoteric Science) have only recently made some tests in giving this science to humanity. But mainstream academic scholars will probably not take an interest in esotericism until definite empirical evidence of the etheric worlds and their inhabitants can be presented in the form of photos and films. An elementary outline of The Esoteric Tradition was presented by Daniel Fry in his book The Curve of Development. This is actually an excellent, easy to read, introduction to the science of the multiverse but as usual, unfortunately, mostly introduced in old religious terms.

There are still many unanswered questions regarding the contact experiences of Daniel Fry. Who was actually Alan? Is he or his group still around? Why didn´t such a large organization as Understanding survive the death of Fry in 1992? There were many capable local leaders who could have continued Daniel´s work. Further in-depth research on the history of the Understanding movement could perhaps give more clues to this enigma?
Posted by Håkan Blomqvist at Thursday, August 02, 2018