In his groundbreaking 1983 book George Adamski – The Untold Story, co-written with Lou Zinsstag, Timothy Good refer briefly to an old friend he had known for a long time who had met the same or a similar group of benevolent visitors as George Adamski. Although he had not at the time permission to reveal the name of the witness, nor the details of the experiences he stated that it was ”for me the most reliable contact case I have yet encountered” (p. 195). 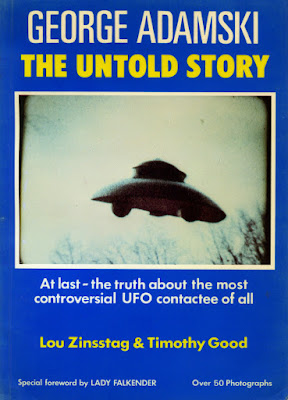 In a letter to Timothy Good in 1984 I asked why he regarded her as reliable: "Re. my contactee friend. Why reliable? I have known her since 1952 and can vouch for her integrity. She has never tried to capitalise on the story, and, indeed, is unable to discuss all the details, due partly the the ET`s ability to control her memory of certain things they told her, and also because she was in the Maquis (French Resistance) in the last war, and thus is able to keep some information to herself. I hope one day to be able to publish the story" (Letter August 28, 1984).

The witness in this contact story died in 1995 and subsequently Timothy Good could publish all the details in his 1998 book Alien Base, although he didn´t reveal the full name of the witness, only calling her Joelle, ”because she was reluctant even to have the story published  after her death” (p. 248). But already in 1989 I was informed of her full name, Mrs Joelle Marchemont, by ufologist Norman Oliver, who had also been involved in the case (Letter, September 1, 1989). Timothy told me later that ”I introduced several ufologists to ”Pixie” (as I called her), including Norman Oliver” (email, March 23, 2008). 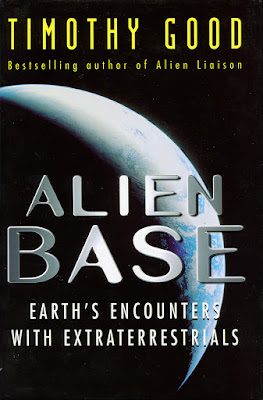 The nine pages covering the so-called Blue John case have been published on the internet, so here is just a short summary of the story:
Joelle was born in St Petersburg, Russia in 1914. After the war she worked in Paris and later moved together with her husband and two daughters, Frederique and Isabelle, to London. In September 1963 Joelle was in the Sheffield area conducting a house-to-house field survey for a market research company. In one of the houses Joelle visited she noticed an unusually large amount of modern-looking gadgets, including a large radio transceiver. The lady in the house, Rosamund,  explained that her husband was a scientist and radio amateur. When Rosamund briefly left the room Joelle heard a message in English from the radio: ”Will be at Blue John tomorrow 4.30 p.m. – Mark”. She wrote down the message but when Rosamund came back she was only informed that message had come through. This obviously chocked Rosamund. Because of her background in the French resistance during the war Joelle suspected she had uncovered an international spy-ring and decided to go to the Blue John caves at the time mentioned.

On Monday September 16, 1963 she went by car to the this area and parked at a vantage spot overlooking the valley – and waited. At 4.30 p.m. Joelle noticed a brilliant light in the sky which came to rest several hundred yards from her position. The glow ceased and a disc-shaped aircraft appeared instead, landing on tripod landing legs. A man in a one-piece suit stepped out of the craft and simultaneously a man appeared coming from a car parked nearby. Joelle recognized the car as the one that had been parked outside Rosamund´s house. The two men greeted each other warmly and walked towards the car which drove away. The craft began to glow, lift off from the ground shooting off at a fantastic speed.

At that time Joelle did not accept the existence of flying saucers and believed the craft to be some sort of secret Russian aircraft. She decided to go back to Rosamund´s house to find out more and then perhaps report the incident to the police. When she knocked at the door the scientist husband, in the story named Jack, opened the door but was reluctant to let Joelle in. At that point Mark, now in terrestrial clothes, interjected ”that´s all right, let her in”. Joelle tried to present a cover story that she needed some more answers for her field survey. Mark understood that this was a lie and said: ”Why don´t you tell us the real reason why you are here?...You came here because you saw my craft and wanted to find out what was going on”.

Joelle was ”let in” on the truth and spent a large part of the night talking with the visitor. She gradually accepted that Mark was indeed a man from another planet. For the next fifteen months Joelle had several meetings with Mark and another visitor, Val. Two times they met in Joelle´s flat in London. These men claimed they were secretly working together with a team of scientists from several nations. At one occasion Joelle was invited to inspect one of their craft that had landed close to the Welsh border. She helped the visitors in a number of ways. Val and Mark were extremely refined, fair-skinned with perfect teeth, very kind and perfect gentlemen with lots of humour.
In 1967, three years after the last meeting with Mark and Val, Joelle claimed to have been visited by two men from the Home Office in London. They wanted to know about the disappearance of Jack and Rosamund and som other scientists. The men were aware of the contact story but Joelle refused to answer some of their questions. Neither did she tell all she knew to Timothy Good. One of the things mentioned by Mark and Val was that their group would intervene in the event of a nuclear catastrophe, if it threatened to destroy our planet. She was also informed that we are spiritual beings, surviving death. The experiences with Mark and Val remained a treasured and vivid memory for Joelle all her life.

To my knowledge not much has been written about this extraordinary story, nor has any ufologist tried to follow up on the case, with the exception of Norman Oliver. In the British UFO magazine Gemini, vol. 1, no. 3, July-September 1972, pp. 9-13 Oliver did write a summary of the case with a few added details. The lack of follow-up was explained to me in a letter from Norman Oliver: ”To the best of my knowledge she only repeated her claim of the Blue John events to three or four people and specifically requested that it not be checked out further.” (Undated letter, September 1991).
In an earlier letter Norman Oliver did mention some interesting facts not presented in his article: ”No follow-up was possible as those concerned was said by ”Joan” (Joelle-HB) to have left the country soon afterwards, as indeed she did herself: an interesting point, incidentally, was that she herself held no nationality. The area of the occurrence was visited on several occasions and there would seem to be no obvious reason, son far as the terrain is concerned, why events might not have occurred as she stated…” (Letter, September 1, 1989).

The problem with this case is that there is only one witness, Mrs. Joelle Marchemont, and very little circumstantial evidence to support the story. But in his article Norman Oliver mention one intriguing detail. ”Joan had subsequent meetings with all three (visitors-HB), but didn´t give further details beyond saying that this spaceman was allegedly for sending another to see Waveney Girvan, then editor of Flying Saucer Review, shortly before his death… It was not until 1970 that I was told, quite out of the blue by a speaker who had come down to a Kensington meeting, of a luncheon engagement kept with Waveney Girvan some weeks only before his untimely death. He had then told his two guests that he had been visited by a man who alleged he was an extra-terrestrial, and who had related the Blue John episode to him… To me, this was a most remarkable coincidence unless, of course, a ”contrived” one with the object of perpetrating a hoax. This seems a little unlikely to me however, and would I am sure, if it were the case, have been discovered by Waveney could he have continued investigations… One of those in whom Waveney confided details of his visitor is a contributor in this issue of Gemini; the other is equally well-known.” 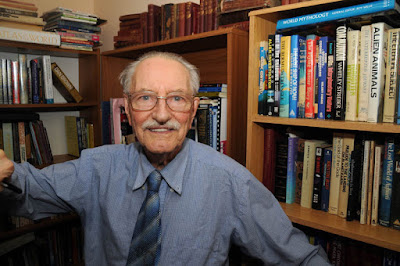 There have been several cases of ”exchange of personnel” with UFOs and cars involved. John Keel, R. Perry Collins, Ardy Sixkiller Clarke a.o. have documented such stories, as I mentioned in my blog entry UFOs and covert activities. Based on the data we have there appears to be several different type of visitors as ”aliens among us”, possibly with different agendas. But the alien visitors who Joelle Marchemont became involved with obviously were benevolent and were here to help this unhappy little planet. At the same time they were pretty realistic about our future. They once remarked to Joelle: ”What a beautiful planet. Such a pity your´re destroying it” (Timothy Good, Alien Base, p. 256).