Was there a hidden hand, an ancient esoteric society behind some of the first UFO contactees of the 1950s? Were George Adamski, Orfeo Angelucci, Daniel Fry, George Van Tassel, Howard Menger a.o. involved in a psychological and cultural test made by this hidden group, working in collaboration with benevolent alien visitors with access to Vimana technology? This is the rather controversial theory, the Esoteric Intervention Theory, I have advanced in my book, articles and blog. To determine whether this theory is tenable and can be validated requires much more research and empirical evidence.

During the last decades there has been a resurgence of interest in studying the connection between the UFO phenomenon and the Esoteric Tradition. This renaissance is partly due to the growing academic study of what is called Western Esotericism. To mainstream scientific ufologists this issue is more or less taboo as they don´t what to be associated with cultists and mystics. And there is a definite problem here, because how to establish and define what should be considered esotericism? 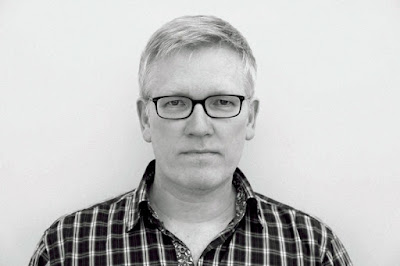 This question becomes clearly obvious when studying the writings of Dutch author Gerard Aartsen, an exponent of the British esotericist Benjamin Creme and co-worker of his organization Share International. Aartsen has written several books detailing the connection between the messages given by UFO contactees and the Esoteric Tradition, a.o. George Adamski. A Herald For the Space Brothers (2010) and Here To Help: UFOs and the Space Brothers (2011). Gerard has kindly donated his books to AFU. His latest, Before Disclosure. Dispelling the Fog of Speculation was recently published and can be downloaded free on his website. 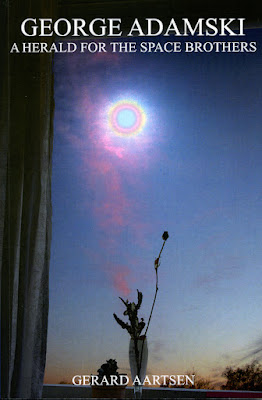 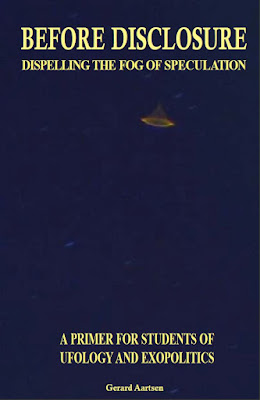 We have had an open and friendly correspondence since 2012, discussing various issues involving UFO contactees and esotericism. And this in spite of my critical comments on his books and Gerards presentation of the Esoteric Tradition. We have agreed to disagree on several points. So I don´t think he will be offended by my further, rather true than nice, critical comments on his writings.

The fundamental question is how to define esotericism? Can any teachings be regarded as esotericism simply because the proponents of some author or mystery school use this term? Is the writings of Rudolf Steiner, Martinus, René Guenon, Krishnamurti, Elisabeth Clare Prophet, Helena Roerich a.o. to be regarded as esotericism? My answer would be a simple no. When it comes to Benjamin Creme the problem becomes somewhat more complicated as his general presentation of esotericism is basically correct.

Let me give some basics as to what contitutes esotericism:
1. It is a Science of the multiverse, as exact as any academic discipline. A knowledge of reality presented by the "scientists of multiverse", adepts belonging to the "Higher Intelligence Agency" (HIA), so far a hidden organization, often referred to as the Planetary Hierarchy or Planetary Guardians.
2. Esotericism is not some form of mysticism or vague and irrational teachings and tales.
3. As a specialized field of knowledge, like academic philosophy, esotericism is not aimed for the general public but for those of a scholarly mind, researchers and intellectuals, with basic understanding of science and the history of ideas.
4. No demands for simple belief is ever given in esotericism, but for the students to regard the teaching as a working hypothesis.
5. Goodwill and a humanist outlook on life is fundamental to esoteric philosophy.

On March 28-29, 1987 I had the opportunity of parcipating in a weekend seminar with Benjamin Creme at Stjärnsund residential study center in Dalarna, Sweden. I was not impressed and wrote a critical article on Creme in the Swedish magazine Sökaren. Even though Creme´s presention of esotericism is basically correct his claims of channeling the adept Maitreya is a sad example of glamour or misinterpretation of inner voices. In almost every issue of the magazine Share International there are photos of obvious misidentifications of natural phenomena, not investigated. But Creme informs his readers that Maitreya confirms the objects as space craft from Mars etc. A clear exeample is the spiral phenomenon observered over Norway on December 9,  2009. The sighting has been definitely confirmed as a missile launch from the Russian submarine Dmitrij Donskoj. The launch was even announced beforehand. There is nothing mysterious about this missile launch. And it has happened before with the same result. So here is one message that definitely proves that Creme or "Maitreya"was wrong. 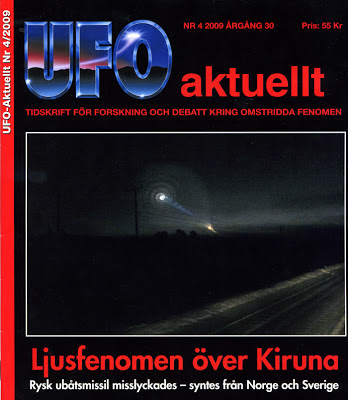 Benjamin Creme also says that only 4 per cent of crop circles are hoaxes. We (UFO-Sweden) know for a fact that just about all crop circles are hoaxes because we have investigated all of them in our country. There is one circle we are not sure of but in the other cases we have many times talked to the people who did them. Even complicated circles are easy to make. I know because I have made them myselves. Here is another claim when Cremes´ messages can be definitely contradicted by facts. Statements like these from Creme give esotericism a bad name 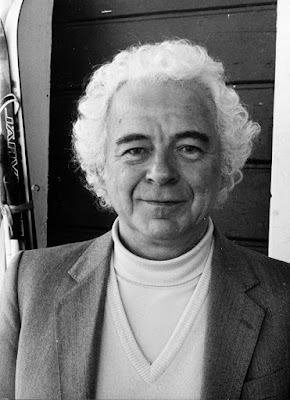 Gerard Aartsen, as well as Creme, endorse the teachings of Krishnamurti. In my view, one of the great riddles of the Theosophical movement is how so many theosophists can still promote the teachings of Krishnamurti. I can well understand the frustration of Geoffrey Hodson when confronted with the peculiar form of advaita mysticism of JK. An metaphysical quicksand that gets you nowhere and with no relation to Esoteric Science. Blavatsky with her forthright manner and vulcanic temperament would probably have given JK a harsh reprimand if they had lived during the same age. And Laurency, with his Blavatskyan temperament, is very critical and clear in his analysis of JK. Finding books by Krishnamurti in Theosophical bookshops is like finding books promoting atheism in a Catholic bookshop while the nice and naive manager of the shop doesn´t understand the difference between the two radically different world views. A sad state of affairs.

This is my general criticism of the writings of Gerard Aartsen, a confusing mixture of dubious sources and teachings with no relation to the core Esoteric Tradition. On his website Our Elder Brothers Return there are references to Krishnamurti, the Danish mystic Martinus and Helena Roerich. As for Roerich I would recommend the book Red Shambhala by Andrei Znamenski. He mentions that Helena Roerich was informed by the adept Morya to cooperate with Lenin and the bolsheviks to build their theocracy in Tibet. No elder brother would have advanced a plan to cooperate with one of the worst dictators in history. Readers can also study the article The False Mahatmas of Mr. and Mrs. Roerich by Lars Adelskogh. 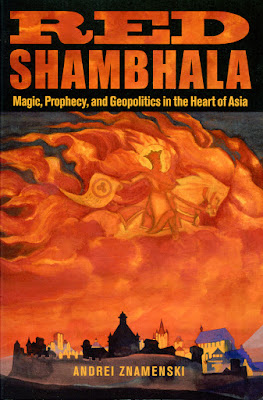 The latest book by Gerard Aartsen, Before Disclosure, also suffers from the mixture of sources of different quality. I will not go into details here but simply point out one factual error that may be of interest. Aartsen is critical of the secret space program claims from various whistle blowers in the United States: "... who had heard of "secret space programmes" before Ronald Reagan´s ill-concieved Strategic Defence Initiative of 1983, or even before the fictional governments of Earth decided to co-operate on a planetary defence system in the Independence Day blockbuster of 1996?" Actually several of the early 1950s contactees mentioned a secret space programme. George Van Tassel started alluding to this in the middle of the 1950s in his magazine Proceedings: "... the military research branches of the Goverment have had several anti-gravity, electro-magnetic test ships operating since the middle 1950´s. " (Proceedings, vol. 7, no. 1, February-March 1961).

To not appear as overly critical I wish to underline that there is also data and ideas of real philosophical value in the writings of both Aartsen och Creme. In spite of my criticism they can both inspire UFO researchers and philosophers to take a second look at the early contactees and make an in depth study of the core Esoteric Tradition. I also find Creme´s idea of "sharing" a worthy goal and certainly in line with esoteric throught. Especially when we see an increase in underpaid McJobs, materialistic consumerism and robber capitalism. There is a general goodwill in the messages forwarded by both authors. But I would advice a little more of esoteric discrimination. These quotes from the early classic The Mahatma Letters to A.P. Sinnett may be of some help:

" Unless regularly initiated and trained — concerning the spiritual insight of things and the supposed revelations made unto man in all ages from Socrates down to Swedenborg and "Fern" — no self-tutored seer or clairaudient ever saw or heard quite correctly." Letter 40.

"You know, S. Moses, and you know Maitland and Mrs. K. personally. And, you have heard of and read about a good many Seers, in the past and present centuries, such as Swedenborg, Boehme, and others. Not one among the number but thoroughly honest, sincere, and as intelligent, as well educated; aye, even learned. Each of them in addition to these qualities, has or had an + of his own; a "Guardian" and a Revelator — under whatever "mystery" and "mystic name" — whose mission it is — or has been to spin out to his spiritual ward — a new system embracing all the details of the world of Spirit. Tell me, my friend, do you know of two that agree? And why, since truth is one, and that putting entirely the question of discrepancies in details aside — we do not find them agreeing even upon the most vital problems..." Letter 48.