The American ufologist and contactee Carol Honey (1928-2007) is today largerly forgotten in the annals of UFO history. He was an aerospace engineer and accomplished hypnotist who for seven years was George Adamski´s right-hand man. But he also claimed personal physical contact and close co-operation with a group of space people secretly operating behind the scenes. Unfortunately very little research and documentation has been published regarding his contact experiences but I find him an intriguing and enigmatic figure in the early contactee scene. 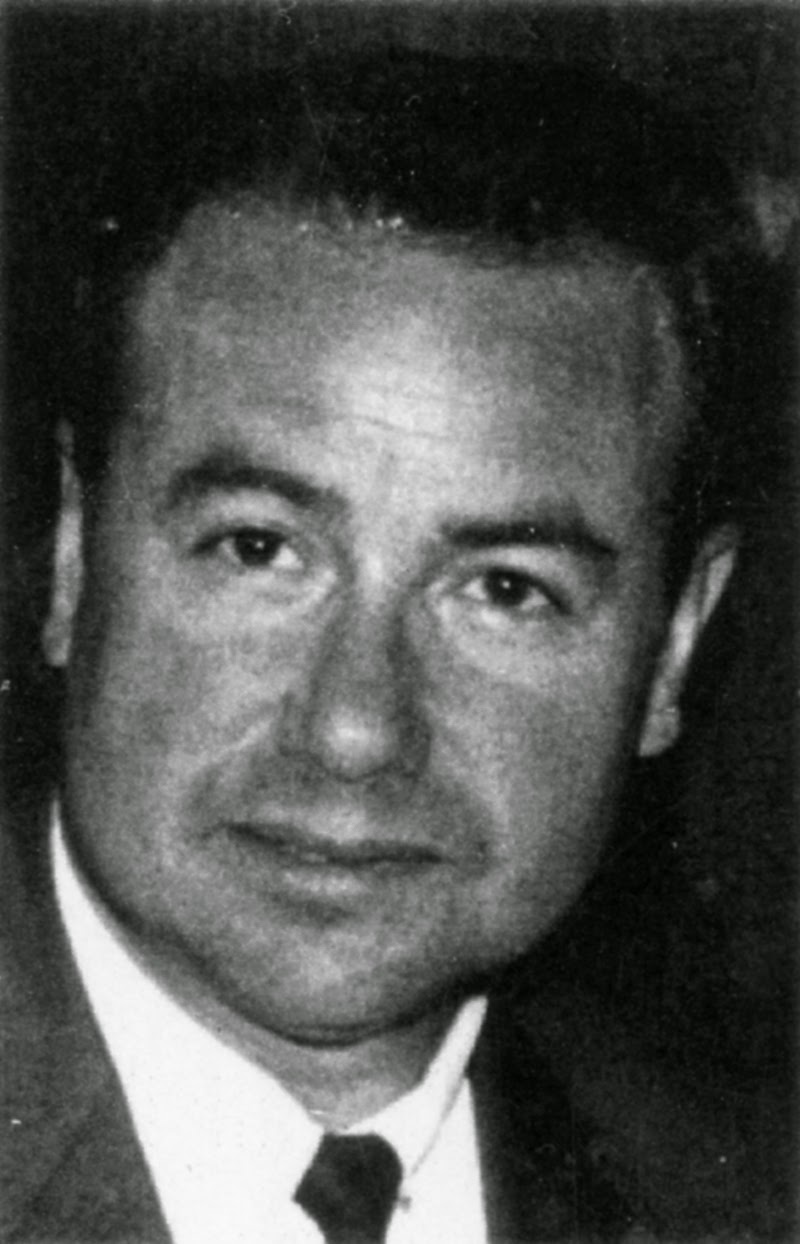 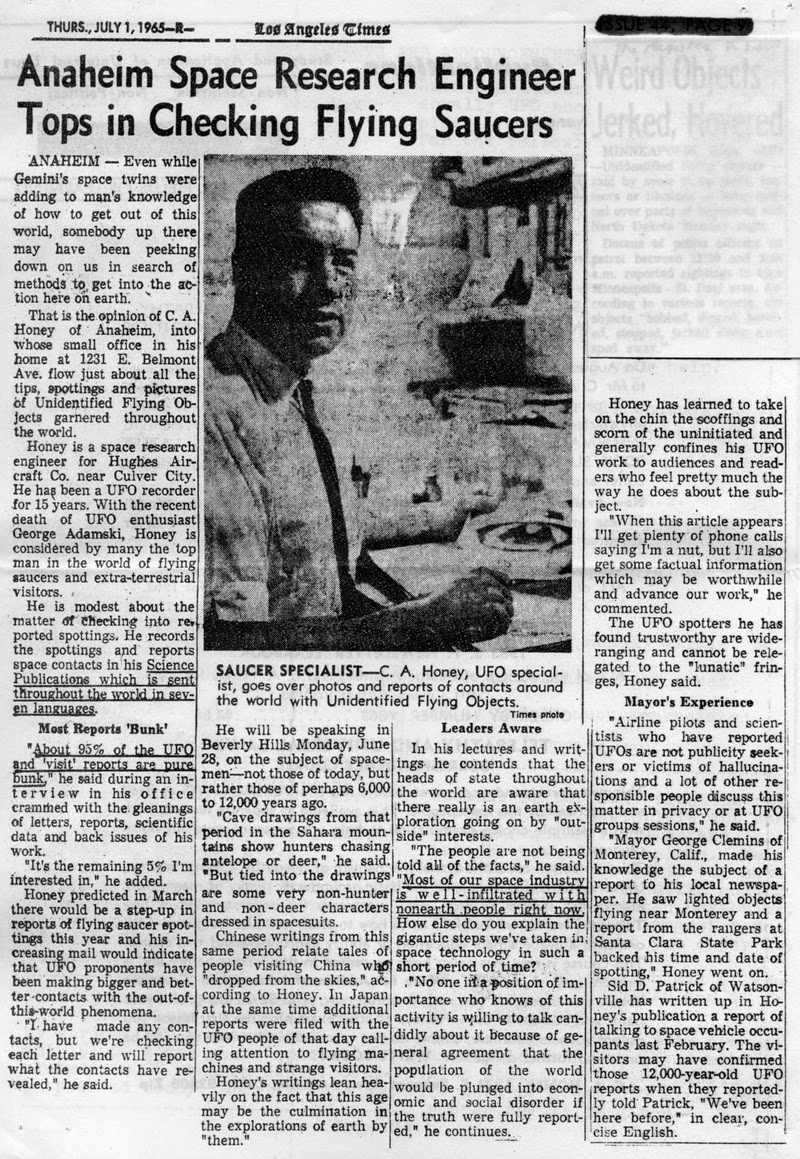 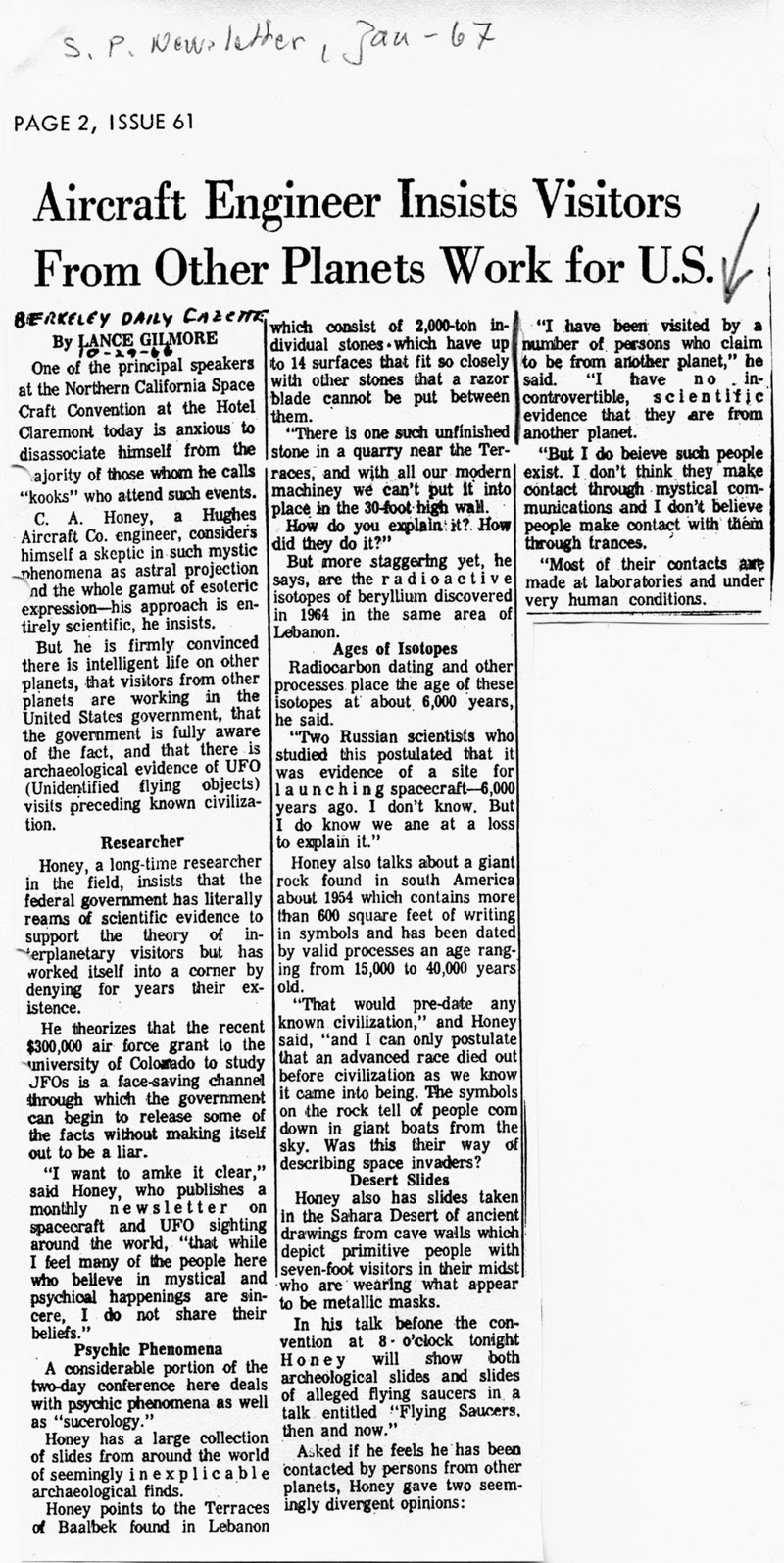 Much data on Carol Honey can be found in George Adamski. the Untold Story by Lou Zinsstag and Timothy Good, (1983). But information om Honey´s personal contacts with space people are a bit more difficult to trace. Bits och pieces of data are scattered in his publication Cosmic Science Newsletter, later changed to Science Publications Newsletter (S.P. Newsletter), published between 1962-1966. Timothy Good and Lou Zinsstag met and interviewed Carol Honey on November 19, 1979. Timothy has kindly sent me a transcript of the interview. To my great surprise they never asked about Honey´s personal contacts but concentrated on his co-operation with George Adamski. On two separate occasions, in 1979 and 1986, I wrote letters to Carol Honey with the hope of receiving more data on his experiences but he never answered. 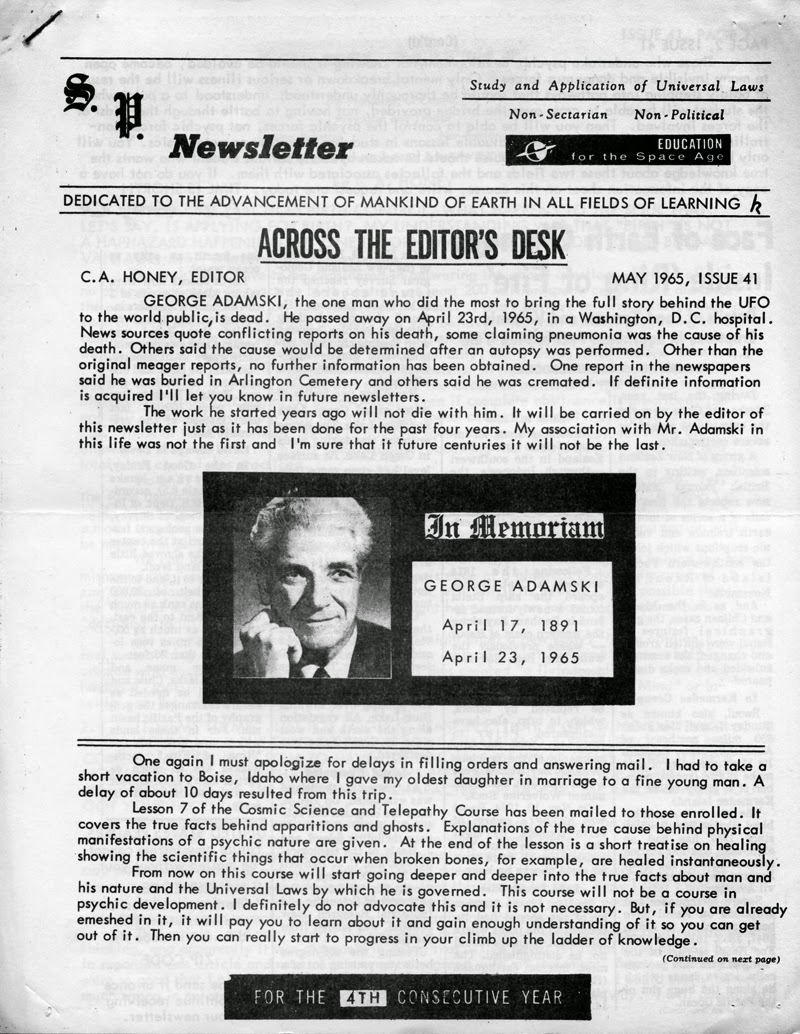 In a letter to Flying Saucer Review, March-April 1959, Carol Honey mention that his interest in UFOs began after observing a "huge UFO flying behind an airliner". He moved to California and started investigating witnesses and contactees but was disappointed when finding so many mystic channelers among the contactees. But things changed when he met Adamski: "I visited George Adamski at his home in November of 1957. I fully expected to hear the same type of story as I had been hearing. Instead I got a real surprise. Here was a story down-to-earth and not involving seances, trances and other such things as I had run into before." On a lecture tour with Adamski, Carol Honey had his first encounter with space people at a cafe in Oregon. 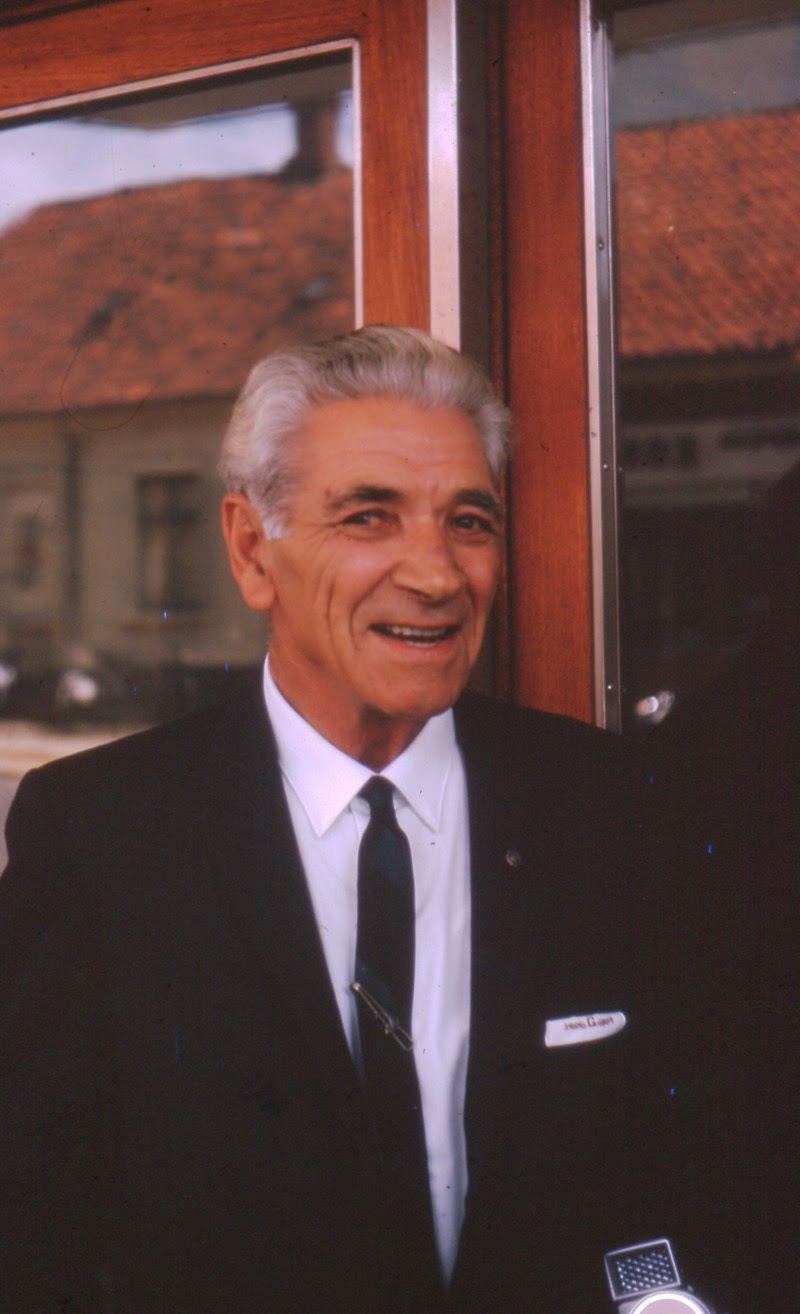 Here are a few relevant quotes from various articles by Honey regarding his contacts:
"I worked with Mr. Adamski personally for almost four years before I had my first contact. It was entirely unexpected when it occurred. Mr. Adamski didn´t know it occurred until some time afterward." (Cosmic Science Newsletter, June 1962, p. 1)

"While it is possible that more than one group was here on earth at the same time, those I worked with was comprised of only six individuals, each with a separate and distinct objective to accomplish. Certain United States leaders and scientists were working with them and one of those who knew what was going on was President Kennedy... Those living among us were supplied with funds by Howard Hughes and some of the reverse engineering was done at Hughes Aircraft Company. I personally had meetings with intelligence personnel of the United States who wanted certain information I had about the spacepeople." (Mrs O`Leary´s Cow, publication no. 302, November 2003, pp. 4-5)

"I was with Adamski when he had one of his contacts with ETs, to use the term som many use today and my own meetings were with physical humanoid people who periodically visited our planet when it was necessary to complete an assignment or help fulfill whatever job they were assigned to do at the time... This is not a claim that I am the only one having a legitimate ET contact. I am merely the person chosen years ago to lead the group among us here today and supply answers to combat the false ideas that abound today. Most people in the group are proceeding quietly and unobserved in their efforts to continue the public education." (Skeptical Analysis, publication no. 293, August 2003, p. 10).

Answer to a question from ufologist Lucius Farish: "Some spacepeople have scars from accidents, many do not... I have met one highly evolved spaceperson who had a bad scar so on this point I speak from personal experience. " (S.P. Newsletter, June 1963, p. 18).

"Six months before Mr. Adamski turned over his work to me, I was told by the spacepeople, during a face to face physical contact, that I had been chosen to succeed Mr. Adamski in his work. Sic months later I got the statement above from Mr. Adamski direct. Mr. Adamski was not present at that contact, or at any others..." (S.P. Newsletter, October 1963, p. 1).

Like many of Adamski´s co-workers Carol Honey left the partnership in 1963 when Adamski´s behaviour and claims became increasingly irrational. Edith Nicolaisen, founder of the Swedish publishing company Parthenon in 1957, and publisher of Adamski´s books, asked Carol Honey about his views and experiences in a letter February 10, 1968. Honey answered in a reply March 29, 1968: "George Adamski went off the beam before he died and many statements he made has destroyed much of the good he did previously. I can only back up the information in his first three books and most of this I can´t back up with physical evidence. I have had personal experiences myself which proved a lot of things to me but I will not make them aviable to a skeptical public." 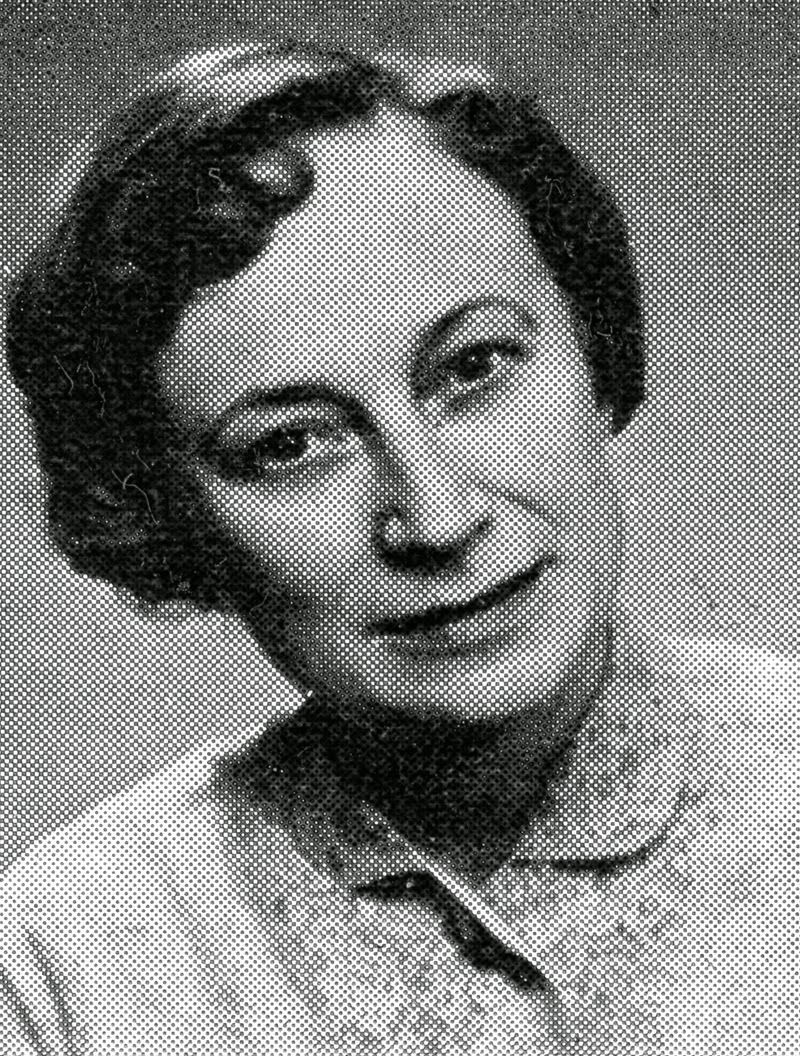 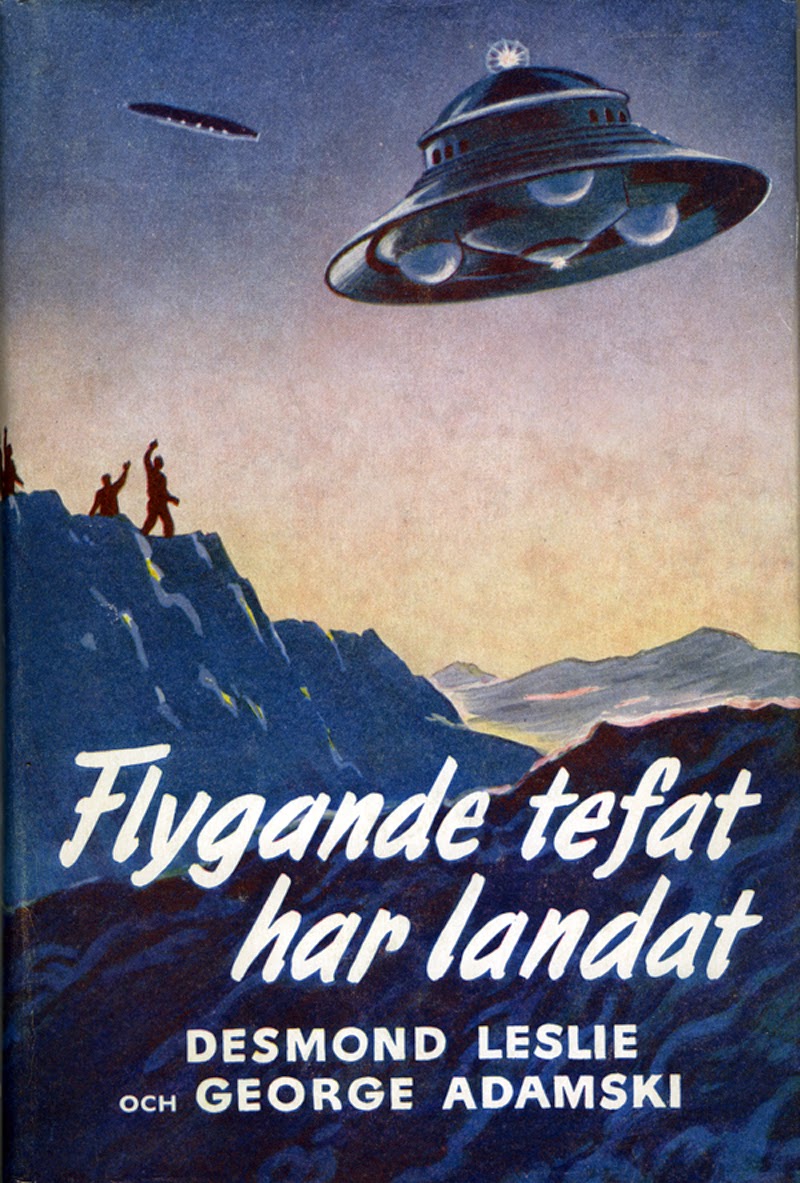 With only these sources and data it is very difficult to estimate the reliability of Carol Honey´s claims. He express a healthy skepticism when it comes to channeled information from spacepeople and is well aware of the psychological interpretations of these experiences. Many of his articles are scientifically oriented and down to earth, unusual in the contactee field. But when it comes to articles on religion and philosophy his lack of knowledge and scholarly erudition becomes obvious. There are some funny remarks on this issue in his newsletters:
"I have never read any books on philosophy (except Adamski´s Cosmic Philosophy), so I am unfamiliar with the way others use certain terms." (June 1962).
"Since the spacepeople have evolved far past the philosophical flounderings of earth, I feel it is unnecessary for me to waste time reading or studying the individual books here on earth." (July 1962).

I find it odd that Carol Honey never found or studied the more intellectual works in the esoteric tradition, Blavatsky, Leadbeater, Sinnett, Bailey. Perhaps his experiences among the 1950s California channelers and mystics made him skeptical to all such claims. If he, like Desmond Leslie, had studied the more academic writings in esotericism his perspective and knowledge would have been different. He could as an example have found his skeptical views on channeling confirmed and esoterically explained in Telepathy by Alice Bailey (p.75-77, 1966 edition). In this area he didn´t follow his mentor, George Adamski, who was well informed on Theosophy and the Ancient Wisdom. Carol Honey made a personal mix of metaphysical ideas combined with views from some psychics he supported, like Edgar Cayce.

During the later part of his life Carol Honey wrote hundreds of articles on various subjects that he distributed free of charge to anyone interested. Some of these were published in Flying Saucers 50 Years Later, privately published in 2002. I have found very few of his articles on the internet but one good example of Honey´s ideas is Fraud In Metaphysics, Occultism And Mysticism. Another is UFOs, What they Are Not.  Of interest is also an undated interview, Hunting the Truth. 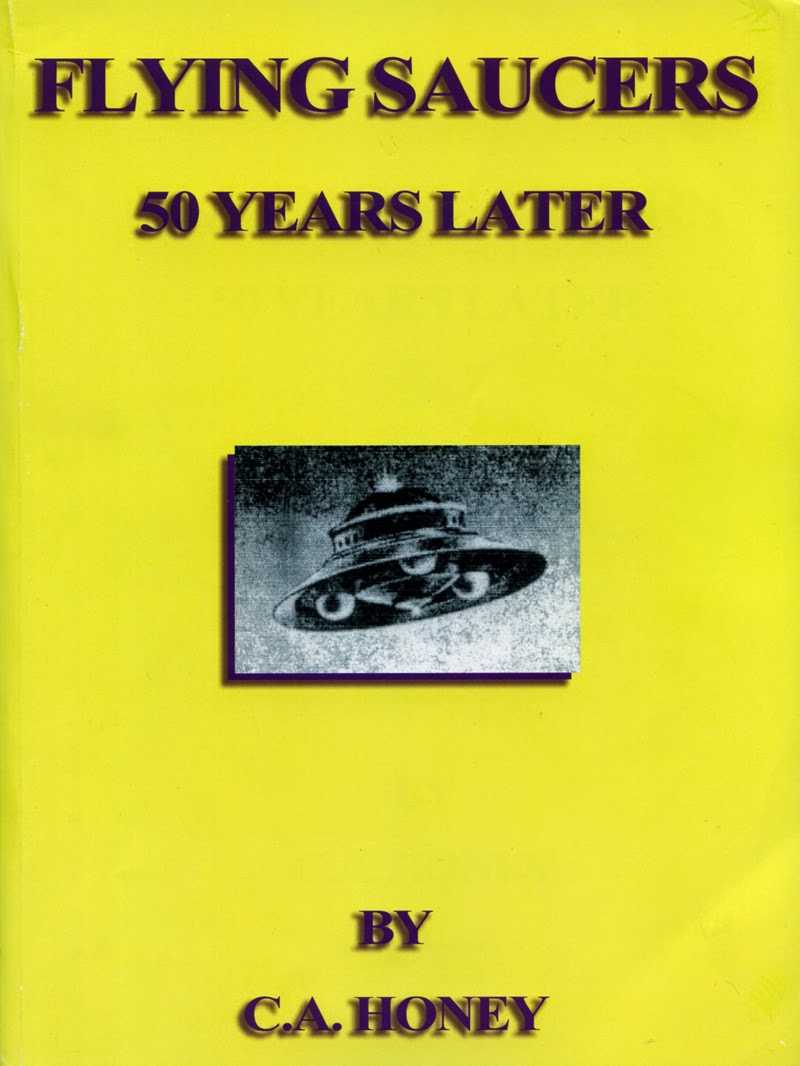 If Carol Honey really met some unknown individuals claiming to be spacepeople, were they telling him the truth or was "spacepeople" a cover to hide their real identity?