During the early AFU years in the 1970s and 80s we became increasingly aware of that any type of serious UFO research required an extensive and easily accessible archive, covering all aspects of the phenomenon. Not just reports, books, magazines etc. but also private correspondence and organizational files, facilitating a thorough study of the history of the UFO movement, including the psychological and sociological aspects. From the Heureka Moment when we became aware of the importance of saving archives the AFU team has consistently ”pestered” old ufologists with requests to donate their collections. No wonder Robert ”Bob” Rickard has named us The Viking Raiders. 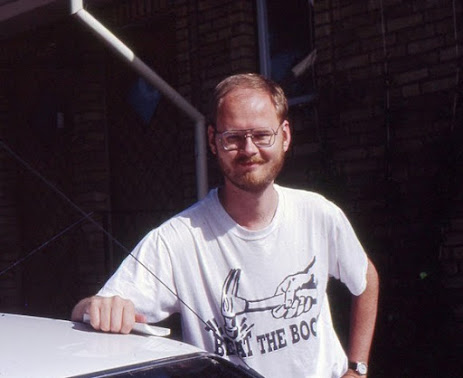 In the 1990s we began a systematic effort to locate old Swedish ufologists and representatives of UFO groups no longer active, to salvage and retrieve as many archives as possible. In this way much of Swedish UFO history was saved for future research. Practically all people contacted generously donated their archives but now and then our inquiry came to late and we were informed that all material had been burnt or dumped not long ago. A sad message when the collection was especially large or valuable. But many times we could celebrate a happy ending to our efforts when travelling home to AFU with still another archive in the car.

During the Summers of 1992-1993 Clas Svahn and I made two memorable road trips to the south of Sweden, combining field investigation with archive retrieval.

June 22, 1992
Clas Svahn pick me up by car in Norrköping and our first stop is Mariestad, birthplace of Clas. When 16 years old he began his ufological career by founding the local UFO-Sweden group UFO-Mariestad in 1974. 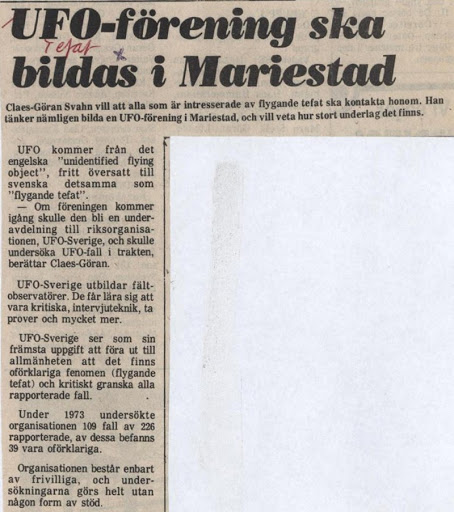 June 23, 1992
We head south towards Ängelholm and the home of pioneer ufologist and science fiction author Henrik Nanne. He wrote several sf-novels using the pen name Carl Henner. Henrik was a close associate of Edith Nicolaisen, founder of the publishing house Parthenon and he was the translator of the Swedish edition of Flying Saucers Have Landed by Desmond Leslie and George Adamski. Together with Henrik Nanne we first make a visit to the UFO monument outside Ängelholm sponsored by Swedish close encounter witness and contactee Gösta Carlsson. We spend the rest of the day in Henrik´s small one room apartment listening to his memories of the early UFO movement and also packing part of the Parthenon archive donated to AFU by Henrik. He offer us to stay the night in his small apartment but there are no beds for us so we try to sleep on the kitchen floor with only some sheets underneath. Not much sleep of course. We wake up every half hour with aching limbs. Luckily we were offered a couple of Whiskys before bedtime. 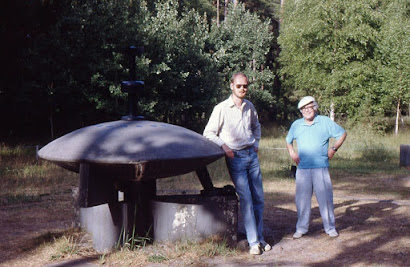 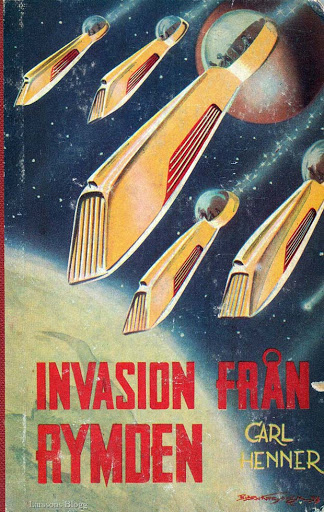 June 24, 1992
Tired and with aching limbs – but with high spirits - we continue our journey to Ebbe Johansson, another of the Swedish UFO pioneers, chairman of Malmö Interplanetariska Sällskap (MIS), founded in 1958. We also met Gert Carlsson and his wife. Gert was one of the founders of the magazine Arcanum, with articles on esoterism, UFOs and ancient mysteries. Arcanum also had a large library, which was now to be donated to AFU so we loaded the car with books and magazines. After saying godbye to our friends we returned to Norrköping and AFU with our latest donations. 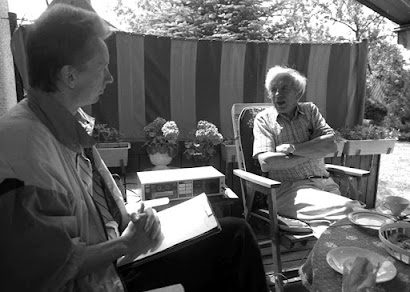 Interviewing Ebbe Johansson at his home in Malmö 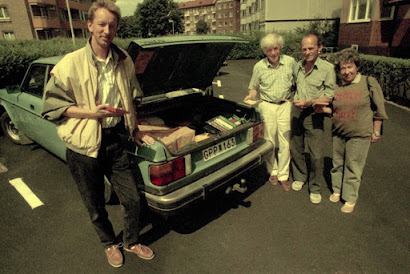 As we were promised further donations from several ufologists Clas and I made another road trip to the same southern part of Sweden during the Summer of 1993.

July 11, 1993
I go by train to Stockholm where Clas, together with his young son Niklas, pick me up by car and we travel to Enköping, loading the latest issue of UFO-Aktuellt. Crop circles was a big issue in the 1990s. Before going south we visit a field outside Sala to study a reported crop circle. Here we are met by UFO-Sweden board member Mats Nilsson and Ingrid Roxhed. 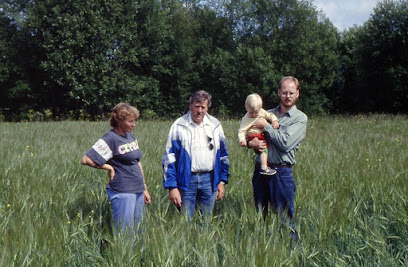 After having documented the crop circle the journey continues to Mariestad where little Niklas is taken care of by Clas´ parents and we head for Gothenburg and dinner with two UFO-interested ladies Louise and Wiweka.

July 12, 1993.
After breakfast at a Gothenburg hotel we spend a few hours visiting antiquarian bookshops. I bought a biography of French esotericist René Guénon and then our next stop was Henrik Nanne, Ängelholm.

July 13, 1993
As we had been promised further donations from the Arcanum library we travel to the home of Yngve Freij. Here to our great joy the entire library is given to AFU so now the car is once again filled with books. 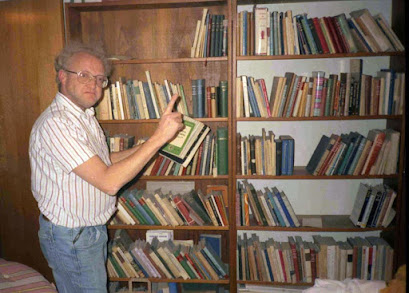 Yngve Freij in front of the Arcanum library

One of the real pioneers of the Swedish UFO movement was librarian, translator and writer Roland Adlerberth (1923-1993). We had been promised a donation of his extensive collection of UFO and Fortean clippings. At his home we are met by his wife who helped us load the clipping collection, now housed at AFU. 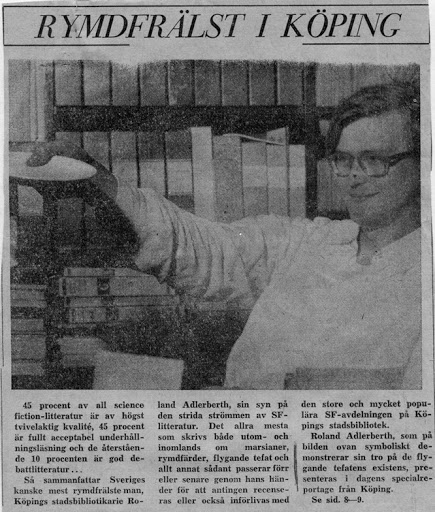 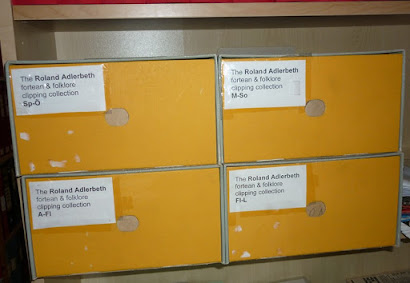 Before returning home our last visit was Gösta Carlsson at his home in Ängelholm. We waited a long time before he appeared but finally he let us in for an extended interview. The result of this interview and many others done by Clas Svahn resulted in the by now classic Mötet i gläntan (Meeting in the Glade). Already published in two editions, a third edition is in the planning. 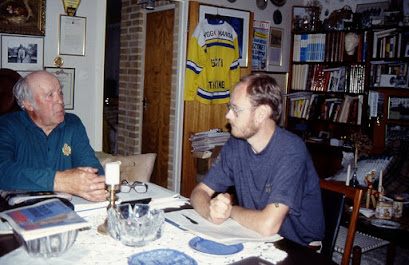 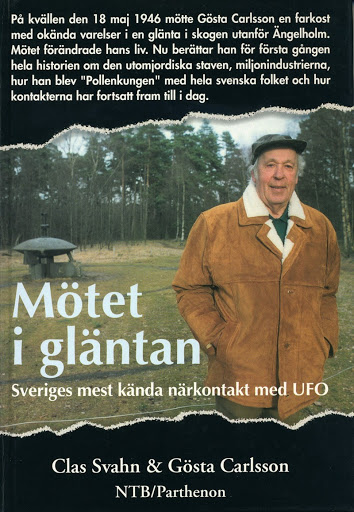 Back at AFU Clas and I could once again celebrate a successful journey, resulting in new donations and joyful memories.
Posted by Håkan Blomqvist at Wednesday, August 12, 2020