It is the 18th of May 1946, the clock is 10 pm. The sky is dark blue and clear, a light breeze is blowing from the east. I´m sitting and listening to the beautiful birdsong … It starts to get darker, and I realise it is time to head back home. I turn on my orientation lamp which I always carry with me on my evening strolls. Just as I am about to turn I spot something that has forever stuck in my memory.
In the furthest part of the glade, just a couple of meters from a lonely pine, there is a illuminated craft, one of which I have never seen before or after. My first thought was that it was a carrousel someone had drove there. But I soon realized that would be impossible, as there are no roads leading to the glade. 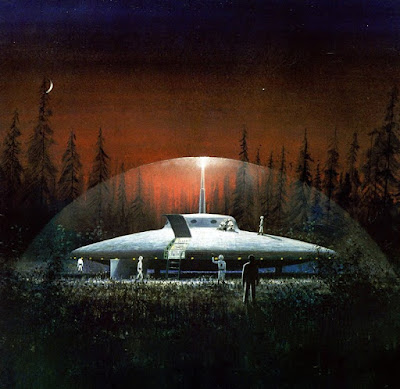 The craft, or object, had the shape of a discus, and it is resting on a sturdy fin in the direction of the lonely pine, and two telescope legs, all three evenly spaced under the circular disc. In front of the fin on the crafts belly, there is a hatch open, with a ladder and leaders, like those ladders you see on boats. The hatch is about one and a half meter above the ground and I can see how light is coming out from the opening. I try to look inside the craft but the angle is to narrow. All I can see is the bright light.

On the top of the craft there is a streamlined cabin that I estimate to be around 8 meters in diameter. With roughly 1 meter spacing there is oval windows, maybe 50 cm wide and 30 cm high. While I am watching the craft I can´t keep from thinking that someone is pulling a prank on me. One thought that goes through my head is that this may be German pilots that has escaped from some camp. But deep inside, I know I´m wrong.

The "body" and the cabin seems to be one piece. You can´t spot screws, studs or joints anywhere. Around the belly’s rim on the craft there is a couple of holes, not unlike those found on turbines, pointing down and are covered with what look like a damper. A few meters in front and outside the light´s circle, a man with a white dress is standing. He is dressed like our astronauts of today. No matter how hard I look, I can’t see any buttons, zippers or other "clothing attachments". On his feet he has blue or black boots that wrap around his legs, around his waist he has a large blue or black belt, on his head something that looks like a rain hoodie or "windcheater hoodie" with the difference that it also covers the front of his face and are made of some transparent material. On his hand he got finger gloves. On his chest hangs something that looks like a folding camera, but other than that, there is no equipment. The man appears to be a guard. Where I am standing now I´m about 10 meters from the craft, and about 7-8 meter from this man. 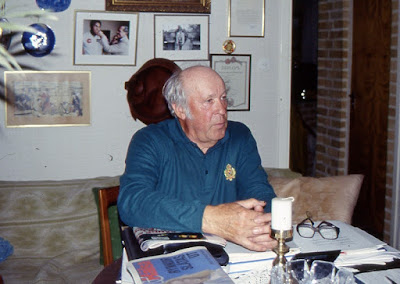 The witness Gösta Carlsson at his home in Ängelholm, July 13, 1993

On top of the craft by one of the windows there was an additional three men, evidently occupied by some kind of work. Right next to them, but below, I see two more men who are assisting and inside the light circle, turned towards me, there are three women. All dressed the same way, in the same white dress, boots and belt. All the beings that are inside the light have the transparent face mask removed to the back of their heads. Suddenly something happened.

The man who was standing outside the light - which whom I now understand was serving as a guard - did a perfect stop sign with his hand raised. It is a sign that cannot be misinterpreted and I stopped. I still have my lamp on my head, but turned off. The guard points his "folding camera" looking thing towards me, and I get the impression that he is about to take a picture of me. I think I hear a crack from my lamp on my head, that I have turned off, but don´t bother with that… Suddenly, a woman with dark curly hair steps down the ladder of the craft. In her hand she holds what looks like a bag and hands out cups to the men and girls. Everyone stop working and start to drink from the cups. By the time I am standing there and watching, I can see the crew go in and out the craft, up the ladder next to the fin. When they do that, I observe how the two telescope legs moves up and down. They are spring loaded like the front wheel of an airplane. 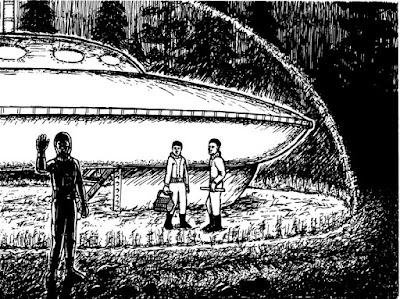 Just as I am about to take a step forward again, the girl with the dark curly hair steps outside the cabin again. In her hand she hold a bright shiny object which draws the attention from all the other in the crew. She takes a few steps towards the outskirt of the light dome and throws the object out with a quick motion. It falls right next to a little slope. At the same time I hear a happy woman’s laughter, and I realize this is the first time I hear a noise from them this whole time. But I have heard the crackling of twigs by the guards feet on the grass which is spread all over the ground. The whole thing starts to be very surreal to me, and although I am one of those person who has never tasted alcohol in any form, and can therefore not blame this on some kind of hallucination or some other kind of imagination, I decide to hike back to the Skäldervik beach and then come back to see if it is still here.

It takes about 20 minutes to get there. I take of my shoes and socks and wade out in the water to wet my feet just to make sure I´m not dreaming. It is freezing so I am awake alright. Then, suddenly, I see a red light. At first I thought it was the moon rising, but after closer inspection, I realize that isn´t the case. Slowly, and majestically, the craft, which I now see clearly, is rising. It´s almost like a balloon rising.

This is a short summary of the 1946 close encounter told by Gösta Carlsson (1918-2003). The incident occurred outside the city Ängelholm, in the south of Sweden. It has become one of the most famous and controversial Swedish landing and contact cases. During the weekend May 18-19, 1996 UFO-Sweden arranged the annual conference and expo at Ängelholm. A memorable event for many UFO-Sweden members, who would get an opportunity to listen to Gösta Carlsson relating his story at the site where the landing occurred.

As Gösta Carlsson had become something of a celebrity in Ängelholm the media interest for the conference was all time high. When the expo opened at 10 a.m. on Saturday the 18th hundreds of visitors entered Ängelholms gymnasieskola (senior high school). UFO-Sweden representatives had a busy time guiding and informing about the various activities and UFO investigation in Sweden.
Of special interest was the exhibition show-case displaying the ring and rod that Gösta Carlsson had found at the place where the craft landed. The show-case was made of armored glass and guarded by a man from Securitas, which of course raised a few eyebrows. This was the first and only time the ring and rod were publicly displayed. 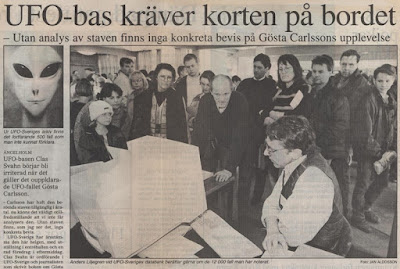 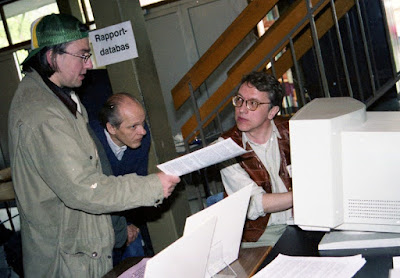 Anders Liljegren, right, at the expo 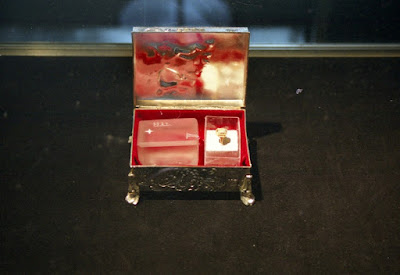 The ring och rod at the exhibition

At 6.00 p.m. hundreds of UFO-Sweden members gathered at the glade outside Ängelholm, where Gösta Carlsson told the listeners about his contact experience 1946. He also showed the UFO monument made of concrete and placed in the center where the landing took place. The monument is a scaled-down replica of the craft observed by Gösta Carlsson and is now an offical part of the Ängelholm cultural heritage. After the guided tour members gathered at the pub Källaren. Thomas Niby, chairman of the local UFO-Sweden group worked hard as bartender and offered a special UFO drink, enjoyed during the as usual lively discussions and mingling. 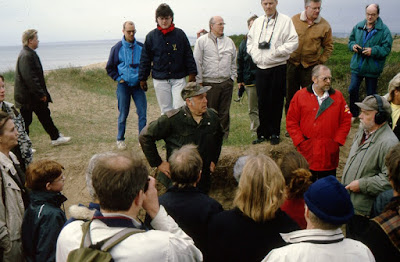 Gösta Carlsson in the middle recounting his experience 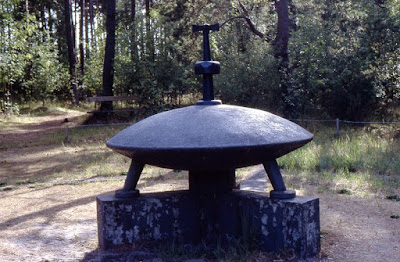 Sunday the 19th continued with several public lectures. Clas Svahn presented his very extensive investigation of the Gösta Carlsson case, documented in the 1995 book Mötet i gläntan (Meeting in the Glade), written together with Gösta Carlsson. Special guest speaker was Dr. Anton Geels, professor of Psychology of Religion at the University of Lund. He presented a psychological perspective of encounters with unknown entities. The program ended with a lively panel discussion. This was one of the most successful conferences arranged by UFO-Sweden with close to one thousand visitors during the two days. 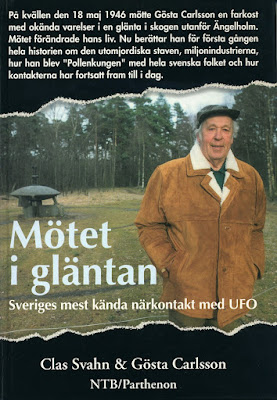 What is today the assessment of the Gösta Carlsson story? Clas Svahn, who spent many years investigating the case, is rather critical, having found several inconsistences in the tale. At the death of Gösta, Clas had been promised to receive the ring and rod, to be able to make a chemical analysis of the material. Gösta broke the promise and this piece of important evidence is now probably gone forever. 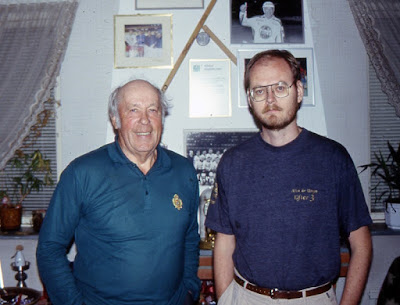 In the Summer of 1993 Clas Svahn and I visited and interviewed Gösta Carlsson at his home in Ängelholm. For me this was a very special experience. Usually, during relaxed interviews like this, you get an emotional and mental connection with the UFO witness. But talking to Gösta Carlsson was like speaking to someone inside a impenetrable psychic sphere or bubble. We will probable never get the definite answer to what happened to Gösta Carlsson in 1946 unless the ring and rod somehow reappear. Whatever the truth, his story is certainly fascinating and part of Swedish UFO history.
Posted by Håkan Blomqvist at Wednesday, July 01, 2020