Fifty Years in the UFO Movement

A couple of days ago my AFU and UFO-Sweden colleague Tobias Lindgren visited Örebro to record the first part in a series of interviews for UFO-Sweden Radio. UFO history and contactee research will be the main topics in these programs. From the organizational archives at AFU he also brought two binders containing the files from the first UFO group I founded in 1970, UFO-Södertälje. These documents made me realize I have actually spent fifty years in the UFO movement. 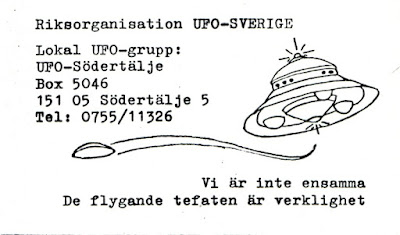 One Winter evening in the beginning of the 1960s, when I was around ten years old, my mother and I went for a walk to get rid of some bulky trash nearby our then place of living in Södertälje. It was a beautiful, starry night and mother told me about various constellations and stars. This awe-inspiring experience so greatly influenced me that I as soon as possible visited the local public library to borrow books on astronomy. In 1963 our family moved to a new apartment in Södertälje which made it possible for me to watch the sky from a very good position. I spent many nights there with a small telescope, studying the Moon and counting meteors. Mother constantly admonished me to not to stay out to long as I would catch a cold. During these teenage years I learned as much as I could about astronomy and the Greek and Roman myths and legends behind the constellations. 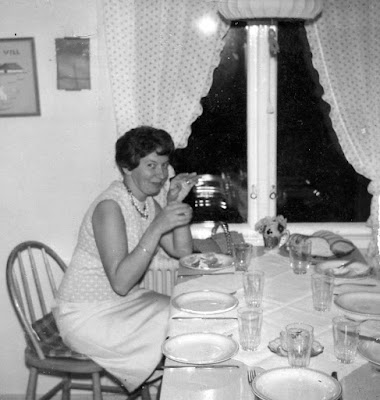 The middle 1960s was a very active and exciting period of manned spaceflights. I followed with eager anticipation the Gemini spaceflights 1965-1966, collecting press clippings and tape recording as much as I could from radio and TV. A teacher at school noted my dedicated interest and once I was even allowed to skip a lesson to make a tape recording.

My mother was from early in life a spiritual seeker and an avid reader. This deep interest was reflected in the library she built up at our home. There were books on Spiritualism, Theosophy, Anthroposophy, ancient mysteries and all the early UFO contactee books from the Swedish publishing house Parthenon. Authors like George Adamski, Daniel Fry, Ray and Rex Stanford, Elisabeth Klarer a.o. As a young teenager I discovered the books in our family library and became deeply fascinated by all these subjects, especially UFOs. Mother was somewhat apprehensive of my newly found interests but she was also happy that I shared her interests and we spent many evenings at the kitchen table discussing and pondering all the mysteries of life and the universe. 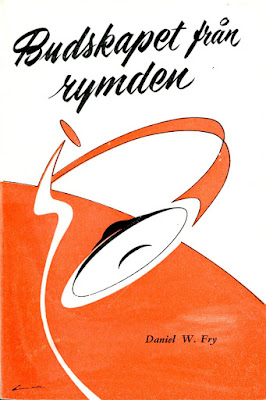 Swedish edition of Alan´s Message: To Men of Earth by Daniel Fry

Already as a young teenager I realized that UFOs, paranormal phenomena, spiritualism etc. were not the normal interests of my schoolmates so I kept my passion for mysteries to myself. Beginning in 1967 I worked part time, after school and Saturdays, at the Södertälje Public Library and here I became acquainted with Kjell Jonsson, who also worked part time at the library. We soon became aware of that we studied at the same school but not the same class. Because of our common interest in books friendship grew and we spent a lot of time together.

Although I hinted at my unusual interests it was not until the beginning of 1970 that I seriously introduced Kjell to UFO literature and gave him some contactee books to read. He became deeply fascinated by the UFO enigma and this of course gave our frienship a whole new dimension. In the Summer of 1970 we began contacting various UFO groups a.o. Svensk IGAP, the Swedish Adamski movement headed by Thor-Leif Dahnielson and we also wrote to the newly formed national organization UFO-Sweden, founded in April 1970. In the beginning we had no plans to found a UFO group ourselves as we both were heavily occupied with senior high school studies. We subscribed to the Swedish UFO journals aviable and corresponded with editors and directors. To my surprise Kjell Jonsson became even more active in his UFO interest than me, an avid reader of UFO literature and even entered a subscription to Flying Saucer Review. 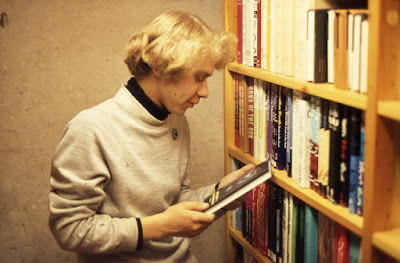 Kjell Jonsson, August 29, 1971, during one of our Stockholm journeys to buy UFO books

A seminal event in our interest was a letter, November 15, 1970 from Swedish contactee Mr. Sten Lindgren, then President of Intergalactical federation (IGF). Here in an  English translation:
"Best Cosmic Greetings, Håkan,
Thank you for your letter of November 10. We are affiliated with UFO-Sweden. Regarding further questions: Suggest a meeting in Stockholm on the following alternative dates:
Saturday, November 21, 4 p.m.
Saturday, November 28, 4 p.m.
You decide whether one of these alternatives is ok. Send us an answer as soon as you have accepted. We will meet at the place you decide in your letter, e.g. train from Södertälje or by car.
Awaiting your answer
The Best Cosmic Greetings from
Sten Lindgren"

On November 21, 1970 Kjell Jonsson and I went by train to Stockholm where we were picked up by Sten Lindgren och his co-worker Bjarne Håkansson. We were taken to Sten Lindgren´s apartement at Lidingö. Arriving at our destination we were soon made aware of that this was no ordinary Swedish home. In the hallway was a quote, pinned on the wall, taken from Howard Menger´s From Outer Space To You (p. 48): "We have much work to do on your planet among your people, and we must do it quickly - while there still is a planet and a people to work with". The walls of the livingroom were filled with photos, illustrations and charts all relating to UFO sightings. The books in the bookshelf were a mixture of contactee literature and metaphysics. 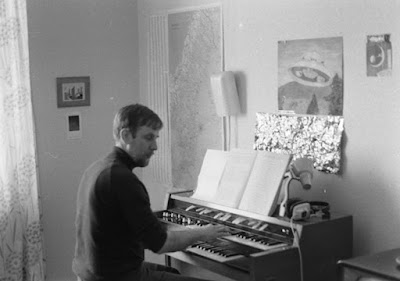 Sten Lindgren at the Clavilux 1971

Kjell Jonsson and I were seated on the sofa, nothing was said, and the lights were turned down. Sten Lindgren started playing "cosmic music" on a light-organ (Clavilux). After this introduction we were told that our meeting was arranged by the Brothers from space and that Sten was in both physical and telepathic contact with an extraterrestrial group. We were also requested to start a local UFO-group in Södertälje, affiliated with UFO-Sweden, as this national organization was supported by the Brothers.

As a naive and idealistic teenager I felt this was like entering Shangri-La. Meeting a man who, not only had observed flying saucers, but was in contact with the visitors and working with them. The meeting with Sten and Bjarne worked like a salvation experience and left me literally "high" for weeks. On November 25, 1970 Kjell Jonsson and I formally founded our local group UFO-Södertälje with constant advice from Sten, who claimed telepathic information from the Brothers. 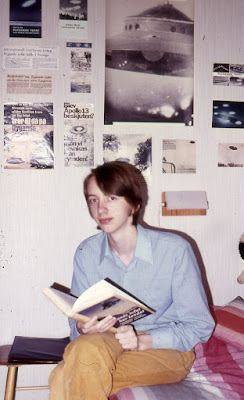 Me as a young UFO enthusiast January 1971

From the beginning UFO-Södertälje consisted of only two members, Kjell Jonsson and I but in March 1971 we started contacting local newspapers, writing letters to the editors, putting up posters in various places and from April 17 – 30, 1971 we had an UFO exhibition at Södertälje stadsbibliotek. Membership grew steadily and from having met at my parents apartment we were forced to rent a small basement premise to continue our meetings. Like most UFO groups in the 1970s we began skywatching hoping the space people would appear. UFO-Södertälje was very much a UFO and New Age group. We corresponded with Gabriel Green´s AFSCA, contactees like Marianne Francis and Hope Troxell. By the end of the year we were 16 members. 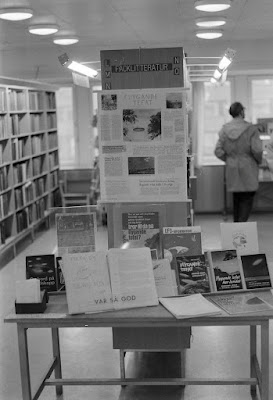 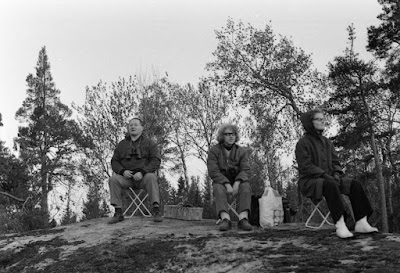 On January 20, 1972 I was interviewed in the local newspaper Länstidningen which created a large response from readers and resulted in many new members. We succeeded in finding a new habitat for the group and 1972 was the most active year for this local group with invited speakers, field investigations and meetings with other ufologists. I started publishing a small newsletter UFO-Bulletinen. UFO-Södertälje was changed to Södertälje UFO-Center and by the end of the year we had 50 members. 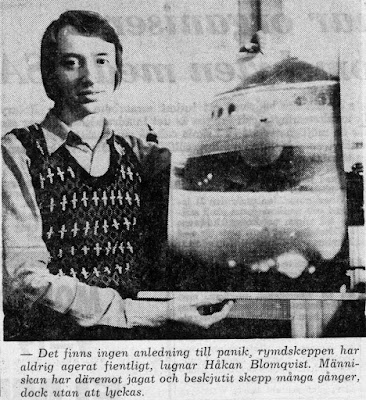 From article in Länstidningen January 20, 1972 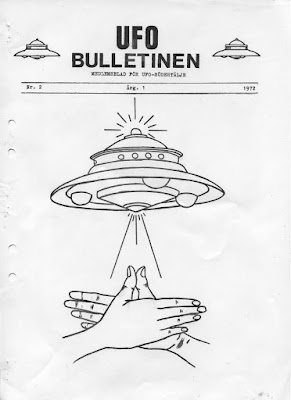 During the late Autumn of 1972 my UFO interest was heavily influenced by the writings of Jacques Vallee and John Keel and interest in keeping an ordinary UFO group going dimished as research and critical thinking became more and more important. Beginning in February 1973 Anders Liljegren, Kjell Jonson and I started to seriously consider the possibility of leaving UFO-Sweden and creating a new research oriented group. AFU, then Arbetsgruppen för ufologi (Working Group for Ufology) was founded on March 17, 1973. And the rest in history. which I have documented in many blog posts.

Looking back at fifty years in the UFO movement I can still feel the same fascination as when I was a teenager. The UFO movement has been homebase for me. Almost all my close friends I have found in the movement. For me as for many colleagues UFO research hasn´t been only a purely scientific problem but also involved a deeper spiritual quest. Trying to understand the mystery of our existence on this strange planet and the mystery of our consciousness.

From a philosophical or bird´s-eye view ufology is very much more than just simple identification of lights in the sky. It may take many years of field investigation and study but eventually you will probably arrive at the same conclusion as pioneer ufologist Jacques Vallee:
”…the history of ufology should be placed within an esoteric context. Throughout history there has been a tradition of higher knowledge, and the claim that it was accessible to us, if only we agreed to be tested, to work through certain spiritual problems… That´s the meaning of the hermetic schools. The UFO problem, the question of parapsychology, are central to this business. Looking for the solution isn´t just a scientific project; it´s a quest, an initiation, an enigma like that of the Sphinx…”.
(Jacques Vallee, Forbidden Science II, p. 211).
Posted by Håkan Blomqvist at Friday, January 03, 2020