Some Further Notes On "We Are Here"

George Hunt Williamson (1926-1986) is one of the most well known contactees of the 1950s. Often mentioned as a witnesses to George Adamski´s contact with a spaceman on November 20, 1952. But during several decades, after he left the UFO scene in 1962, he became a rather illusive figure. Not much was known or published of his activities. Williamson does not even have a personal entry in the first two UFO encyclopedias published in 1980: The Encyclopedia of UFOs, edited by Ronald D. Story and The UFO Encyclopedia by Margaret Sachs. Since then much new information on Williamson has surfaced. Of special interest are the biographies written by Michel Zirger, the latest called ”We Are Here” Visitors Without a Passport, which I reviewed recently. 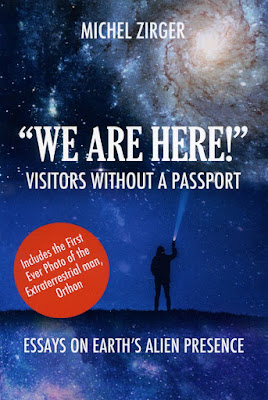 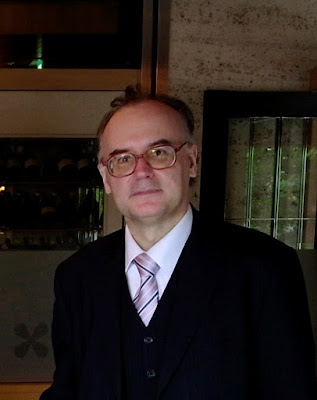 The authors second Williamson biography present a wealth of fascinating data never before published and also touches on so many side issues that I find it appropriate to add some further notes and comments. That George Hunt Williamson was an expert ritual dancer is probably not so well known. Michel Zirger narrates that he even won several competitions of dances, ”once even outclassing the best Sioux dancers” (p. 350). Between May 1951 and March 1952 Williamson lived with an Indian family of the Chippewa tribe in Minnesota. When reading Keyhoe´s book Flying Saucers Are Real during this period he noticed the links between modern flying saucer sightings and the legends he had collected from the Indians. During his stay with the Chippewa tribe Williamson had at least one mystical, visionary experience. In Zirger´s possession today is Williamson´s diary for this period, entitled Chippewa Diary.  Hopefully this diary will soon be published. 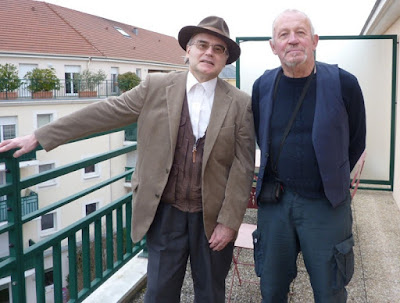 The older generation film aficionados will certainly remember American actress Jane Russell, a leading sex symbol of the 1940s och 50s. Starring in classic movies with Bob Hope such as Son of Paleface and Road to Bali. It may come as a surprise that George Hunt Williamson during his later years as Michel d´Obrenovic was a friend of several Hollywood film stars, among them Jane Russell. In 1973 he married actress Jennifer Holt and in 1974 officiated as priest at the wedding of Jane Russell to her third husband, in Santa Barbara. Always a mystic and religious man Williamson was ordained as priest in the Orthodox Christian Church 1971.

There has for many years been frequent rumors that George Adamski´s meeting with a spaceman in the California desert on November 20, 1952 had been filmed by a pilot from U.S. Air Force who had over-flown Desert Center during the contact. Michel Zirger mention an interesting incident revealed by George Adamski during a lecture at Caxton Hall, London on April 28, 1959 (p. 250). About one month after the desert contact a captain in the U.S. Air Force visited Palomar Gardens asking for pictures of the footprints and the plate with the famous writing from another planet, received by Adamski on December 13, 1952. When the Air Force captain returned he had made 10 x 12 enlargements for Adamski. But he also left his business card with the message ”Did you focus your telescope on me?”, implying that he was one of the pilots who had watched the contact from his plane. Adamski always kept this business card i his wallet. 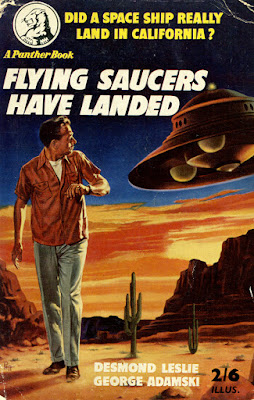 There is a confirmation of this claim made by contactee George Van Tassel, though not mentioned by Zirger. In his publication Proceedings 1956 Van Tassel writes: ”I was personally informed by an officer in Air Force Intelligence that George Adamski´s contact was filmed by Air Force personnel aboard one of the airplanes orbiting over the craft Adamski made contact with”. (Proceedings, vol. 5, no. 1, October 1956, p. 13). If this film exist it is probably hidden in the archive of some of the military intelligence organizations. Disclosure of this film would of course change UFO history.

While discussing some of the other contactees of the 1950s Zirger makes a short summary of the experiences of ”a mysterious Paul M.Vest”. He was a Santa Monica-based journalist who was a frequent contributor to Fate magazine in the 1950s and 60s. In June 1953 Vest was contacted by the ”Venusian” Bill and asked to promote the story of Orfeo Angelucci, which he did. Vest related what happened and his discussions with Bill in an article for Mystic Magazine, August 1954: Venusians Walk Our Streets. From an esoteric viewpoint this is one of the most informative and fascinating articles ever written on the contactee enigma. I find it almost inconceivable that, as far as I know, no research has been done on Paul M Vest, neither by ufologists, esotericists or academic scholars in Western Esotericism. 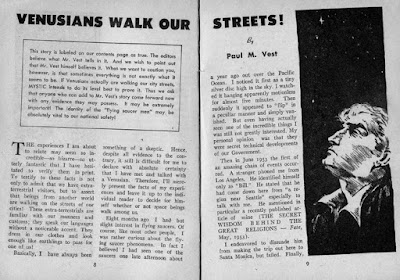 The article Venusians Walk Our Streets had a seminal influence on my research when formulating a version of Jacques Vallee´s Esoteric Intervention Theory. It supported my thesis that some of the UFO contactees of the 1950s were involved in a psychological-cultural influence test implemented by a group of benevolent aliens with access to Vimana technology. In Messengers of Deception (pp. 204-209) Jacques Vallee gave the essentially dark side of this theory while I have tried to formulate a more benevolent conspiracy theory from an esoteric viewpoint. Whether this theory can be validated depends upon further research and perhaps a new revelation from the boys upstairs or the Higher Intelligence Agency (HIA) of this planet.

In both Williamson biographies Michel Zirger has tried to understand and make an assessment of the channeled messages by George Hunt Williamson and other contactees. This unfortunately becomes the weak parts of the books as Zirger is obviously not well acquainted with the core Esoteric Tradition: Helena Blavatsky, Alice Bailey, Henry T. Laurency a.o.. Consequently he relates quotes from Guy Ballard of the I Am movement ( pp. 58-59) and British contactee George King (p. 322) as equal of interest with Blavatsky or Charles Leadbeater. But this is a very common mistake also made by academic scholars, often making no comment on the vast difference in intellectual and philosophical quality between various exponents of esotericism.

The psychologically unhealthy and dangerous philosophy of the I Am movement, founded by Guy and Edna Ballard in the 1930s, was exposed already in Psychic Dictatorship in America by Gerald B. Bryan (1940). Membership overlapped heavily with the fascist organization the Silver Shirts, founded by William Dudley Pelley. For students of esotericism this quote from the Inner Circle of Borderland Sciences Research Foundation is of interest: ”Do you remember two people who had a following even of millions, whose claims were false? (The Ballards). They gathered up the knowledge of many occult schools, they cast this knowledge forth upon the people with malice – and for gain. Yet well they knew what they were doing. It will take them thousands of years to repair this Karmic dept. Both Ballard and his wife knew what they were doing. They had occult knowledge, of course, but their claims and purposes were false and selfish. Money! All was sacrificed for money, for gain.”
(Memoranda From the Mark P. Seances, no. 1, November 17, 1946.) 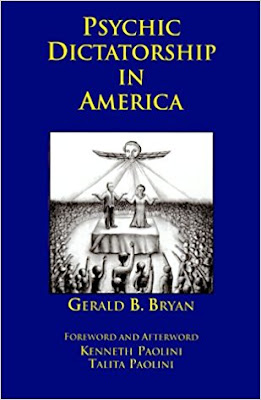 About this group, The I Am movement, created by Guy and Edna Ballard, The Tibetan D.K. made some harsh comments: ”It is this truth, misinterpreted and shockingly travestied, which lie behind the teaching anent the so-called Ascended Masters, put out by the leaders of the I Am movement”. (Alice Bailey, The Rays and the Initiations, p. 16).

George Adamski warned George Hunt Williamson to be careful regarding what channeled messages he accepted and followed. Their difference in this respect was the reason these two contactees went separate ways after a few months of co-operation. But Williamson did not heed the wise warning of Adamski but completely trusted his own channelings, the messages received by William Dudley Pelley and Dorothy Martin (later Sister Thedra). This resulted in a curious mix of esoteric concepts, mysticism and messages from space people. Williamson was from the beginning obviously involved in the contact test by the benevolent alien group but strayed far away because of his lack of discrimination in judging channeled messages.

In chapter two, The First Extraterrestrial Contact In Modern Times, Michel Zirger makes some controversial statements about George Adamski and Theosophy: ”In none of his known writings, or aviable lectures, did Adamski refer to any specific esoteric movement. He never mentioned any names of occultists, not event that of Helena Blavatsky… In fact, in some ways George Adamski´s teachings are the exact opposite of those of theosophy or any other Rosicrucian-type philosophy… He was definitely not a neo-Gnostic as was Williamson.” (63). 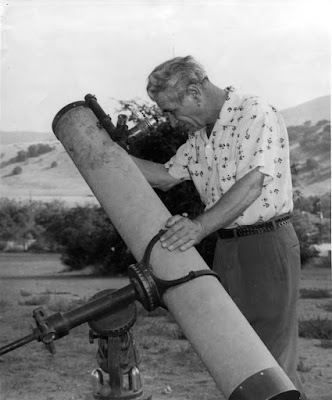 These statements by Zirger are somewhat misleading. It is correct that in his personal philosophy, especially as presented before his meeting with the space people, George Adamski can be described as a Christian mystic, including reincarnation in his teachings. But the philosophy Adamski received from the space people, and presented in Inside the Space Ships, is definitely esoteric or neo-gnostic. It is the esoteric worldview in a somewhat simplified form as also given to contactees like Orfeo Angelucci, Daniel Fry, Howard Menger a.o.

George Adamski did in fact mention Theosophy in his Private Group Lecture For Advanced Thinkers, in Detroit, Michigan, May 4, 1955: ”As I stated before, I am not a Theosophist, a Rosicrucian, nor anything…I took up Occult Catholicism because my father hoped I would become a priest which I decided against. I have since studied many philosophies and religions, but I didn´t become associated with any one particular religion.” (p.3) Adamski corresponded with several esotericists. In a letter to Riley Crabb, October 21, 1955, he wrote: ”Dear Mr. Crabb, Thank you sincerely for sending me a copy of your lecture review at the Honolulu Lodge of the Theosophical Society on August 30th. Your review was excellent and I am wondering what the results have been.”

These critical comments should not be considered as derogatory of Zirger´s biographies. The two books are of great value with much new and interesting information om George Hunt Williamson. And I do agree with the authors final conclusion: ”What I wanted to reaffirm in this volume is that the alien contact case of November 20, 1952, the very first encounter with a human-looking extraterrestrial entity to hit the headlines, deserved to be at least reexamined dispassionately through the fistful of factual elements we have at our disposal, and not through the bias, slanders, rumors and hearsay that almost all of the books dealing with the subject rely on.” (p. 317).