As a young ufologist in the 1970s I read How To Contact Space People by the American contactee Ted Owens. He told of his work with Space Intelligences (SIs) and how he with the help of these beings could produce strange weather events, lightning, hurricanes, drought, earthquakes, UFO appearances and assorted paranormal phenomena. Owens described the Space Intelligences as resembling small grasshoppers standing on two legs. Naturally I found the claims absurd and not worthy of any further study. But as is often the case with contactee appearances and claims, they are very deceptive. A second look and a more thorough investigation can reveal surprising information. 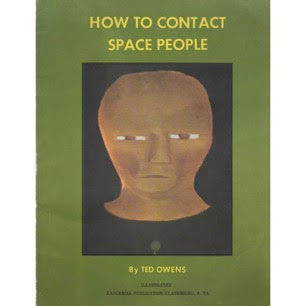 This problem is very well documented by parapsychologist Jeffrey Mishlove, Ph.D. in his biography of Ted Owens, The PK Man. A True Story of Mind Over Matter. Mishlove wrote his doctoral dissertation Psi Development Systems at the University of California, Berkeley, released as a Ballantine paperback in 1988. The PK Man is actually an updated version of an unpublished manuscript called Earth´s Ambassador, written together with journalist and author D. Scott Rogo in 1979. 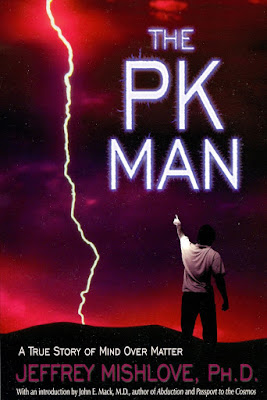 In the 1970s physicists Hal Puthoff and Russel Targ had developed an interest in the paranormal abilities of Ted Owens. But because their research at SRI International was already controversial (remote viewing) they decided that a promising young graduate student should continue the Owens investigation project. ”I was their candidate”, recounts Mishlove. ”But I did not know the price to be paid for opening up this seeming Pandora´s box of mystical powers. It is only now, a quarter century later, that the full story can be told – and, I hope, understood.”

Owens claimed that he had been abducted by Space Intelligences. They had operated on his brain which made him half human and half alien. As proof he used to show a thick crease at the base of his skull. But he did not regard the aliens as evil and affectionately called them Twitter and Tweeter. Because of the operation he was constantly in psychic contact with the Space Intelligences and had acquired paranormal powers which he regarded it was his mission to prove to the authorities and the world. Although in many respects a UFO contactee he never referred to the SIs as coming from another planet but always insisted they belonged to a higher dimensional realm.

Jeffrey Mishlove followed closely the career of Owens and carefully noted his claims and predictions. Although not always correct there were according to Mishlove too many incidents of weather control or influence to dismiss Owens as a charlatan. In the book is related several instances of correct predictions. The extreme weather conditions in Florida 1979 is an example with storms, record rainfall, drought and hurricanes. Mishlove concludes: ”… it certainly looks as though Florida´s 1979 weather was somehow manipulated by Ted Owens. The coincidences between the psychic´s pronouncements and the resultant changes in Florida´s weather are too numerous and exact to be dismissed.”

Owens himself was uncertain in interpreting the effects that he apparently produced. Whether it was his own psychokinetic powers or the Space Intelligences that was the cause. He made it clear that these intelligences were no ordinary space people. In one of his letters he wrote: ”… I figure that somehow I had managed to contact the essence of the intelligence behind Nature herself.”
Another facet of Owens abilities was producing UFO appearances at will and also teaching others how to make UFOs appear. They usually appeared as glowing balls of light moving in erratic ways. Mishlove presents an alternative theory regarding these manifestions: ”… were the UFOs that Owens and his acquaintances saw so often actually only materializations brought into existence by Ted himself? This possibility, I believe, is the one that must be taken seriously. And it is potentially more awesome than the simple physical presence of alien spacecraft.”

After studying Ted Owens for many years Jeffrey Mishlove concludes that an ”intelligent energy” worked with Owens producing various paranormal phenomena. He also concludes that this ”energy” can be dangerous and destructive in its effect on the psychic in contact with and using it. There are several examples in the book as when Owens in December 1985 warn Mishlove on the phone that the Space Intelligences ”really mean business. The will destroy the shuttle. It´s up to you to prevent it.” Mishlove was ”shaken to my bones” on January 28, 1986 when the space shuttle Challenger exploded, killing all seven members of the crew.

”Science is ill-equipped to explain the phenomena reported herein”, writes Mislove. This is certainly the case, especially with mainstream materialist, reductionist science. When reading about all the paranormal phenomena documented in The PK Man I can only lament that the author hasn´t discovered that there is a science of the multiverse that can be used as a working hypothesis – the Esoteric Tradition. Here we will find all these phenomena described with a detailed taxonomy of the entities and forces involved. In the chapter The Dark Side of the Force, Mishlove does once refer to ”the esoteric teachings of many cultures (reinforce) that the display of psychic powers is detrimental to the path of spiritual enlightenment”. (p. 205)

To me as esotericist it is obvious that Ted Owens had developed a contact with the deva evolution, which is probably the case with many UFO contactees. One good example is Uri Geller. According to the Esoteric Tradition ”The deva and human evolution will, during the next five hundred years, become somewhat more conscious of each other, and be able therefore more freely to co-operate”. (Alice Bailey, Letters of Occult Meditation, p. 182). But in esotericism there are also constant warnings about the danger and risks involved. Especially the devas of the air are high energy beings that can literally destroy the unwary pioneer. ”… it is not safe for the uninitiated to tamper with the parallel evolution of the devas, yet it is necessary and safe to investigate the procedure pursued by the builders, the methods followed by them, in reproducing from the archetype, via the etheric that which we call physical manifestation.” (Alice Bailey, Initiation, Human and Solar, p. 203). 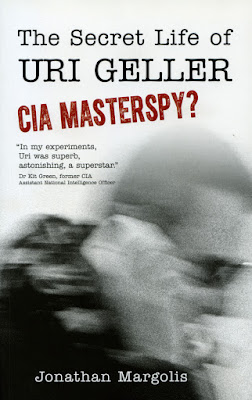 Creating UFO manifestations in the form of balls of light is a paranormal phenomenon more easily performed by anyone acquainted with the modus operandi of concentration and visualization. Possibly I succeeded in creating one of these UFO phenomena myself many years ago. In the middle of the 1970s I participated in a meditation group with Swedish contactee couple Sture and Turid Johansson. We experimented with distant healing, visualizing and concentrating on sending energy. One evening I decided to try this experiment on my then girlfriend, without her knowledge. She had a bad flu. I followed the usual modus operandi and then left it at that. Next morning she called me on the phone to relate a very strange experience. When she had gone to bed she noticed a ball of light that suddenly appeared in her room. This ball of light slowly entered her body and gave her a very good feeling. Of course I don´t know if I created this ball of light but it happened the same evening when I did my experiment.

Creating and sending these balls of light is often described by the Kahunas of Hawaii. The phenomena are called Akualele. Riley Crabb, director of Borderland Sciences Research Association (BSRA) 1959-1985 often described such incidents in his magazine Round Robin:
”During the four years I worked at the Naval Supply Center, Pearl Harbor I became well acquainted with one of the safety engineers, a Caucasian-Hawaiian from the island of Molokai. He knew of my interest in Flying Saucers and told me of his own early childhood experiences with Akualele. He had an uncle who was one of the 57 varieties of Kahunas. By appropriate rhythmical breathing and chanting this uncle could call up an Elemental and give it a temporary form in the shape of a glowing ball of light. Another Kahuna across the valley had similiar abilities. They were probably initiates of the same Mystery School. They were . friendly rivals, too, and to entertain themselves - and show off their prowess - in the long Molokai evenings, these pagan sorcerers would create highly charged globes of electrical ether and send them back and forth between them! The enginner told. me of those long-remebered nights there in the tropic darkness of his home island, sitting at a respectful distance from the Kahuna, and watching open-mouthed as the ghostly, glowing globe came floating down out of the darkness.” (Round Robin, vol. 18, no. 3, April 1962, pp. 30-31)

The PK Man is an excellent documentation of the wide variety of UFO and paranormal phenomena and the problems facing critical investigators when confronted with individuals like Ted Owens. It takes courage to enter into this type of research as demonstrated by Jeffrey Mishlove in his book. Allen Hynek, who considered Owens` powers to be subconscious in nature once said  he wouldn´t ”go near him with a ten-foot pole”.