The golden era of UFO contactees, the 1950s, is still in many respects an uncharted territory when it comes to serious research and documentation. A pioneering effort was made by Lou Zinsstag and Timothy Good in George Adamski. The Untold Story (1983), followed by New Zealand journalist Tony Brunt´s George Adamski. The Toughest Job in the World (2010). A very interesting biography, Contactee. Was Daniel Fry Telling the Truth?, was published by Sean Donovan in 2013. But still there is no in-depth documentation or biographies of Orfeo Angelucci, George and Dorris Van Tassel, Paul Vest or Howard Menger. 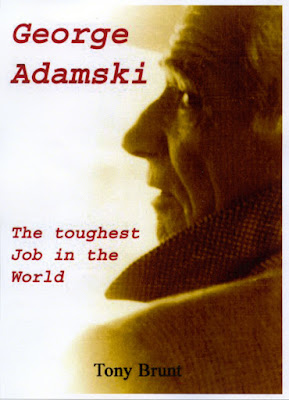 It was therefore with great anticipation when, about a year ago, I received a review copy of The Incredible Life of George Hunt Williamson by Michel Zirger and Maurizio Martinelli. The book is an impressive, 395 pages, documentation based on fifteen years of research and rare archival material, notebooks, correspondence, photos etc, acquired by Michel Zirger. When reading the book I soon realized that reviewing this work was not an easy task. It is not very well organized. There is no linear narrative and the two authors mix events, biographical data and personal theories in various chapters. Eight chapters are written by Zirger and five are from the pen of Martinelli. Another problem was the seemingly uncritical endorsement of the teachings and claims channeled by George Hunt Williamson. In this respect the biography is more like a hagiography. I let the book rest on my shelf but finally decided that this important documentation should be reviewed not just as another UFO book but evaluated also from an esoteric viewpoint. 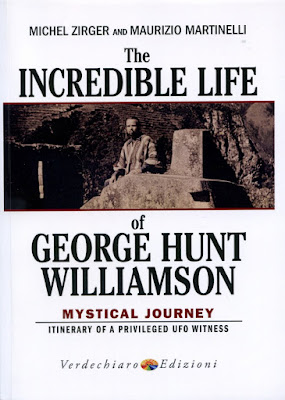 In UFO history George Hunt Williamson (1926-1986) is perhaps best remembered as one of the six witnesses to George Adamski´s meeting with a Venusian in the California Desert on November 20, 1952. All his life Williamson asserted the veracity of this contact experience as documented with several quotes by the authors. During a lecture in Sao Paolo, Brazil on July 21, 1958 one of the listeners asked him about this event and whether he really observed the cigar-shaped ship over Desert Center: ”The answer is easy, yes! And all other persons present also. It was rather high in the sky, but I was able to observe it for a long time through binoculars. It was a large silvery, metallic-looking cigarr reflecting th sun… And let me anticipate the other question that certainly someone will ask me: yes I did see George Adamski talking in the distance to ”someone” , whom you know now under the name of Orthon… the account of the events made by Adamski in Flying Saucers Have Landed is accurate and true”. (p. 160-161). 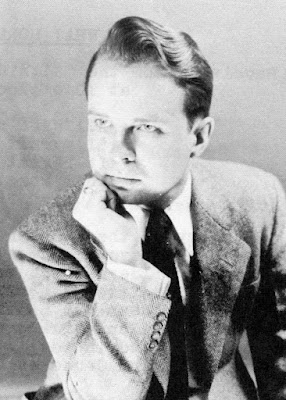 It is reasonable to assume that Williamson´s participation in this historical contact would have resulted in many years of friendship and co-operation with Adamski. But this was not so. As Michel Zirger narrates the association with George Adamski lasted only one month (p. 99). The reason being a difference of opinion regarding the reliability of channeling. Adamski always urged his co-workers not to accept channeled messages indiscriminately: ”You can never check on the sender of a trance message. Every mock spirit or evil impersonator could come and tell you that his name was Ashtar or Aetherius and that he lived in a space ship. I think that these entities are having a heyday leading astray the gullible mediums and their public… This is not to belittle mediums in any way, but it is to say that most of them have much to learn before they can be sure of just what they are receiving, and from whom and where.” (Zinsstag & Good, George Adamski – the Untold Story, pp. 55, 57).

Unfortunately George Hunt Williamson did not heed this wise warning from Adamski but chose a very different path. On November 20, 1953 Williamson met William Dudley Pelley (1890-1965) who from now on became his ”intellectual guide” (p. 204) and ”inspirational master” (p. 313). A very unfortunate choice of ”master”. After an out-of-body experience in 1927 Pelley started channeling various entities via automatic writing. Inspired by Adolf Hitler´s National Socialism and his channeled messages Pelley in 1933 founded the Silver Legion, better known as the Silver Shirts, modelled after Hitler´s Brown Shirts. Because of his politial activities Pelley was charged with high treason and sedition and spent seven years in prison. After release in 1950 Pelley moved to Noblesville, Indiana where he founded Soulcraft Press and the magazine Valor. During four or five month in 1954 Williamson worked as associate editor of Valor magazine and chief of the research laboratories at Soulcraft headquarters. 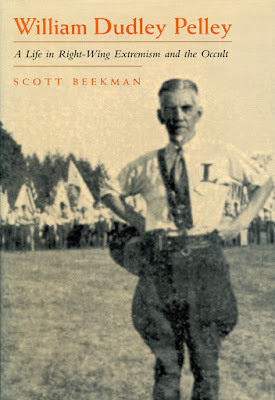 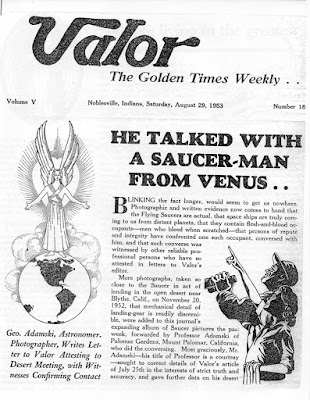 In connection with a lecture in Detroit, December 1954, Williamson found ”the second important association” in his life, Dr. Charles Laughead and his wife Lillian. This meeting developed into a long friendship. Together this group held many channeling sessions with Williamson as medium and Lillian Laughead as scribe: ”After putting himself in a meditative trance,George Hunt Williamson served as a channel for various extra or supra-terrestrial entities who expressed themselves through him, each with voices stunningly different from his own. Perhaps the most notable among them was the enigmatic ”Brother Philip”, affiliated to the no less enigmatic ”Monastery of the Seven Rays”, supposedly hidden in the heart of the Andes.” (p. 103). Dr. Charles Laughed and his wife also became involved in the famous failed prophecy of channeler Dorothy Martin (later Sister Thedra) who predicted the end of the world in a great flood on December 21, 1954. The activities of this group were documented in the classic social and psychological study When Prophecy Fails (1956). 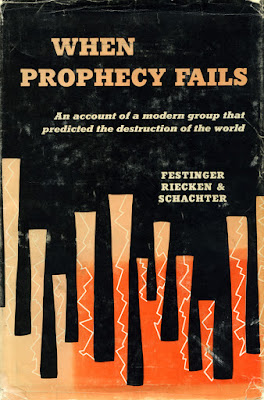 Undeterred by this failed prophecy the group continued receiving messages from various ”Ascended Masters” such as Lord Aramu-Muru and ”El Morya”. Because of a message received in 1956 they decided go to Peru to search for The Monastery of the Seven Rays and to establish a new age center The Abbey”, as an outer expression of the master´s work in South America. With this end in view the members of the group sold their property, left their jobs and headed for Peru, George Hunt Williamson and his wife Betty Jane, the Laugheds and Dorothy Martin. The activities and life in this monastic community established by the group is very well documented by authors Zirger and Martinelli. Much of what happened during the years 1956-1958 has not been known in such detail before. Betty Jane died on August 11, 1958 and Williamson was forced to return to Arizona. The Abbey was then for a while headed by Dorothy Martin or John McCoy. 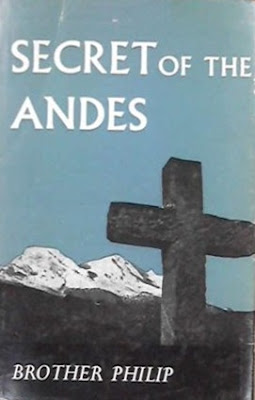 George Hunt Williamson wrote several books in the 1950s that today are minor underground classics, such as The Saucers Speak (1954), Other Tongues – Other Flesh (1957) and UFOs Confidential (1958), co-authored with his friend John McCoy. His last book written using the old name was Road in the Sky, published in 1959. When Williamson disappeared from the contactee scene in 1961 there was much speculation of what had happened. In 1960 he legally changed his name to Michel d´Obrenovic and claimed to be a descendant of Yugoslavia´s royal family. The last book from Williamson, Secret of the Andes (1961), was written under the pseudonym Brother Philip. Between 1961-1986 few ufologists knew of his activities. In chapter 4, The ”Hidden Years” of Williamson, Michel Zirger has made a commendable effort in documenting what transpired during these years. Always a religious man George Hunt Williamson was ordained a priest in the ”Orthodox Christian Church” and settled in Santa Barbara, California. 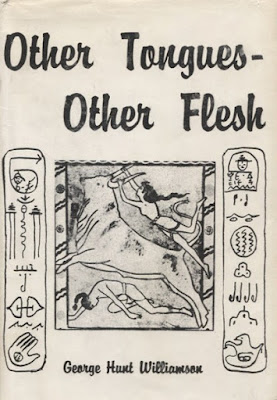 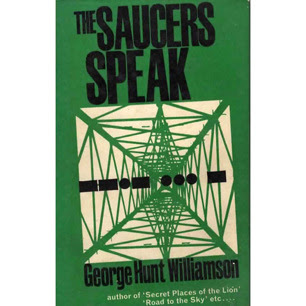 As already noted reviewing this book is no easy undertaking. There is an immense amount of research work involved with lots of never before published facts and documents of great value to all researchers, whether ufologists or academic scholars. More problematic is the authors uncritical acceptance of the channeled messages by Williamson, Dorothy Martin (Sister Thedra) and others in the group. Maurizio Martinelli does make some reservations in his Introduction when discussing ”the ultimate source of the various types of messages which Williamson had received… themes that must be approached with great caution” (p. 37).

Unfortunately no such caution or critical discussion can be found in the book. And this is the weak part of this otherwise pioneering work. Any accomplished or erudite esotericist reading the channeled messages of Williamson or Dorothy Martin will immediately notice that this is either astral entities masquerading as ”ascended masters” etc or information coming from the subconscious mind of the channelers. A mixture of Theosophy, spiritualism and mysticism. This is the most common mistake made by students of esotericism – lack of discrimination. The books and channeled messages by George Hunt Williamson is a curious mixture of mysticism and genuine esotericism (the science of the multiverse). John McCoy appears to be the one in the group best aquainted with the more academic Esoteric Tradition, mentioning Blavatsky and Alice Bailey in part II of UFOs Confidential, co-authored with Williamson. 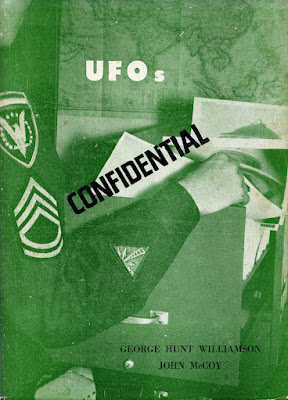 Brother Philip and the Monastery of the Seven Rays are most certainly pure fiction. But these myths have had the unfortunate result that South America is now plagued with various cult groups. According to a report  in the London newspaper The Guardian, November 15, 1986 there are hundreds of new age sects in Peru and Bolivia. An interesting question is whether there could be a real ”safe retreat” or ”protected area” used by the Planetary Guardians in the Andes?

On January 27, 1984 I received a letter from American esotericist Dane Rudhyar regarding a question I had asked about the mystic Brown Landone (one of George Hunt Williamson´s sources): ”I regret to say that I have at present no printed material from Brown Landone, who I never met. I only read many years ago an article or two he had written about the transfer of some of the great planetary Beings from Tibet to the Andes. Apparently they were expecting the Chinese conquest and possibly some other changes not yet experienced as yet. Landon´s assertions were confirmed to me by a person I was close to and who has passed away many years ago, but who should have known at least the basic facts.” There is also an interesting reference in the remarkable work Through the Curtain by Viola Petitt Neal and Shafica Karagulla. Regarding a center in the Andes mountains Viola Petitt Neal is informed by her teacher during a Night Class December 10, 1961: ”… there is a center there where people live. I don´t know anything about it, but there are people in it.” (p. 261).

The Incredible Life of George Hunt Williamson is a book I can recommend to all serious UFO investigators, in spite of my somewhat critical remarks. It contains a treasure trove of rare and hitherto unknown information about the contactee movement of the 1950s and unique insights into the life of one of the key figures in UFO history.
Posted by Håkan Blomqvist at Wednesday, July 12, 2017