Kelvin Rowe and the Esoteric Tradition

In the 1970s Timothy Good and Lou Zinsstag travelled around the United States interviewing several of the first generation UFO contactees. The interviews were taped and some years ago Timothy kindly sent me some of these transcipts, which I mentioned in my blog entry on Howard Menger. On August 22, 1976 they met and interviewed Kelvin Rowe and his wife. Rowe is not as generally well known as other contactees but was a frequent lecturer in the 1950s and 60s. He lectured at the Giant Rock Spacecraft Conventions 1957-1959. His book A Call at Dawn was published by Daniel Fry´s Understanding Publishing Co. in 1958. 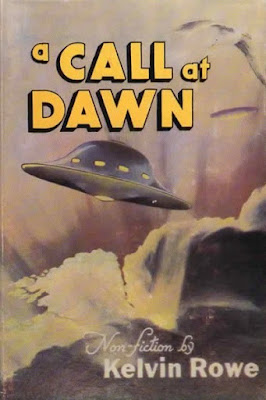 I have advanced the theory that some of the original 1950s contactees were authentic and involved in a psychological, sociological test implemented by a group of benevolent visitors from somewhere, probably extraterrestrial. Involved in this test were a.o. George Adamski, George and Dorris Van Tassel, Orfeo Angelucci, Paul M. Vest, Eugene Drake, Daniel Fry and Howard Menger. Could Kelvin Rowe also have been a part of this test?

The story and experiences  told by Kelvin Rowe are in general the same as the other contactees. But Rowe was interested in flying saucers before his first contact and had met George Adamski and Truman Bethurum already in 1953. The first experience was by telepathy on March 9, 1954, as described in his book: ”I was on my way to San Bernardino, Calif., driving a Ford pick-up. I was thinking I would visit a friend of mine in Redlands on my way home, when the word Pluto popped up into my mind and was repeated three times. The words that followed were not too distinct at first, evidently due to my inexperience with and lack of understanding of the use of mental communication.” (p. 33) 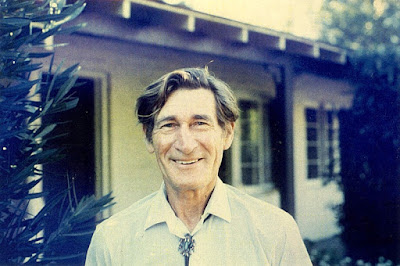 After eight months of many mental communications Rowe had his first physical contact with two ”Brothers”. ”They were fine looking men, with smooth, dark sun-tan complexions, and dark hair styled in longer length than our modern cuts… The iridescent material of their form-fitting garments, similar in style to our ski-suits, was unusually soft to the touch, firm but beautifully textured. (p. 135) After this first contact he met the space people frequently, either at home or was taken up in their space craft. According to Rowe he encountered both men and women and most of them came from Jupiter and Pluto. 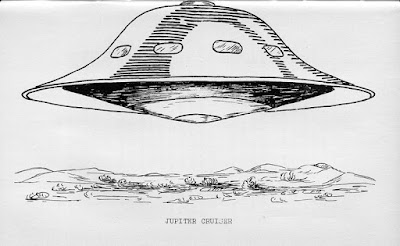 Illustration from A Call at Dawn

During the interview in August 1976 Timothy Good and Lou Zinsstag asked Rowe some more details of his contacts: ”All the trips that I have made has been in the small craft. They have taken me to a small craft in a car, and then the car is left there on the ground, and someone else drives off with the car – there´ always one man left with it.”

”Lou: How many people are in them?
Kelvin: Generally five and six – on these small craft.
Tim: I don´t know if you´ve seen those particular pictures (Rodeffer TG), but that´s 27 ft according to NASA. Were yours of similar type of…
Kelvin: The ones I went on were just a little bit larger than that. But it would be in the same area…
Tim: They have these spheres underneath do they?
Kelvin: Well no, they didn´t have these landing gears of that type. But some of them do; I have seen them with that. But the ones that I was on, mostly they had one that after they were going to land – if they´re actually going to land – it would protrude down to touch the earth. But as I say they very seldom did that because when they once contact the earth then it takes more force for them to break lose. They generally just set there and hover…”

Like the other 1950s contactees Kelvin Rowe sometimes encounter the visitors, dressed as ordinary earth people, mingling in society. He also claims to have been taken to Mexico in their craft as well as below the oceans. In A Call at Dawn is mentioned that ”Our Brothers are operating on an entirely different frequency or spectrum than we are here as third dimensional beings.” (p. 111) Not very much has been written about Kelvin Rowe, nor has there, to my knowledge, been any in depth investigation of his claims. On the internet transcript of an interview that was made in March 1991 is published but it gives very little new information. I wrote a letter to Rowe in 1984 but received no answer.

The message from the space people, as presented in A Call at Dawn, is in general the same as coming from other contactees, but with one marked difference. Kelvin Rowe was deeply involved with the Brotherhood of the White Temple, situated in Sedalia, Colorado, founded by Maurice Doreal, real name Claude Dodgin. In the 1976 interview with Tim and Lou he relates: ” I have a doctor´s degree – but I got this from the Brotherhood of the White Temple. I studied for this. Now, this doctor´s degree I got gives me the right to teach philosophy and metaphysics but that´s all. It´s not a scientific degree of any kind and it´s not nothing to brag about or anything.”.

I his book Rowe claims that the space people suggested he study the material from this brotherhood. They even ”approved of it as being the highest source of Truth teachings aviable in the Western Hemisphere.” (p. 46) A call at Dawn is dedicated to ”Mr. George Adamski through whom I was led to realize the true reality of interplanetary visitors; and, to Dr. M Doreal whose teachings have shown me The Way.” Rowe´s book is full of quotes from various booklets written by Doreal and sometimes messages from space people are actually verbatim quotes from Doreal, although not mentioned, especially from his booklet Flying Saucers. An Occult Viewpoint, probably published in 1956. 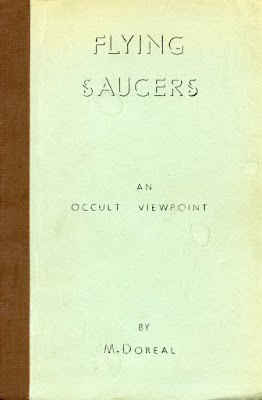 This connection puts a great question mark on the claims and teachings of Kelvin Rowe. If he really met highly advanced space people they would never have referred him to Maurice Doreal, a very dubious character in the occult community. His claims and teachings are a travesty of the Esoteric Tradition. Noteworthy is this information from Borderland Sciences Research Associates who once asked the Inner Circle about Doreal: ”Concerning this Doreal. His claims are not true. Certainly, he has a large following. Do you remember two people who had a following even of millions, whose claims were false? (The Ballards). They gathered up the knowledge of many occult schools, they cast this knowledge forth upon the people with malice – and for gain. Yet well they knew what they were doing.” (Memoranda From the Mark P. Seances, no. 1, November 17, 1946. About this latter group, The I Am movement, created by Guy and Edna Ballard, The Tibetan D.K. made some harsh comments: ”It is this truth, misinterpreted and shockingly travestied, which lie behind the teaching anent the so-called Ascended Masters, put out by the leaders of the I Am movement”. (Alice Bailey, The Rays and the Initiations, p. 16).

The claims of Maurice Doreal are a strange mixture of esotericism and pulp magazine fantasy. In an 1946 interview for the Rocky Mountain News he stated: ”I saw atomic energy at work several years ago when the Dalai Lama of Tibet entered me into the Great White Lodge 75 miles under the Himalayas.” (Walter Kafton-Minkel, Subterranean Worlds, p. 155). When pressed about his travel claims he said he travelled through astral projection. In the Weekly Sermon Lesson for November 8, 1981 Doreal writes: ”In the astral plane certain entities, forces and powers live. It is there the throne of God is, - it is where the Holy City of the Book of Revelations is found… In the astral are the treasure-houses and there all things man does are indelibly recorded on the Akashic record.” These statements prove that Maurice Doreal is no esotericist but one of many occultists who have, in astral travel, totally misinterpreted his experiences in what esotericists clearly recognize as the plane of illusion. 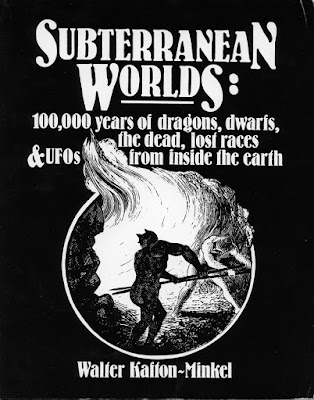 In the 1940s Doreal was interviewed in several newspapers and magazines, sometimes photographed wearing gold robes, seated on a silver throne that he claimed was previously owned by Emperor Maximilian of Mexico. In 1946 Doreal made this prediction: ” The coming Avatar is now living in Tibet; he is a little over 15 years old. He was born in America, of American parents - and will make his appearance at high noon, May 2nd, 1956, at the corner of 42nd St. and Broadway, New York City. The sun will then be blotted out, but a golden rose-light will spread over everything; a great ray of two unknown colors will descend upon Him from the skies, and for 100 miles around, all sickness will be instantly healed.” (Round Robin, vol. 2, no. 7, July 1946, p. 18).

Although Maurice Doreal claimed there existed guardians from space, Kelvin Rowe must have been surprised by this revelation from Flying Saucers. An Occult Viewpoint: ”The flying saucers are a menace to civilization. Believe me, they are not the Venusians or Martians who are coming here to have friendly relations with earth, regardless of what some of the books tell you. I am not saying there hasn´t been anyone riding in them but it hasn´t been anyone in this country.” (p. 36). According to Doreal these flying saucers were manned by the serpent people who could change their appearance to look like ordinary people: "These Serpent People had a body like a man though covered with thin scales and the head of a great snake. They had the power to cause that head to assume human form in the likeness of anyone that they wished". (p. 41)

With this complicated background how are we to interpret the claims and experiences of Kelvin Rowe? At the first international convention of Amalgamated Flying Saucer Clubs of America in 1959 Rowe lectured on "My 350 Trips Into Space". Hardly a trustworthy claim unless he meant astral travels, like his mentor Doreal. To Timothy Good and Lou Zinsstag he appeared sincere. As far as I know there are no witnesses to his contacts nor any photographs of space ships. We only have his story. As he met George Adamski before his first contacts could he simply have been an Adamski copycat, who used the contactee platform to spread the Doreal teachings he believed in? Or was he an authentic contactee, involved in the visitor´s psychological test, but made a personal mixture of messages from the visitors and his occult beliefs? His book is filled with messages of goodwill and philosophy, often in accordance with the Esoteric Tradition. Perhaps further research by American investigators can find clues to the enigma of Kelvin Rowe.