In my life I have met many interesting and extraordinary personalities. Some have been basically mentors and others both friends and mentors. In this last category I include the couple Sture and Turid Johansson, often mentioned in older blog entries. I first met Sture and Turid in late Autumn 1972 and we immediately became very good friends. They freely shared their many and sometimes frightening UFO and close encounters. The rather unusual and varied experiences of Sture and Turid was what actually inspired me to begin in depth investigations of the often complicated and controversial physical contactee cases. Foremost the enigma of Richard Höglund.

Sture and Turid Johansson had been involved in UFO and spiritualist circles for several years before I met them. They were spiritual searchers studying different teachers and traditions. After a lecture at Stockholms UFO-Center in 1973 Sture and Turid began meditation meetings at their home in Lidingö, Stockholm, with a group of members from the UFO society. In November 1973 I was invited to attend these meditation sessions. We met every Friday night for about three years and became a very tightly knit group and close friends. For me this group was especially important as I was troubled by personal problems during the Spring of 1974. 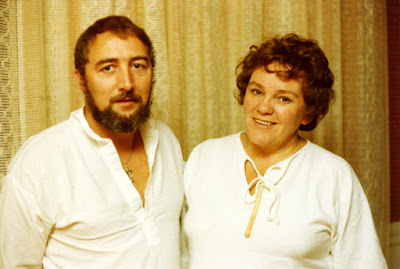 We all became fellow spiritual seekers in the meditation group, studying a.o. Helena Blavatsky, Rudolf Steiner and discussing all aspects of philosophy and paranormal phenomena. These were joyous and inspiring gatherings.  Although the subjects discussed were serious we often joked heartily and rather irreverently about spiritual teachers and ourselves. As almost all of us were active in various UFO, parapsychological and spiritual organizations we referred to our group as The Occult Mafia.

We often gathered together at holidays, New Year´s Eve and other occasions. We had summer parties, visiting lectures, exhibitions and interesting persons among our acquaintances. One evening we spontaneously decided to place our meditation session deep in the forest, a few Swedish miles south of Stockholm at a place called Paradiset, the Paradise. After having walked in the dark forest for about a mile we arrived at a small lake, Trehörningen. There the group settled together, meditating and gazing at the beautiful night sky filled with stars and occasional meteors. It way an awe-inspiring evening full of magical beauty and mystery. Many times later we gathered at this place for recreation and bathing in the lake, a few times sleeping in a lapp cot or tepee built close to the lake. 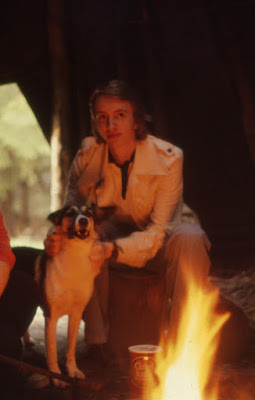 Me in the lapp cot (tepee) at Paradiset, August 1974. the dog belonged to Sture och Turid 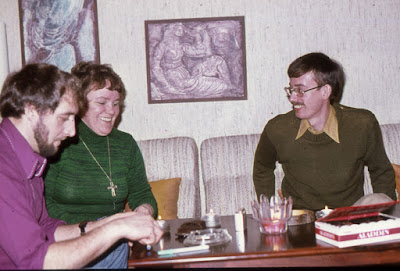 I came to know Sture och Turid Johansson very well and we spent many evenings at my small one room apartment in Sundbyberg, discussing and trying to understand the many facets of the UFO enigma and of course their own close encounters and contacts. Often during these evenings we were joined by our good friend Åke Franzén, one of the few Swedes to have personally investigated the famous Mothman in West Virginia. Åke was a volcano of good spirits coupled with an intense thirst for knowledge of all aspects of UFO and paranormal phenomena. Our gatherings were full of joy and laughter and will forever be cherished in my memory. 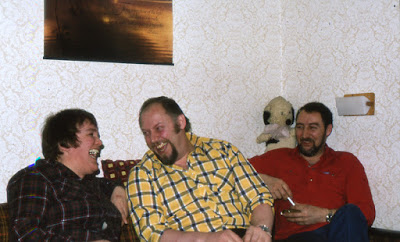 A seminal event occurred during our meditation meeting on November 19, 1976. Turid told the group that Sture had recently begun going into a trance state and a spirit, Simeno, had started talking through him. Although members of the group had read about many paranormal events we were all somewhat apprehensive when Sture started to gasp and shake, rised up and a completely foreign voice came from his lips. The voice greeted us and told us not to be afraid.

The trance communications marked the beginning of the end for the meditation group. Sture och Turid Johansson became more and more involved in spreading the messages from Simeno, and later an old Egyptian calling himself Ambres. In 1976-1977 I participated in several trance sessions at the home of Sture och Turid and hade many long conversations with Ambres. I taped these sessions and they became important as they taught me a lot of how trance communication works and the problem of interpretation.

The teachings of Ambres became very popular and soon a group formed around the couple. In the 1980s Sture och Turid moved to the north of Värmland, building a center attracting many followers who came from all over the world to listen to the Ambres teachings. Sture became very famous in the 1980s when celebreties like Shirley MacLaine and Dennis Weaver visited the center in Sweden. Sture and Turid travelled around the world and I have letters and postcards posted from California, Hawaii and Mexico. Sture also figures in the miniseries Out On a Limb from 1987, based on the bestselling book by Shirley Maclaine. It was perhaps inevitable that our meditation group should split up and the members chose different paths in life. The group had served its purpose and our respective dharma made us chose different roads and spiritual traditions. For me the way ahead meant an extensive study of the Esoteric Tradition, especially Henry T. Laurency and Alice Bailey. 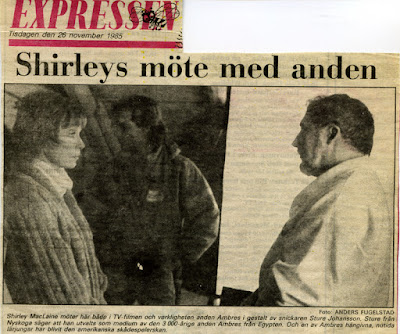 Listening to the taped trance sessions and reading the books written by Sture Johansson I noticed very early that the teachings of Ambres reflected the ideas we had discussed in the meditation group and corresponded clearly to the personal philosophy of Sture and Turid, a mixture of mysticism, spiritualism and Theosophy. Nothing really new came from Ambres. Turid was very much influenced by the doctrine of Mentalism, a form of advaita subjectivism stating that material reality only exists in our minds. In the words of Ambres: "The first four dimensions exist only if someone experience them. The beholder is Man. It is you who have created this room". We also find statements like: "This is not a teaching you should cultivate with your intellect" - "We should never compare teachings". I state this not as debunking criticism because the teachings are in many respects inspiring, beautiful and have probably helped many people to a more positive lifeview. There is no fanaticism, life-negating asceticism or political extremism presented. 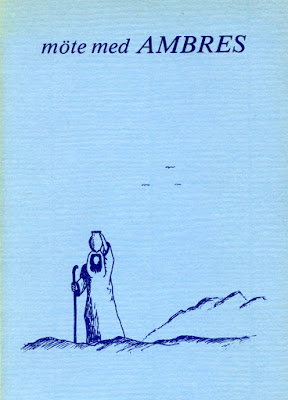 Swedish book with the Ambres teachings

What would be my interpretation of the teachings and identity of Ambres today? Although the word esoteric is sometimes used in the teachings the philosophy presented is not esoteric, except with regard to some basic ideas. The intellectual and scholarly esotericist would immediately notice the differences. Besides this fact the adepts or the planetary guardians never use trance channelers with no control of who is communicating. To understand this phenomenon from an esoteric viewpoint I use my standard reference works in the multiverse science. A very good presentation and reasonable explanation can be found in two books by Alice Bailey. Students should read From Intellect to Intuition, pp. 243-249 (clothbound ed.). Here a few quotes relative to the problem of meditation and entity communication: "Again, some "force" - a word frequently used - or some entity comes to the student, as he meditates, and outlines to him some great work that he has been chosen to do; some world message that he has to give and to which the whole world is to listen...Should an apparition appear to him, therefore, and should such an entity make platitudious comments, he will use the same judgement as he would in business or ordinary life... He would probably laugh and continue with the activity or duty of the moment"... The world of illusion is full of these thoughtforms, constructed by the loving thoughts of men down the ages. Regarding channeled messages some further information is found Telepathy by Alice Bailey pp. 75-77: "These messages are normally innocuous, sometimes beautiful. because they are a mixture of what the recipients have read and gathered from Christian sources and the Bible." From the viewpoint of the Esoteric Tradition the identity of Ambres could be either a subconsciously created fantasy personality or an astral entity masquerading as an Egyptian sage.

Sture and Turid eventually separated while Sture continues his work and teachings in Värmland with a new partner. Turid died in October 2010. She will always stay in my memory and I cherish the varm friendship and many joyous meetings we had together. In several respects both Sture and Turid became my teachers and mentors and I am grateful for our time together.